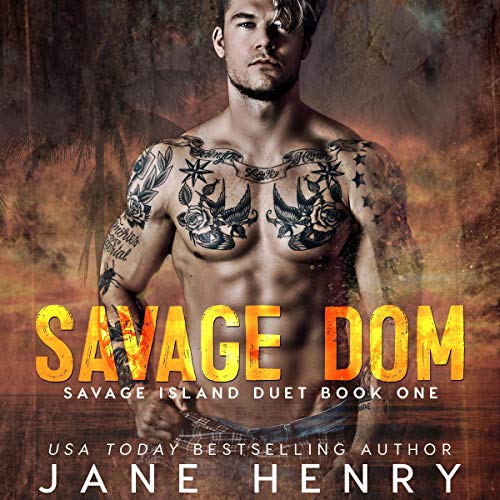 He was one of six. The biggest, the bravest, the most brutal. Programed to discipline. Dominate. Destroy.

It's a fight to the death. Only one will survive.

But there's one complication. Me.

What listeners say about Savage Dom

Being stranded on a deserted island can't be all bad, can it? Harper is left stranded on an island when the cruise ship she is on leaves her behind. Is she alone? Cy has been on the island for an undetermined amount of time and saves her from a brutal attack. Now together, these two experience the inexplicable happenings around them. Will they find food? Where are the other men who were left with Cy? Why would the cruise ship leave Harper behind? And what will happen to them? Jane Henry has masterfully crafted the first part in this duet with a sense of thrilling suspense and arousing desire. The island is like paradise in one instance and is perilous in the next, but the chemistry between this alpha male and submissive woman never falters. It's hot, thrilling and leaves you wanting book 2!

Read to us by DC Cole, the story comes to life. Cole has a voice for every character. He has a delicious rasp to his voices that lends Cy that dominant feel and can easily transition to the female Harper in an instant. I can't wait til we hear him in the conclusion of this duet!

“I’m the predator and she’s the prey.”

I am OBSESSED with survival romances and SAVAGE DOM by Jane Henry about two castaways who are mysteriously stranded together on a remote caribbean island was absolutely mesmerizing!

PREMISE:
Harper Lake, a fiercely independent journalist who has devoted her career to championing women’s rights, ends up in dire straits after she wins an all-inclusive cruise vacation but gets left behind on a deserted island! However, when all seems lost, she finds an unlikely savior in Cy, a gruff, growly military operative who has no clue how he ended up in this island but all he knows is that something is definitely amiss. Strange things are happening and his gut tells him they are being watched. But by whom? And now after witnessing four others castaways die before his eyes he’s not about to let this ornery, defiant beauty die on his watch! As a man who commanded army of men, he’s deeply dedicated to discipline and order and is used to being obeyed. And has little tolerance for this haughty, mouthy beauty who doesn’t have a clue how to survive on this island, but at the same time, she poses a challenge that tantalizes him more than he cares to admit.

Meanwhile, this bearded brute's bossy, overbearing ways goes against all of Harper’s feminist ideals, yet she needs this big, strong cavemen’s finely honed survival skills to keep her alive! And when they reluctantly team up to get to the bottom of the happenings on the island, and hopefully find their way OFF of it, their sizzling friction erupts into raw, primal passion! But can Cy keep them both safe from the sinister danger that runs amuck on their tropical island “paradise”?


MY MUSINGS:
This wildly addictive, brilliantly penned first installment in the Savage Island duet is teeming with steamy romance, palpable tension, spine chilling suspense, adrenaline pumping drama and intrigue, and RAW, UNBRIDLED sensual interludes! While not necessarily dark in my opinion, it was chock full of adrenaline pumping twists and turns and I was totally entertained from start to finish!

EEEP! Cy is an unapologetic alpha male TO THE MAX. Big and brutish, with a heavy hand yet a ferociously protective and gentle side too, he will make you quiver and swoon aplenty! And Harper brings out his possessive, fiercely doting nature. He not only wants to dominate, punish and spank her to tears, but with all the strange, inexplicable things transpiring on the island, he will not hesitate to lay down his life to shelter this fragile creature.

As for Harper, she’s a wonderfully spunky heroine and certainly no helpless female! She’s a bit of a control freak who has worked her entire life defending the plight of repressed women yet in an ironic twist of fate she finds herself being rescued and then bossed around and kind of manhandled by this barbaric “ogre.” There is just something about this SAVAGE DOM that awakens her submissive side and has her secretly craving his domination. And as time goes on, all consuming feelings spark between them as she finds a perverse pleasure in being subjected to Cy’s stern consequences when she pushes his buttons by daring to defy him.

These two are clearly polar opposites in every way but circumstances have drawn them together and their red hot attraction cannot be contained! And as the story unfolds, an unbreakable bond is forged between these two unlikely allies who are forced to rely on each other for their very survival. Ms. Henry does a spectacular job with the stranded island plotline that has these protagonists falling in love amid unspeakable odds as they stave off starvation and try to solve the shadowy mystery of how they ended up on the island ...and why. As their sexual tension reaches a fever pitch so does the danger and subterfuge, and I was truly on pins and needles throughout trying to figure out what the heck was going on. Oh and it ends on a CLIFFY so make sure you dive into SAVAGE LOVE right away!

THE NARRATION:
Read to us by one of my favorite male narrators, D.C. Cole, he truly breathes life into this mind-bending survival romance! His deep, growly voice and commanding inflections embodied Cy’s macho alpha male, take no prisoners persona to a T. He was feral and predatory yet also sweet and nurturing, and he did a wonderful job seguing into the female role of Harper too! I could truly listen to Mr. Cole narrate the phone book and would be transfixed! His magnetic performances never fail to make me tingle from head to toe. Bottom line? He did an incredible job with this first installment and I can’t wait for him to sweep me off my feet again in book two.

Great story! It really makes you think and wonder WHAT IS GOING ON?? I can’t wait to see what happens in the next one!

I found this book a psychological thriller, full of mystery, intrigue, and explosive sex. The narrator did an outstanding job of conveying the emotions of these characters.