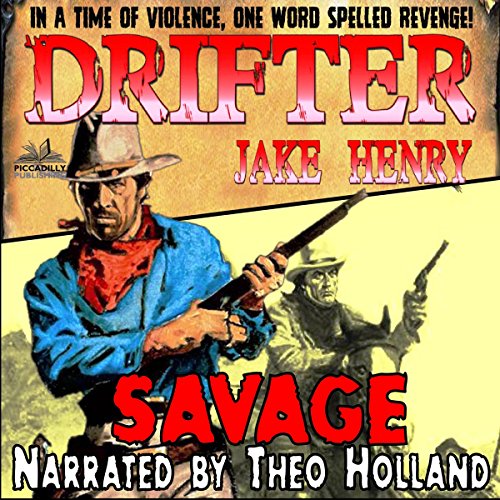 By: Jake Henry
Narrated by: Theo Holland
Try for £0.00

In 1864, Captain Jeff Savage was tasked to find Carver's Raiders, a ruthless bunch of killers who blasted a bloody path through the Shenandoah Valley. The mission was a failure and Carver escaped with a handful of men.

Two years later John Carver has raised his head once more when he and his gang of killers robbed a bank in Summerton, Texas, and a bloodbath ensued. During the violent exchange, a young woman is taken captive - Savage's wife, Amy.

When Savage discovered her ravaged body, it set a bloody chain of events in motion.

Eight outlaws escaped the battle in Summerton, and now, armed with the names of those eight, Savage was going to finish what he started. He was going to track each man down and kill him...slowly.

The only question was - would Savage live long enough to finish what he'd started?

What listeners say about Savage

This was a great story with a very believable yet interesting plot. This reminds me a lot of the old classic westerns. This book is very good. I also enjoyed the fact that it ended at the right time. It was not too short and was not too long. I will be looking to listen to more from the author/narrator.

This is a good western. Savage is on a mission. There is plenty of action and adventure. Theo Holland did an excellent job narraiting this book. If my review was any help will you please click the helpful link. Thank you

Jake Henry was new to me, but I’ve listened to Theo Holland, and he did not disappoint. Great story and performance!

This book is well written and I really enjoyed it. Savage, after finally arriving home from war, just wanted to see his wife. When he was informed she was taken and he found her body there was no stopping him from finding the men who did it and exacting his own justice. He didn't care if they were armed or not....they were going down!!! "You killed my wife".....BLAM!!!!....dead. No mercy at all. I also thought that Theo Holland did a wonderful job narrating. He used his regular voice for the Savage character. He has a masculine.....manly man, tough guy voice that just fit the character perfectly!!! It was just the perfect combo of good story writing, great characters, and talented narrating that makes this book great.

Talk about a reckoning!

Would you consider the audio edition of Savage to be better than the print version?

I didn't read the print version, but very much enjoyed the andio version.

What other book might you compare Savage to and why?

"Patch, The Story of Handsome Henry"; both deal with revenge for wrongs done.

What does Theo Holland bring to the story that you wouldn’t experience if you just read the book?