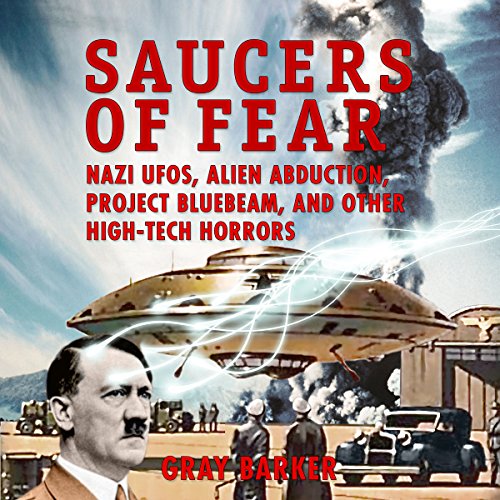 New Saucerian Press proudly presents Saucers of Fear: Nazi UFOs, Alien Abduction, Project Bluebeam, and Other High-Tech Horrors - one of the last books ever written by the iconic ufologist, publisher, and best-selling author Gray Barker, whose writing informed the plotlines of shows like Star Trek, Futurama, The X-Files, Twin Peaks, The Outer Limits, and The Twilight Zone.

Shuttling between his Manhattan publishing office and his secluded cabin deep in the hills of his home state of West Virginia, the prolific Barker single-handedly kept public interest focused on UFOs during its leanest years and introduced many themes still discussed and investigated by today’s paranormal and conspiracy researchers: the Roswell UFO crash, men in black, ancient aliens, Nazi UFOs, the Philadelphia Experiment, the Flatwoods monster, Mothman, MJ-12, secret underground bases, little green men, and the Maury Island Incident.

Saucers of Fear and its sister books, Serpents of Fire, Saucers of Fire, Time-Traveling Through Swamp Gas, Chasing the Flying Saucers, Bigfoot Shootout, The Ghost of the Philadelphia Experiment Returns, and When Men in Black Attack, were assembled by Barker shortly before his death using material culled from deteriorating copies of his notoriously speculative newsletters and gossipy syndicated column - for years the most widely read national column on UFOs, Forteana, and “weird science”.

This unique edition of Saucers of Fear features a special introduction by Barker, as well as reports from his field investigators, who - in true newsletter style - shed urgent, much-needed light on riddles such as: UFO abductions, missing time, man-made saucers, “alien” healing, antigravity, the MIB, underground bases and tunnels, black helicopters, brainwashing, and remote surveillance.

What listeners say about Saucers of Fear

Not ready for prime time!!

Performance is a joke, correcting himself 2 to 3 times with a clicker when reading a sentence incorrectly, obviously the editing was never finished before the release of this audiobook. Topics are scattered and all over the place, not worth time nor money!