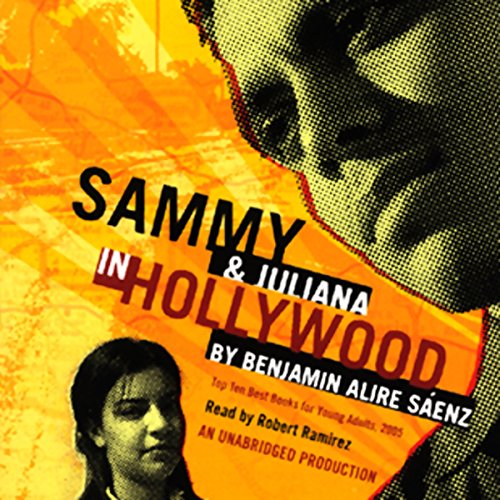 Sammy and Juliana in Hollywood

Sammy and Juliana in Hollywood

By: Benjamin A. Sáenz
Narrated by: Robert Ramirez

The "Hollywood" where Sammy Santos and Juliana Rios live is not the West Coast one, the one with all the glitz and glitter. This Hollywood is a tough barrio at the edge of a small town in southern New Mexico. Sammy and his friends, members of the 1969 high school graduating class, face a world of racism, dress codes, war in Vietnam, and barrio violence.

In the summer before his senior year begins, Sammy falls in love with Juliana, a girl whose tough veneer disguises a world of hurt. By summer's end, Juliana is dead. Sammy grieves; the memory of Juliana becomes his guide through the difficult year ahead. Sammy is a smart kid, but he's angry. He's angry about Juliana's death, he's angry about the poverty his father and his sister must endure, he's angry at his high school and its thinly disguised gringo racism, and he's angry he might not be able to go to college.

Benjamin Alire Saenz, evoking the bittersweet ambience found in such novels as McMurtry's The Last Picture Show, captures the essence of what it meant to grow up Chicano in small-town America in the late 1960s.

"The barrio setting is as palpable as the wings that beat against Sammy's insides when danger lurks." (Booklist)
"This is a powerful and authentic look at a community's aspirations and the tragic losses that result from shattered dreams." (School Library Journal)

I love this book read it a long time ago and having the audiobook was just amazing. It made me cry and feel how Sammy was feeling. Fucking A Sammy.

One of the best books I have ever read or listened to in my life. So good. I love all of his books!

This book is amazingly heartbreaking and powerful. I'm not one who usually gets teary eyed over anything, but the performance Robert Ramirez gave is truly something beautiful as is the writing and composition. 5*****