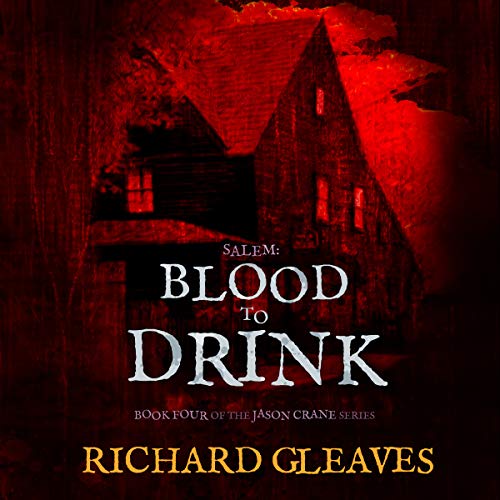 Jason Crane thought his life was back to normal. The Headless Horseman had been defeated, his guardian, Hadewych Van Brunt, was presumed dead, and he had finally inherited the Pyncheon Legacy, worth more than $100 million. But there's more than just one murderous and vengeful ghost in the world, and the Pyncheon family has its own dark past.

Now, Jason must learn the origins of his fortune, the reasons for its strange conditions, and the deadly consequences of breaking them.

A Halloween epic of witches and curses, Wiccans and satanists, friendship, love, and fear, set in the modern Salem with fidelity to every street, rock, and haunted place.

What listeners say about Salem: Blood to Drink

Another Brilliant Jason Crane book brought to life by the narrator Eric Michael Summerer, not only can he do various voices (male & female) he creates atmosphere as well. This is the fourth book in the series and although it is a long book (20hrs 44mns) my only regret was that it finished, I could have listened to another 20+ hours. Poor Jason again gets into a life threatening situation, but he has his friends, Joey, Kate, Zef and Valerie to help him out when a Salam witches coven puts a curse on him. It's a fight against time to get rid of the spirit who will carry out the curse and take Jason's life.

The narrator was fantastic! Got into every character and gave them life! Story was good but I felt like I should have listen to the sleepy hollow books first.

This is probably the best in the Jason Crane series. A more mature writing from the talented Mr. Gleaves, it leaves one with an urgency to finish the book, and for the next book in the series to appear. The tempo’s in each of the action sequences, which are plentiful, seem to transition more smoothly from scene to scene. Even though there is a great deal of knowledge of Salem, its building and its lore passed down through the book, the meter is at a engrossing pace and less of the metronome-like pounding one would find in his earlier offerings in this series, which are reminiscent of Edgar Allen Poe’s, “The Raven”.
I cannot say that I like the twists and turns in the relationship between My Pal ‘Joey’ and his Zev but it makes me need the next offering from Mr. Gleaves to be more urgent. Simply... I cannot wait for the next installment!
My congratulations on this more successful outing by such a talented writer.

LOVE and cant wait for the next one

The story just keeps getting better! Brilliant worknthat ties things in turbpast books to this one in surprising twists and a tale that kept me entertained all the way through! Why is this not a show/movie yet? I love the growth in these characters and much of the history incorporated has me appreciating the author's research!

I’m very happy I gave this book some time, especially since it’s the 4th in a series. The first 3 were good and this one is written with the same captivating quality as the previous.

The story was long and winding, but not the tedious or boring kind of winding. I wasn’t sure if much would make sense as new events happened and went on, but they did. Every thread put down by this author came together like a tapestry. Things came together well enough that the story felt complete and there is still enough to keep the story rolling into a sequel.

A must read book! Edge of your seat thriller!

Love the book! Might even be better then the last one but that's a very hard decision they are so so good I can't wait till the next! The characters are so detailed and not to the point of boredom. The we he rights just brings your imagination to full speed. A must read for anyone who is a fan of thriller.

Witches! The series just gets better!

I like that the characters are like old friends to me now, but with plenty still to discover about their values and personalities. The plotting, as usual is tight and purposeful, even as Gleaves expands a wonderful mythos in ever richer, creepier dimensions. And now, someday, I will HAVE to put Salem on my list of must-sees during the USA road trip. There is page-turning history behind the story. Talented reader Eric Michael Summerer is first-rate as always. His reading of the Jason stories is especially good, informative and moving, a campfire storyteller rather than a cold studio narration. He cares about these charmed people. And so will you.

I love this series! The author and narrator are excellent. I really enjoyed this book in particular because of the setting. I was lucky enough to visit Salem once and now I would love to go back. Please keep them coming🖤

I first discovered the Jason Crane series via Audible and I am so very thankful I did! Richard Gleaves does such an amazing job of taking a story we all grew up hearing and making it real! Being a history buff myself I appreciate all the research he obviously did to keep the history surrounding the original story accurate and building on it to create a very believable magical world.
He struck gold again in Jason’s new setting of Salem.
I was on the edge of my seat throughout the story in anticipation of what was going to happen next.
The narrator is definitely one of the best that I’ve heard.