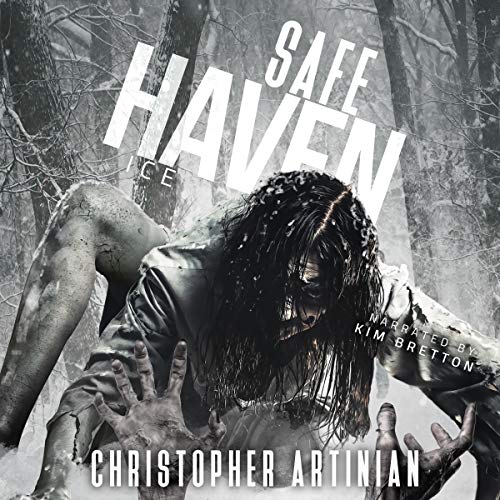 They thought their biggest battle had been fought - but the war had not even begun. Months after the defeat of a vicious army that threatened their very existence, a new enemy has come to town.

For Mike and his family, it’s a race against time. With death lurking around every corner, their only hope is to enter a zombie infested city to find the one thing that might save them. They have fought for all they have, but is this one battle too many?

Can they fight their fate one more time? Can they bring back hope for their people? Can they halt the fall of Safe Haven?
This will be their longest day; will it be their last?

The countdown has begun....

Another brilliant chapter in the Safe Haven story. Excitement all the way. Brilliant narration, even though I have already read it, enjoyed it just as much. Its great to catch up with the story before the next instalment comes out.

Just when I think Christopher Artinian can't get any better, he knocks me on my rear!! I think this is my favorite out of the series so far. The Safe Haven group has fought RAM's, bandits and other survivors, Now they have to fight something that you probably wouldn't think twice about before the end of civilization. Thank goodness the survivors have Mike and his family to try and come to the rescue again. The story is exciting and fast-paced. I also want to give special acknowledgement to the narrator, Kim Bretton. She does a great job of using separate voices for the characters which makes it easy to follow the story.

Just when I thought this series could not get any better, the next audiobook is released. We finally got the crossover between the two series Safe Haven and The End of Everything. Wren shows up to save the day! Wren is from the series The End of Everything! I am enjoying the writing style of this author. Each audiobook continues on with a fast paced storyline and non stop action ride. I like how the audiobook finishes out the mini story of that book. The narrator does a good job bringing the story and characters to life. I can not stress enough that you need to be listening or reading this author.
I can’t wait to see what is next for my favorite characters.

Without giving spoilers... All I can say is so many feelings raged through me in "Safe Haven: Ice.'
At many many times I screamed at the events happening to my beloved characters , luckily I was alone and in my jeep at the time. other times brought me to tears of joy sadness , anger, and relief.
Kim Bretton has done another marvelous job of narrating Mr. Artinian marvelous story. I await anxiously for the next catastrophe in Safe Haven!

This book kept me on the edge of my seat, each book gets better and better way to go Christopher Artinian .Now waiting on next book.

This book had me on edge the entire time. Action packed it putting it mildly. You can not go wrong with this author what ever he touches turns to gold!

This series is the one that started my present love of the Zompoc genre. Christopher Artinian is an excellent author and his books are some of the best that I have read. You know that when you start to read one of his books, you are in for a thrill ride of no comparison.

Book 4 picks up shortly after the end of Book 3, with our intrepid hero, Mike, and his family living as a community in Safe Haven. However, just when you think that things have settled down and gotten back to normal, you find out that (of course) that is not true. Mike and Emma's younger sister, Sammy, is fighting a losing battle with an especially nasty flu. Mike's lover, Lucy, who is also a physician, tells Mike that chances are not good for Sammy if she does not get lifesaving antibiotics. So, Mike makes the decision to go in search of the drugs she needs.

Along the way to find proper medication, the worst blizzard in Scotland's history hits and Mike and Emma are caught in the middle of it. With the roads impassable and the RAMs attacking in spite of the frigid temperatures, it is unclear if they will be able to find the meds and return to Safe Haven in time to save Sammy.

This book is full of action, with our hero killing the RAMs at every turn. As Alex told Mike, "Blood makes you relatives; love makes you family." Mike is determined to save his family at all costs and nothing will stop him. This book also meshes Mr. Artinian's two series together when Mike is saved by Wren from the End of Everything series.

After reading the books in this series, I have come to feel like I know the characters and find myself reading faster and faster in order to reach the conclusion. At the same time, I try to slow down in order to savor every detail. I enjoyed the comic relief provided by the two librarians, David and Richard. What great fun it was listening to them bicker and moan while under zombie attack!

The narrator, Kim Bretton, does a wonderful job and really adds a lot to this series. She brings the characters to life and moves the story along at the perfect pace. I can't say enough about the combination of the author and the narrator; it is truly a work of art.

I was given the chance to listen to the audiobook version of this book by the author and chose to review it.

I have to start this out by mentioning I have read this book prior to listening to it and I really enjoyed both methods, it was the listening to the novel that brought me to tears at the reunion of the Grandfather and granddaughter. I highly recommend this book in either format!