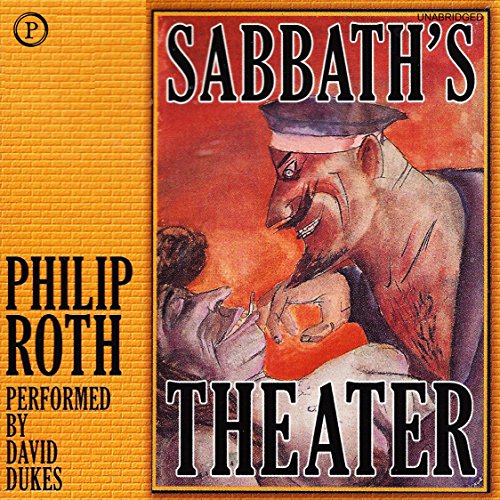 By: Philip Roth
Narrated by: David Dukes
Try for £0.00

Once a scandalously inventive puppeteer, Mickey Sabbath at 64 is an aging, raging powerhouse, defiantly antagonistic and exceedingly libidinous. But after the death of his longtime mistress, Sabbath embarks on a turbulent journey into his past. Haunted by the ghosts of all the people who loved and hated him the most, Sabbath contrives a succession of farcical disasters that take him to the brink of madness and extinction. Acclaimed author Philip Roth is at the very peak of his creative powers in this bold and hilarious novel, a comic creation of epic proportions.
©1995 by Philip Roth (P)1995 by Dove Audio, Inc.
Biographical Fiction Literary Fiction Psychological
Show More Show Less

"This splendidly wicked book . . . is among the most remarkable novels in recent years. . . . The energy of the book is amazing.... Roth is hilariously serious about life and death." ( The New York Review of Books)
"Roth's extraordinary new novel is an astonishment and a scourge, and one of the strangest achievements of fictional prose that I have ever read. . . . It is very exquisite." ( New Republic)

What listeners say about Sabbath's Theater

shame about the quality

superb story and really well read but the audio quality was appalling. Maybe it was recorded on wax disks in in 1920s but it could sure.do with digital tinkering.

Appalling quality - do not buy

An uncharacteristic example of corner-cutting by Audible. This is clearly an old recording, made on a home tape machine and badly transferred to digital sometime in the ensuing years. It is inaudible in places,
Excellent book by the way - this bad review is purely for the recording quality.

Another brilliant fiction from Philip Roth but unfortunately spoiled by poor sound quality which made the listening experience poor.

the quality of the recording is abysmal, please remaster, it's almost unlistenable. It's worth it, but please, there's no need for this terrible quality.

Theatre of the absurd

A fine and detailed account of the sad and tawdry decent of Micky Sabbath’s life, as it hurtles into the comical chaos of his making. Adulterous throughout his previous relationships and marriages, the ex-puppeteer and sailor reflects on his mistakes and the missed opportunities in his 65 year life. The novel at times languishes in Sabbath’s sexual fantasies and libidinous fetishes. A rouge, who over the years, has lost his family, his faith and his purpose, Roth tenderly writes about Micky Sabbath’s deep trauma over the death of his only brother, a pilot during the second world war, which illuminates the book in the closing chapters. Stick with this novel, as some of the prose is really rewarding, if a little bit on the over cooked side. The audio quality is poor on this title, which accounts for the three stars for the performance.

A great book by a great writer

Those with fragile sensibilities should look elsewhere, but make no mistake: this is Roth's masterpiece. Exhilarating, challenging, lyrical. Wonderfully performed as well.

Philip Roth is a genius.. This is one of his great works... COMPLETELY RUINED by terrible recording quality.

Really bad audio quality with this one. Great story though hard to get through. Yep

Modern Masterpiece by a Spectacular Writer

First, I am a fan of Roth, have read a number of his books and look forward to reading more. Roth was denied the Nobel again in 2014. While reading/listening to this book I felt I better understood why he will likely never win. Nobel's will provides that the prize be given for outstanding work in "an ideal direction". Brilliant as Roth is, there is nothing "ideal" about his work in general or about Sabbath's Theatre in particular. Roth is anti ideal. The antithesis of idealism. He will not uplift your spirit or get you to feel better about what it is to be human. His gaze is unflinchingly honest and his eloquence unsurpassed. Sabbath's Theatre is a high water mark of a great writer in full flight. It is dark. It is challenging. It is graphically sexual (many will find it pornographic). It is depressing. It is also laugh out loud, set the book down, hilarious. It is quite a strong stew. What is Sabbath's Theatre about? It is about loss, how integral to life loss is, and the spiritual consequences of loss. David Dukes narration is pitch perfect.

You’ll get used to it

The narrator is top notch and the book is without a doubt worth putting up with the poor audio quality. I’m very picky just like you, but I got used to it and so will you.

Some of Roth's best writing, but almost impossible to get through because of Mickey Sabbath's determination to live life as frivolously and libidinously as humanly possible. In fact,the sheer inventiveness of Sabbath's (and Roth's) debauchery is almost superhuman or perhaps inhuman, as if he were the embodiment of a force of nature, a Pan or a Puck. Oddly, I found the book extremely depressing when reading to myself and hilarious when I read portions out loud to a friend. Overall, I'm glad I read it, but getting inside the head of Mickey Sabbath was an uncomfortable experience.

The sound quality is too bad! It couldn't really enjoy the story due to the bad quality.


Fair warning: Swaths of this 1995 National Book Award winner pulsate with the prurient, the pornographic ponderings of Philip Roth, who vaunts his venery as a sextagenarian, plunging into the piercing tale of Mickey Sabbath, a 64-year-old primal puppeteer (-retired) with a penchant for prostitutes and loose women, bawdy bopping, and, generally, close encounters of the lewd kind. Sabbath delights in being labeled a "dirty old man," and the book flashes between legion acts of unfaithful, intimate intercourse and episodes of phallic farce, such as Sabbath stealing dirty drawers of a friend's college age daughter for self-gratis in the friend's tub.

I mostly agree with the assessment of Edward Porter, the National Book Award's blogger for this novel, who described the novel, in part, as "a celebration of the inexhaustible human need for carnality--as creative act, as vindication of individuality, as rebellion against failed marriage and other bad choices, and, most importantly, as F-you to the ever-present specter of death."

For much of the novel, Sabbath contemplates suicide while unconsolably grieving for Drenka, his lustful recently-deceased, long-term partner in unfaithful sexual hi-jinks. Sabbath repeatedly flashes back to their escapades. In these, Roth shows his mastery of lecherous linguistics:

"Lately, when Sabbath suckled at Drenka's uberous breasts--uberous, the root of exuberant, which is itself ex plus uberare, to be fruitful, to overflow like Juno lying prone in Tintoretto's painting where the Milky Way is coming out of her tit--suckled with an unrelenting frenzy that caused Drenka to roll her head back ecstatically back and to groan (as Juno herself may once have groaned), 'I feel it deep down in my c***,' he was pierced with the sharpest of longings for his late little mother."

The audio was awful.

I tried listening to this a few timers and even considered returning it because the audio quality is notably subpar. It feels like a copy of a cassette tape or something coming in on AM radio when you've driven a bit too far from home. After a while the problem faded for me and was no longer distracting so I was free to enjoy the book (terrific!) and the narration (well performed) I suppose you should know what you're getting into. It's a character portrait of a misanthropic dirty old man as he engages of all manor of perversity. It's fairly funny and occasionally very sweet in it's own way, It's very lively and keenly observed.

At the beginning I had my doubts but as Sabbath's character developed the book was more and more compelling. Excellant narration captures a history and culture that seems even farther away now than it did when the book was written.