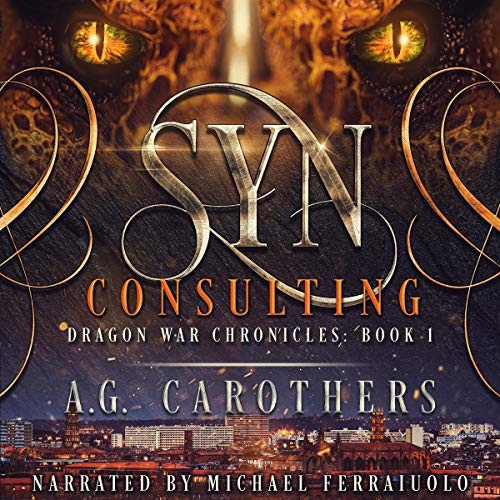 Continue to hide or help save the very kin she's hidden from?

Welcome to SYN Consulting, the top business strategy consulting firm in Europe, home to a motley crew whose leader has a life changing secret. CEO, Danica Lestrange, is the first female dragon born in the last 800 years. Hidden from the rest of her kin and raised in the human world, she built a life that she would defend until her death.

A devious plan is unearthed while working on a new business deal that could plunge the dragons into another war with the humans. The humans may have forgotten the last dragon-human war, but the dragons have not. Will the war reveal this hidden world to the humans, or will the clans come together to defeat their enemies and maintain their anonymity?

Danica must gather her allies and help the very dragons she's hidden from her whole life. She can only hope that she'll be strong enough to protect her chosen family.

This is the first audiobook in a new series about dragons who want nothing more than to live in peace, but refuse to be subjugated. In war there's also love, and love is blind. Love doesn't care about gender, race, species (in this case), or sexuality.

Attention: This book contains explicit sexual content between consenting adults. The sexual scenes are MM, MF, and MMF. There are romantic relationships depicted that are MM. There is also a high level of explicit language, snark, kink, and possibly bad puns and fart jokes.

This audiobook does end in a cliffhanger.

Dragon War Chronicles is a continuous series. It is best to listen in order:

What listeners say about SYN Consulting

oh my! what a cliffhanger!!

A thrilling and detailed series opener, saturated in culture, secrets and mystery. I love all the covert elements and the unique pack created. I like the unique collection of characters. I feel each one has more of a story to tell but the taste has me intrigued. I'd say this has more MF focused relationships but they are all intertwined in their own way. I feel the sense of pack and pack type love over romantic connections but I'm intrigued by these characters and what connections will appear in the next book.
I need the next book now!
as always Michael is fantastic and I could have sworn there was more than 1 narrator with all the unique voices Michael has mastered.
The is the start of a thrilling adventure made even better by dragons!!!

I’ve learned to expect great things from A.G. Carothers and Syn Consulting, the first episode of their Dragon War Chronicles, has just raised the bar. Carothers lays the foundation for this thoroughly captivating series with interesting characters, non-stop action, and a delightful dose of sophisticated dialogue.

As the CEO of Syn Consulting, Danica Lestrange isn’t your average gal. Drop dead gorgeous, self-confident, and thoroughly committed to enjoying her sexuality, Danica is also a rare female dragon. Her fate is sealed, her mate chosen by the gods, and Danica knows one day she must breed to ensure the future of her race. But this powerful woman isn’t about to lie down and let anyone walk all over her!

The rest of the cast includes an interesting mix of shifters, called SLIPS in this story, who make up Danica’s support network. Employees, lovers, friends... these men are Danica’s family and I love how A.G. Carothers advances the story by focusing on the characters’ complex relationships.

I felt a little sorry for Kollin Olsen, the dragon who is Danica’s fated mate. Kollin truly needs SYN Consulting’s help and Danica flirts and teases him during every video conference. Proud and (in my opinion) a bit stuffy, Kollin is a male dragon from a powerful clan who isn't used to being toyed with. The tension builds delightfully between them, and when Kollin discovers Danica is actually a dragon… Syn Consulting ends in a wicked cliffhanger!

It’s going to be mighty hard to wait for the next episode, and tempting as it is to purchase the book right now, I will firmly resist. With the audio version performed by the incredibly talented Michael Ferraiuolo, I know it will be worth the wait.

As creative, sensual, and exciting as this first episode has been, the following books in the Dragon War Chronicles promise great things. I can’t wait to find out what happens next, and with the next novel’s title, Secrets Revealed, I can only imagine!

This was a fantastic story line. Danica is anomaly, first female dragon born in over 800 years. She surrounds herself with different species of shifters. She's their Alpha. The narration was phenomenal!!! Michael Ferraiuolo did an amazing job differentiating all the different cast of characters and there was a lot of them. Fantastic story!!

You won't want to push pause

SYN Consulting is heart-racing in more than one way. It's absolutely brilliant and I lost myself listening to the audiobook. Dragons have much longer memories than humans, and everything is on the line. The world and characters are well-built, and the tension, sexual and otherwise will make you never want to hit pause! Highly recommend with great voice acting and even better storyline.

Listening to an audiobook after you've read the ebook or print book can sometimes be a disappointment. Much like watching a movie after having read the book. There was none of that with Carothers', "Syn Consulting."

When I read the first book of this unique series last year I loved everything about it from the Lore and shifter history the story was built around, to the fact that the characters were global and encompassed so many cultures and shifters.
Michael Ferraiuolo narrates this wonder-filled adventure. If you have ever heard his work, you know you will be in for a truly delightful romp. However, if you are new to the sinfully smokey narrations of Mr. Ferraiuolo, this story is the perfect starting point.

You will find action, drama, comedy, and of course romance among the slips. Be aware however, there are M/F and M/M scenes tantalize and titillate the senses.

I received a complimentary copy of this Audiobook in exchange for my review. 💜🌈💙

SYN Consulting is only the second book I've read by A.G. Carothers and boy did I love this one. The story is great but the audio performance by Michael Ferraiuolo was simply outstanding. I've listened to several of his audio performances and loved them all, but I think he really outdid himself with this one. There are so many different characters and accents in this story but it wasn't difficult at all to keep track of who was speaking because he found the perfect voice for each of them.

If you read the blurb then you know that this book ends on a cliffhanger. I am not a fan of books with cliffhangers but I knew going in that there would be one. (I really hate it when a cliffhanger comes as a surprise.) This story is worth the agony of waiting for the next in the series to be available as an audiobook. If I decide that I can't wait then I can read the e-books, four of which are available now. From what I could tell on Amazon, it looks like there will be at least two more books for a total of six.

A lot of this book is setting up relationships and scenarios for things that I am sure are coming in the series. There are multiple sexual relationships between consenting adults – MM, MF and MMF. There are also many different shifters – bear, wolf, fox, etc. – and of course, dragons. This is the first dragon shifter book I've read and I maybe hooked now. 😊

I found the entire story captivating and I listened to the 6+ hour audiobook straight through in one afternoon/evening. I know that audiobooks are expensive for authors to produce but I sincerely hope that Michael Ferraiuolo will be performing the remaining books in this series.

A copy of this audiobook was provided to me but my review was voluntary and not influenced by the author.

This is one of the best books I've listened to in a while. The action is in your face. The sex is off the charts HOT and the narroration is amazing as always with anything Michael does. I am definitely buying the rest of the series and will get the audio when they are out!!

OK, when is the next book in this series? Narration by Michaiel Ferraiuolo was great.

As Good as the Book itself!

I read the entire series and loved it. Now I get to listen to it and enjoy it all over again. AG is an incredible author. his stories are very entertaining and well written. Thank You AG! I'm a fan for life.

Omg one of the best