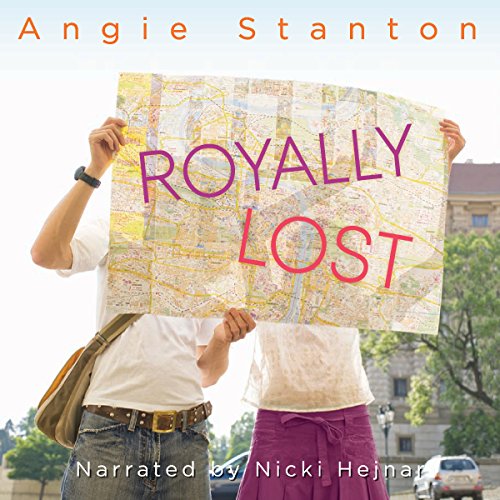 A girl with no direction and a prince on the run need more than a map to find their way.

Dragged on a family trip to Europe's ancient cities, Becca wants nothing more than to go home. Trapped with her emotionally distant father, overeager stepmother, and a brother who only wants to hook up with European girls, Becca is miserable. That is, until she meets Nikolai, a guy as mysterious as he is handsome. And she unknowingly finds herself with a runaway prince.

Nikolai has everything a guy could ask for - he's a crown prince, heir to the throne, and girls adore him. But the one thing he doesn't have... is freedom. After staging a revolt, he flees his kingdom and goes undercover on his own European tour.

When Nikolai and Becca meet, it's their differences that draw them together. Sparks fly as they share a whirlwind of adventures, all the while dodging his royal guard. But Becca's family vacation ends in a matter of days. Will Nikolai and Becca be forced to say good-bye when his destiny catches up to him, or will they change history forever?

What listeners say about Royally Lost

The story was predictable but still OK. I would have given it four stars but some of things the characters did or said annoyed me a lot. This is not really for me, however, others might love it more. The narrator did a great job in voicing the characters. If you can get past some of the characters annoying trait then you'll love this book.

Royally Lost by Angie Stanton was a cute, girl meets prince but doesn't know he's a prince story. It's been done before, most notable in the Prince and I movie, but this was still a cute story, nonetheless. Becca did get a tad bit annoying at times with all of her complaining, but overall, I would definitely recommend this book to the tween/teen set. It's an innocent, fun, coming of age romance. Nicci Hejnar did a good job with the narration and her voice fit in perfectly with the tone of the story and the age of the main characters. I'd listen to more of her performances in the future. I was voluntarily provided this free review copy audiobook by the author, narrator, or publisher for an honest review. Did you find this review helpful? If so, would you please take a moment and select the 'helpful' button below? Thanks so much!

Super Fun Romance & Adventure in One

I really enjoyed this one it had romance and adventure. It was pretty clean and very entertaining. It was a bit predictable but with the writing style and narration it really didn't hurt the book at all. I will listen to this one again as I enjoyed it so much and often need a good easy listen while I'm getting projects done. I was given this free review copy audiobook at my request and have voluntarily left this review.

A beautifully well written and narrated romance. In this read, we meet Becca and Nick, both are suffering from being lost in the crowd that is their families. Neither is being seen or heard and then they both take measures to do things on their own where fate seems to bring them together. Everything is going well until family obligations and demands separate them earlier than wanted. Will fate work in their favor again and bring them back together or will their summer fling away from their families be all they are destine to have. I really loved the storyline and the characters and chemistry - I especially loved Becca's brother and his fleeting role and would love to have a story about him and his travels and escapades too but - we'll see. Narration was beautiful and the storyline flows well. You get the sense that even tho this story includes royalty it's plausible that the events could take place so I appreciate the authors realistic writing style. I have loved everything I've read / listened by Stanton so far and hope to continue to have the opportunity to listen to more! This book was given to me for free at my request and I provided this voluntary review.

Cute and Cheesy YA Romance

I was given this free review copy audiobook at my request and have voluntarily left this review. I liked almost everything about this book except the main character, Becca. She was way too "not like other girls" for my taste and spent a lot of time calling people shallow and superficial (which was deeply ironic seeing as she whined non-stop about a free European vacation because there was too much history and not enough McDonalds). In a lot of ways, Becca was the terrible stereotype of an American tourist, yet Nikolai seemed to find it endearing and quirky? I was really expecting this book to actually appreciate the beauty of the countries it featured, but Becca spent most of her time complaining about them. That aside, though, this book was a fun, easy read with a cute teen romance. I loved some of the antics and dramatics, and it reminded me a lot of the Lizzie McGuire movie, so bonus points for the nostalgia. If you want something thoughtful and realistic with detailed descriptions of European countries and culture, this is not for you. But, if you want a fun and kind of silly teen romance that makes you wish you were a teenager again, this is exactly it. Narration was fine, though some of the accents were a bit inconsistent. It didn't bother me much though because the most European thing about the book was Nikolai's name.

I loved this YA romance. It is a cute, sweet, and adventurous story with delightful, loveable characters. The story is fast-paced, with a pretty believable scenario of romantic rendezvous. It has a wonderful HEA ending. I thoroughly enjoyed this story and will definitely read more by this author. I listened to the audio version, and narrator, Nicki Hejnar, did a wonderful job bring the story and the characters to life. Quite enjoyable.

Great listen with fun characters and plenty of adventure. Great narrator as well! I received a review copy of this audiobook at my request and I have voluntarily left this review.

I really enjoyed this fun YA romance. I listened to this with my teenager on a road trip and we both really enjoyed it. Great narration! I was given this free review copy audio book at my request and have voluntarily left this review.

Would make a good movie

I had a lot of fun listening to this story, it's well written and a good balance between serious and light hearted. The connection between Becca and Nikolai is sweet and heart warming, I loved the way they kept finding each other, and the obvious care and love between them. I really liked the ending, but I'd also have loved to know how things looked for them a few years on. I found that I had to just let some things go in order to enjoy the book, Becca really annoyed me at times, all the complaining and hatred of history got annoying. The familial relationships are trying as well and their communication is awful. You need to accept the book for what it is if you want to enjoy it, fluffy and full of teen aged angst. The character voices are well done and the narration style was a good match for the tone of the novel. I received a free copy of this book from the author and/or narrator and/or publisher and I voluntarily wrote this honest review. If you found this review helpful would you please take a moment to click yes below.

Becca is on a European riverboat tour with her family; Nikolai has escaped from his Royal duties for a few days of freedom driving thru Europe. I liked the story except for the level of Ms Honor Roll’s disdain of the history she is seeing. I would have liked Becca better if she had a more balanced viewpoint. My favorite part was when Nikolai offers constructive budgetary suggestions for improvements necessary in his country. Cute becomes sexy when combined with brains. Ms Hejnar does a decent job of narration. She even handles the correct pronunciation of most of the European points of interest. I was given this free review copy audiobook at my request and have voluntarily left this review.