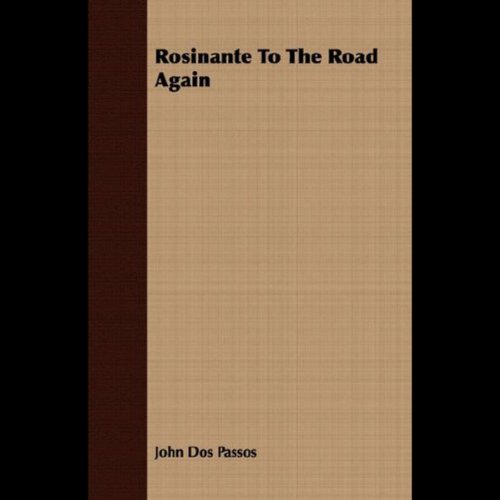 Rosinante to the Road Again

By: John dos Passos
Narrated by: David Crommett
Try for £0.00

The title of John Dos Passos' evocative early novel alludes to Don Quixote’s horse in that most celebrated of Spanish novels that follows the adventures of a wandering dreamer. One of the audiobook's protagonists, Telemachus, is named for the journeying son of the famous wanderer Odysseus. While drawing on classic odysseys, this novel is part buddy road trip and part essay. Two friends travel from Madrid to Toledo in post-World War I Spain, but Dos Passos also wanders off, musing on the Spanish country folk and turn-of-the-century writers. David Crommet performs the text as it is written: as a long evocative poem. It is a journey of gestures and a portrait of a people and a land, painted by a young author asserting his identity.

Making allusions to Don Quixote's wanderings on his trusty steed Rosinante, American novelist John Dos Passos creates a story of two travelers making their way by foot from Madrid to Toledo in post-World War I Spain. Along the way, they encounter simple, earthy folk on the trail and in taverns, thus providing a convenient backdrop for Dos Passos's observations on the tension between old agrarian ways and new industrial imperatives. Dos Passos interweaves the story with chapters about the finest Hispanic poets and novelists of the day. One of Dos Passos's earliest books, it delights the reader with the young writer's poetic use of the English language.
Public Domain (P)2009 Audible, Inc.
Classics
Show More Show Less

What listeners say about Rosinante to the Road Again

Giving homage to Cervantes by using Rosinante in the title bringing with it visions of Don Quixote's trusty steed on the path of discovery. Dos Passos examines the spirit of the people of Spain in the years after World War I in this work. The comparison of the all work attitude of the Americans versus the laid back Spaniard more concerned with enjoying life was center stage. My favorite quote from the work was "They fall in love sensually with ideas, with great ideas. They Re incapable of marrying a great and pure idea and breeding a family with it; they only flirt with ideas. They want them as mistresses, sometimes just for the night. "