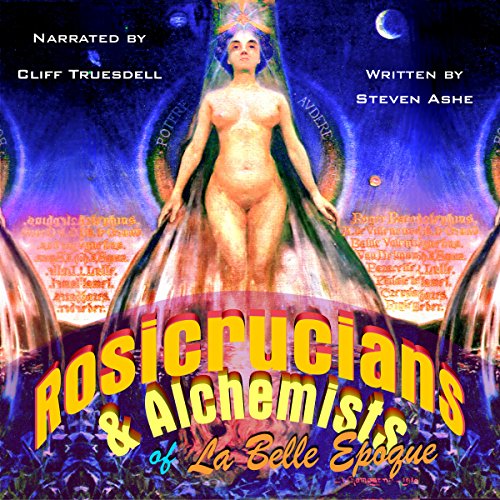 By: Steven Ashe
Narrated by: Cliff Truesdell
Try for £0.00

A fascinating insight into Rosicrucian and alchemic secret societies popular in France during La Belle Epoque, 1880-1914, and beyond. Beneath the esoteric and spiritual eccentricities detailed in this work lies a tradition of serious esoteric inquiry that occupied some of the greatest minds of the day. The real identity of Fulcanelli is investigated fully and revealed, as are the international roots of the Rosicrucian revivalists of this era. During this period, France was gripped by an anti-Freemasonic and anti-secret society wave of hysteria promoted by the Church and the immense popularity of Rosicrucianism and alchemy arose as a response to this. This is a story of immensely wealthy patrons of esoteric lore - some even able to afford the redesign of numerous chateaux in the style of tarot card iconography - and the influential writers and thinkers who defined the era.

What listeners say about Rosicrucians & Alchemists of La Belle Epoque

Short book, 90 minutes or about 150 short pages. Lots of very interesting information about this time period in France. A little bit too much about Aleister Crowley for my tastes. But overall a very enlightening book, especially the parts about Fulcanelli and his protege Eugene Cansiliet. This book claims that the manuscript for Fulcanelli’s “Mysteries of the Catherdrals” was a stolen manuscript and not meant to be published, much like the original Rosicrucian manifesto, “Fama Fraternitatis”. Some of the depictions of tantric sexual practice in this book are a little bit graphic, I’m not used to reading about such graphic details in books with “Rosicrucian” and “Alchemy” in the title, but these descriptions do help to give a general understanding of the different practices at this time and place. The lengthy description of different “schisms” within the various groups is also something not often found in books with similar titles, and perhaps somewhat unneeded. I would give this book 4.0 out of 5 stars for the reasons mentioned above. I purchased a paper copy for my library as well as this audible version. The narrator is especially good at pronouncing the endless list of French names in this book, and I find it quite helpful to have all these French names pronounced for me! The narration gets 5 out of 5 stars. And the Audible app gets 5 stars for making this somewhat rare book a part of their library of available titles!