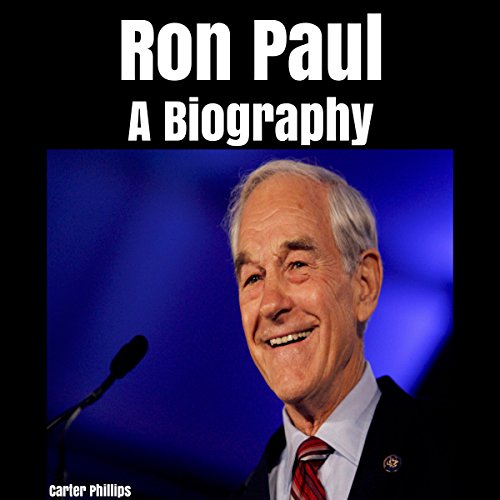 By: Carter Phillips
Narrated by: Daniel Treat
Try for £0.00

Ron Paul is an American author, physician, and former politician. He served as the US representative for Texas' 14th and 22nd congressional districts. He represented the 22nd congressional district from 1976 to 1977 and from 1979 to 1985, and then represented the 14th congressional district, which included Galveston, from 1997 to 2013. On three occasions, he sought the presidency of the United States: as the Libertarian Party nominee in 1988 and as a candidate in the Republican primaries of 2008 and 2012. Paul is a critic of the federal government's fiscal policies, especially the existence of the Federal Reserve and the tax policy, as well as the military-industrial complex and the War on Drugs. Paul has also been a vocal critic of mass surveillance policies such as the USA PATRIOT Act and the NSA surveillance programs. Paul was the first chairman of the conservative PAC Citizens for a Sound Economy and has been characterized as the "intellectual godfather" of the Tea Party movement.

A native of the Pittsburgh suburb of Green Tree, Pennsylvania, Paul is a graduate of Gettysburg College and the Duke University School of Medicine, where he earned his medical degree. He served as a flight surgeon in the US Air Force from 1963 to 1968. He worked as an obstetrician-gynecologist from the 1960s to the 1980s. He became the first Representative in history to serve concurrently with a son or daughter in the Senate when his son, Rand Paul, was elected to the US Senate from Kentucky in 2010.

What listeners say about Ron Paul

didn't really get anything new from this and feel kinda cheated knowing I payed for this when I might as well have googled this myself. nothing new or insightful

A concise primer on a great man

This is nice concise primer on the life of Dr. Ron Paul. I'm a big fan of Dr. Paul, but learned a lot about his early life from this audio book.

The highlights of Ron Paul's life were clearly presented by the narrator. An enjoyable audio book.

An insightful book, read by an engaging narrator

If you could sum up Ron Paul in three words, what would they be?

What was one of the most memorable moments of Ron Paul?

Deliberate pacing of the text

Not Backing Down: The Ron Paul Story

Great quick overview of the career of Ron Paul.

What other book might you compare Ron Paul to and why?

Can't think of one.

What does Daniel Treat bring to the story that you wouldn’t experience if you just read the book?

Good voice. Easy to listen to.

Cried when Paul lost the primary!

A Look at the Man Behind the Vision

Ron Paul is a man with a vision. That vision is to restore the American ideal of ordered liberty to our republic. This audio offers a short, but focused, introduction to the man behind that vision. I highly recommend it to all lovers of liberty.

Yes. It's interesting and pleasant to listen to. The reader, Dan Treat, does a very nice job, making the narrative clear and easy to follow. Ron Paul is also a very fascinating, and I am a fan.

What was one of the most memorable moments of Ron Paul?

When he advocated a return to the gold standard and voted against our intervention in Iraq.

He is clear, a good reader and has nice vocal inflection. He pauses at the right times (I assume, since I do not have the text to read.) Good job, Dan!

Keep up the good work!

This was a compelling book on a real life figure with nuggets of truth not otherwise known. An enjoyable audio book.

What other book might you compare Ron Paul to and why?

Carry a Big Stick: The uncommon heroism of Theodore Roosevelt - This also is the story of independent thinker from the 20th century.

Very clear reading with good diction. The book is an easy one to listen to.