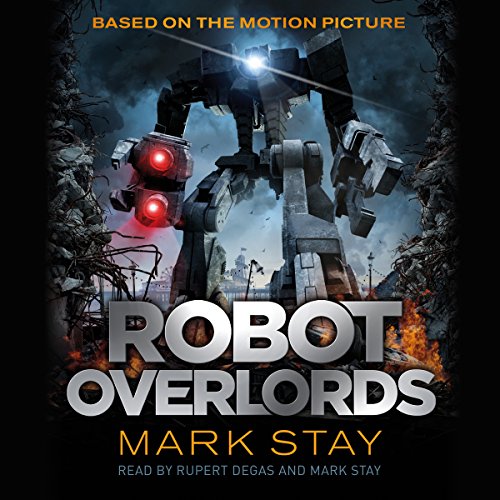 Narrated by Rupert Degas, and with behind-the-scenes diaries narrated by the author and screenwriter Mark Stay. This audiobook also features exclusive sound effects from the film and the short story The Mediator Prototype.

To find his father, one boy must defy an empire....

Three years ago Earth was conquered by a force of robots from a distant world. They have one rule: stay in your homes. Step outside and you get one warning before you're vaporised by a massive robot Sentry or a crawling Sniper or a flying Drone. That's if the vast Cube doesn't incinerate you first.

But Sean Flynn is convinced that his father - an RAF pilot who fought in the war - is still alive. And when he and his gang figure out a way to break the robots' curfew, they begin an adventure that will pit them against the might of the robot overlords.

This fast-paced, thrilling novelisation is based on the hit British film starring Sir Ben Kingsley (Iron Man 3), Gillian Anderson (The X-Files) and Callan McAuliffe (The Great Gatsby). A perfect companion to the movie, it expands on the story with additional action, characters, and a special peek behind the scenes.

What listeners say about Robot Overlords

Would you listen to Robot Overlords again? Why?

Yes, definitely. Edge of your seat action that won't get boring fast.

What other book might you compare Robot Overlords to, and why?

What about Mark Stay and Rupert Degas ’s performance did you like?

Good distinct character voices. Did the whiney teens believably without hamming them up too much.

Teens vs. Robots - who will survive?

never to old to enjoy

Would you listen to Robot Overlords again? Why?

Yes, now that I know what happens,. It might be more easy to listen to it.

The fact that the robots and Robin Smithe were defeated and that Sean and his parents were all reunited.

What does Mark Stay and Rupert Degas bring to the story that you wouldn’t experience if you had only read the book?

I did wonder during this book why anyone wants to listen to books where people are killed and why we all seem to love books with evil people in them. I don't particularly enjoy books like this but because the evil is defeated, I like it.

Beautifully performed. Written for advanced 8 year olds who can name every dinosaur and have made a few of them from blocks of wool in minecraft.

Where does Robot Overlords rank among all the audiobooks you’ve listened to so far?

What about Mark Stay and Rupert Degas ’s performance did you like?