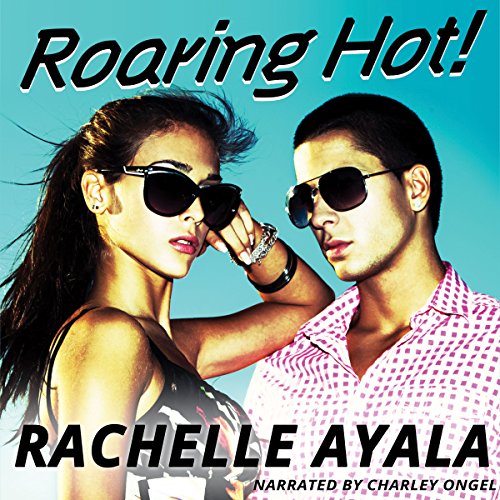 Motorcycle racer Teo Alexiou is challenged by his grandmother to come to her birthday party with a real girlfriend. He has plenty of party girls, and he fears getting roped into marriage so he hires an actress to play the part.

The last thing Amy Suzuki wants is to be a kept woman, but her student loans are piling up and acting gigs are nonexistent. She agrees to Teo’s proposal for one summer, limited to public displays of affection.

When Teo and Amy find themselves caught in love’s grip, their new desires war with their fears. Teo wants to renegotiate, but Amy insists she’s only with him because she is paid. She would never lose her heart to a man who uses money to buy affection.

Their game playing explodes when Teo is injured on the track. Teo needs Amy, but how can she be sure of her true feelings when she’s an actress who can portray any emotion on command? Was her role in the reality show skillful acting or true love?

What listeners say about Roaring Hot!

When a couple collides and the chemistry sizzles..

Honestly, this wasn't Rachelle Ayala's best book. In fact, initially I found both protagonists to be shallow and slightly irritating. I suppose it is in the nature of the industries that they have chose to work in, as well as their celebrity status, but they both appear self-serving. Teo particularly seems to be surrounded by sycophants and seems more willing to go to great lengths deceive others.

But once you get beyond the first part of the story, the initial impression is challenged. As the plot progresses, the characters develop more substance. It becomes easier to like them and to traverse the roller coaster-ish journey with them. The reader suddenly realised the characters have layers. Infact their layers have layers and the story becomes a whole lot more complicated and interesting.

I like how Rachelle Ayala usually includes a variety of Asian cultures in her stories. Her signature style is to also include God and/or mention church in the story. This book is no exception on both accounts.

That said, it is a feel-good, complicated story with complex characters and is rather fun to listen to.

This story is just as hot as all of Rachelle stories. This one is of a biker that thinks he’s hot .
Hero is Teo. Heroine is Amy.
Teo gets roped into hiring Amy has his fake girlfriend when Teo grandmother invites him to see her . The grandmothers purpose is to get him married.
After a while Teo starts to get feeling for Amy . Teo is a biker, who has money , he’s also a reckless biker .
The ending will break your heart about Teo, yes it ends on a cliffhanger.
Charley performance was great . She did all the characters great

Roaring Hot by Rachelle Ayala is such a un listen. I loved the meddling grandmother in this story! The premise of having a fake fiancé to get one's relatives to stop meddling is not original, but so enjoyable. The narrator, Charley Ongel did a great performance. Typically I hear her in duets, so this was refreshing to hear her wide range of character voices. I thought she nailed it. My review is not a synopsis of the book, but rather my opinion of it. I requested this review copy audiobook and have voluntarily written this review

Passion, chemistry, family, uncertainty, love and that devious Ronaldo Silver all are front and center in this release by Rachelle Ayala. With a desire to please his grandmother, Teo decides to find himself a fake girlfriend. With the help of his friend Ronaldo, they set up a realty show and find an actress to play his girlfriend. Amy is an aspiring actress and sees this opportunity as the big break for her career. Little do these two know what they are in for. I found it easy to fall for Teo, his character is wounded and seems to be pretty up front with who he is. Amy it took me a little while longer to warm up to, but as she warmed up, so did I. I enjoyed the supporting characters, happy to see Ronaldo from the Intercepted by Love series, always causing trouble. I also enjoyed Teo's grandmother and sister. They brought some unexpected personalities in that were fun. Ayala has once again brought a complex story and wove a beautiful love story around it. This book was a pleasure to listen to.

This is the first time I have heard Charley Ongel narrate a book by herself. Usually in a team with Tor Thom, this book is able to showcase her talents with both male and female voices. She gave a beautiful performance.

Teo needs a fake girlfriend to appease his grandmother’s wish that he find someone steady by her birthday party. Amy is a new actress looking for an acting job and auditions for a reality show, not realizing it is just a set up by Teo’s friend to find him a fake girlfriend. This a fun, enjoyable story with an interesting storyline. My heart went out to Teo and I really liked his character. Amy took a little longer to warm up to however when I started to understand her insecurities I could also sympathize with her and wanted her to find the love she deserved. I found myself rooting for both of them. Charley Ongel did a very nice job narrating. This book was given to me for free and I provided this unbiased review.

The ego has landed and it's about to be brought down to size.  Roaring Hot is a scorcher.  Ms. Ayala let's her inner comedian shine through with Amy "hot tamale" Suzuki and Tao the lovable but frustrating egomaniac.  She wants to follow her dream.  He wants his family off his back. The aspiring actress and the monied up racer are about to broker a deal with unexpected results. Charley Ongel was a great choice to bring this fire inducing duo to life.  She stayed true to the sassy spirit of the characters, but brought out more of the heart as well.

Teo needs a girlfriend to take to his Grans birthday after he finds out she may not have long to live. He is a relationship phobe and a playboy not believing in love.
Amy is an aspiring actress that also has relationship issues. She gets a chance to audition for a role in a reality show to win over a motorcycle racer. There are several little plots with the major one and as many curves and twits as on a racetrack.
As always Rachelle Ayala has come out with another great story. If you like really hot, sexy stories, rich men, playboys, twists and turns, a fun romance and great characters, this is for you
Charlie Ongle is a great Narrator. She brings all the characters to life without sounding silly doing a mans voice. I really liked the narration and didn't want to quit listening.

Smoking hot racer and the actress

Amy is an aspiring actress with a mound of student debt; Teo is a motorcycle racer who needs a reputation makeover...besides, his grandmother is dying and wishes for him to be in a serious relationship. The solution...hire Amy to be his pretend girlfriend! That, in itself, is a challenge, because while Amy is attracted to Teo, she has many insecurities that Teo's filming crew use to their advantage. Just as Amy is beginning to recognize her feelings for Teo, he is seriously injured in a crash. Will Teo recover from his injuries or is it the end of the fledgling relationship? I loved Teo's meddling, but well meaning, grandmother...I hope I'm that spunky at 80! Great HEA...always great narration.

I think this author is becoming one of my favorite

such a sweet full of sass story I loved this fun and sexy story this author is very fun and she writes very interesting characters I love every single book I heard from this author very much
I was given this free review copy audiobook at my request and have voluntarily left this review.

this is a great book that has just the right amount of steam. i hivhly recommend this book.

You won't want to stop listening!

What happens when you put a hot, rich motorcycle racer and a beautiful, fun and sassy actress together for the summer? You get one hot and steamy romance in the making. When Teo hires Amy to be his fake "real" girlfriend two people's lives collide together in the best way possible even if they don't realize it at first. Teo loves his grandma and wants to make her happy; Amy wants to make it big as an actress and needs a big "break" to launch her career. Desperate for money and the shot she needs to make it big she agrees to be Teo's girlfriend for the summer. This sets into motion a summer that will change both of them. Before they can be truly happy together they need to let go of all their insecurities and let the walls down. This is a funny, hot and steamy story that will grab and hold your attention from the beginning. I didn't want to stop listening. I couldn't wait to hear what would come next. I highly recommend this listen to anyone looking for their next fun and flirty story.

I was gifted a copy of this book at my request for my honest and unbiased review.

A fun and enjoyable story...

Teo loves his grandmother and would do anything to please her, and she seems to know this. So for her 80th birthday, she asks him to get a ‘real girlfriend’. Not sure if he would be able to open his heart and tear down the walls he has built, he asks a friend to help him find and hire the perfect fake girlfriend to present to his grandmother. Amy is an actress that is not finding enough work to support herself, and the last thing she wants is to move home and live the life her parents think would be a better life for her. So when she gets the offer to be Teo’s fake girlfriend for the summer, she takes the job. When the lines begin to blur, they both start to wonder if they are still acting or if there are feelings between them. The narrator was really good. This story was very enjoyable.

I loved the meddling grandmother in this story! The premise of having a fake fiancé to get one's relatives to stop meddling is not original, but so enjoyable. The narrator, Charley Ongel did a great performance. Typically I hear her in duets, so this was refreshing to hear her wide range of character voices. I thought she nailed it. My review is not a synopsis of the book, but rather my opinion of it. I requested this review copy audiobook and have voluntarily written this review.

When a reality show gets real

Teo, a billionaire playboy, needs to find a girlfriend to take to his grandmother's birthday party. What better way to find a "girlfriend" than to hire an actress for a "reality show"?

Amy is looking for her big break. A reality show could be just what she needs as a steppingstone to the big screen. Can this job turn into something more?

Rachelle Ayala spins another wonderful story with just the right amount of steam and emotion.