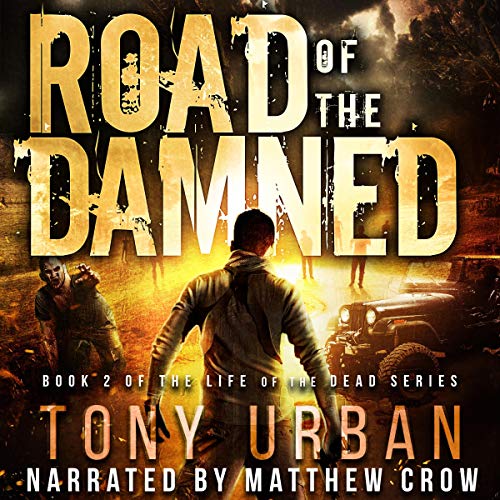 Road of the Damned

By: Tony Urban
Narrated by: Matthew Crow
Try for £0.00

Book 2 in the hit zombie series listeners have described as "Stephen King's The Stand meets The Walking Dead."

In the weeks after a virus decimated humanity and left fewer than 5,000 people alive in the US, a diverse group of survivors struggles to stay alive. Farmer Wim Wagner has abandoned the safety of his farm in hopes of finding Ramey, the mysterious girl who flitted in and out of his life in the midst of the outbreak. But Ramey is on the road searching for her father and trying to locate the mysterious X on a map that promises safety.

Meanwhile, survivors like Jorge and Bundy find themselves lost on the road, trying to locate other human beings and fighting off hordes of zombies. Some rescue missions end in success, but others in tragedy.

Teenager Mitch is trapped in a secret underground bunker along with his mother and thousands of the undead.

Mina has escaped the hospital after killing her father when he turned into a zombie.

Grady desperately attempts to protect his autistic son after the boy died and returned as one of the undead.

They're only a few of the men and women fighting survival in a world where the dead have returned to life and overtaken the country. Will they find each other on the road or are they destined to live and die alone?

What listeners say about Road of the Damned

at first it took me awhile to get use to the new narrator . brilliant story telling, kept me on my toes

A really good read, so gruesomely good it gave me shivers! I can't wait for the next book, and Matthew Crow's narration still makes my toes curl! I received this book in exchange for my honest review.

I received this book via a promo code and this is my voluntary review,

Second book in the series. Wyn was still on the road to find the beautiful girl who he saved near his farm. XXL Escaped Con Bundy is finding love with Mina and Zombie Josiah is still wandering around with his Bible thumper daddy. While I had issues with the character overload from book one. Our groups are meeting along the road, good people are getting killed and bad guys are doing what they do best, surviving the chaos. This was an excellent story and each of the characters fought sensibly but in the end, who survived was sometimes just a matter of luck.

None of these characters were too stupid to live and I will gladly be joining them for book 3.

But what the ever-living £*$% is that accent Sol has?

He's supposed to be from Birmingham (the one in England, though I don't know why Urban decided to transplant a Brummie to Murica, when you've got a perfectly serviceable Birmingham of your own in Alabama (and you're more likely to find a psychopath called Solomon in Alabama than England)) but Crow for reasons best known to himself has decided to characterise him with a Drunk Crocodile Dundee accent. THRAOW ANATHAWAN ON TH BAAAAAAAAAAAAAAAAAAAAAAAARBOY, MOY ORL SHURLORG!!!!!!!!

WHY? Crow does a good job otherwise in his characterisations.

It's not like Americans don't have a prime example of a Brummie accent right in their midst: Ozzy Osbourne's never off the telly over there.

Puzzle solved. Someone, trying to be helpful, told Matthew Crow to do an Ozzy accent for Sol - and he thought they said Aussie...

I found the change in narrator a little off putting to start with but as I noticed that this would be the same narrator throughout the rest of the series I persevered, and I'm glad I did. overall performance went down well after you readjusted to the different sounding characters voices portrayed by Matthew Crow but by half way in this was not an issue. The story itself and plot are moving along nicely and you start to hear individuals start to group up which adds to the depth of the story than trying to concentrate from various character plots. it ends leaving you wanting to know what comes next all in all I am enjoying this series. thank you Tony Urban lets hope it carries on this good.

I thoroughly enjoyed this book, there wasn't a dull moment, everyone was in danger of being bumped off!

I really enjoyed this audiobook. Road of the Damned is a great addition to the zombie genre, with lots of zombie-killing action. I especially liked the characters' journey leading them to crossing paths.

The author's writing style is fantastic. I was utterly immersed in the plot and the outcome. Tony Urban is an exceptional storyteller. He created an imaginative and realistic post-apocalyptic world and characters with depth to their personalities.

As for the narration, I don't have the same grievances as some of the other reviewers. Personally, I didn't mind Crow's performance, I think he did very well. Overall, I recommend Road of the Damned to all zombie enthusiasts, it was worth the listen.

I really prefered the narrator from the first book. the story was fine overall but the voice switch is a minus.

Road of the Damned

Road of the Damned is the 2nd book in this series. I'm really enjoying both the characters and the story line. I only wish the narrator from the 1st book was finishing the series! Just stick with it, the series is worth putting up with a bad narrator.

The narrator is bad. cant tell where one chapter ends, the next starts. Very monotone.

This wasn’t what I was expecting so I was pleasantly surprised.

I like the depth and truth in the characters.

I am starting the next book now!

I really liked the characters and how they grew and meshed as the story progressed. Lot's of descriptive action and some not for the the faint of heart. I've read some that were cookie cutter style and this is not. I'm heading on to the rest of the series. Grab a copy and let your imagination do the rest. Enjoy..

I read a lot of this genre and I have to say, this series is shaping up to be among the best. Characters are all interesting. Situations believable. And of course zombies. Onto the next.

Road of the damned bk 2

This was a very good,funny Zombie apocolypse book!Matthew Crow was a fine narrator. I was given this free review copy audiobook at my request and have voluntarily left this review.

what a story, it was interesting to see some of the characters cross paths and to find and loss love all in one book but the end was creepy my mind wonder if ?

Crow is a horrible emotionless narrator

Maybe the publishers ran into a contract dispute with Moore (original narrator book one). But you cannot tell me they honestly thought Crow would be a decent replacement. The man reads like a machine with no accent, or emotion what so ever. His delivery is extremely antiseptic. I am struggling to get through this book because of it. Now that I see the next two in the series are performed by Crow I can't possibly get them. Talk about sucking the life out of an amazing story.