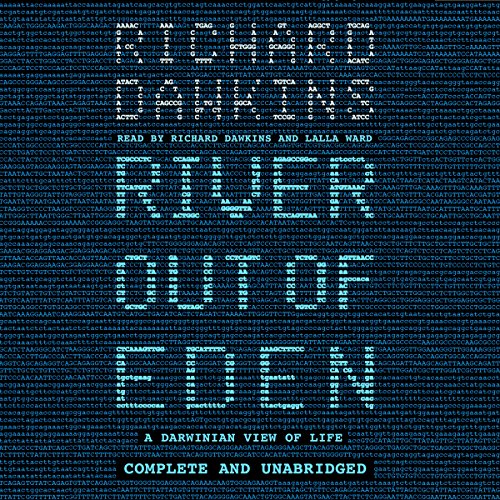 River out of Eden

The number-one Sunday Times best seller. A fascinating explanation of how evolution works, from best-selling author of The God Delusion, Richard Dawkins. Complete and unabridged and read by Richard Dawkins and Lalla Ward.

The river of Dawkins' title is a river of DNA, flowing through time from the beginning of life on Earth to the present and onwards.

Dawkins explains that DNA must be thought of as the most sophisticated information system imaginable: 'Life is just bytes and bytes of information,' he writes. Using this perspective, he describes the mechanisms by which evolution has taken place, gradually but inexorably, over a period of three thousand million years. It is the story of how evolution happens rather than a narrative of what has actually happened in evolution.

He discusses current views on the process of human evolution, including the idea that we all trace back to a comparatively recent African 'Eve', and speculates that the 'information explosion' that was unleashed on Earth when DNA came into being has almost certainly happened in other places in the universe.

What listeners say about River out of Eden

Another great book by Prof Dawkins.

He has once again made it easy to understand a complex scientific subject. Well done Prof Dawkins

what an enjoyable listen! the narratorso deliver an excellent argument & point of view! definitely a worthwhile purchase.

A dazzling intellectual experience that will keep the listener spellbound throughout. Oi'll give it foive.

Another good book from Richard Dawkins

Would you consider the audio edition of River out of Eden to be better than the print version?

No, why would it be? But it's nice to hear a book from the authors mouth and Richard Dawkins is a good narrator. Also it's convenient to be able to imbibe a book while doing the washing up which is how I just finished this book.

Another classic by Dawkins!

It's a brilliant book on evolution and genetics. Well written, pleasant to listen to, covers an important and complex subject and explains it in a simple and elegant manner. A classic!

What about Richard Dawkins and Lalla Ward ’s performance did you like?

Their deep understanding of the book.

The parallel between the IT and genetic data is interesting and insightful.

Dawkins' explanations of complex biological activity are both inspiring and easily understood. Excellent book, highly enjoyable narration by the author and Lalla Ward.

I found this one quite incomprehensible after a while - unusual for Dawkins to get bogged down in minute detail. despite several re-reads from Chapter 3 onwards I could not find the thread that so often runs through his writings - it got lost in the minutia.

I am a big fan of Richard Dawkins but unfortunately this particular book disappointed. I found it difficult to listen on the go and follow the story.

Very entertaining, easy to follow and well performed. Like all his books this one is filled with facinating facts and information

Dawkins is a star

I loved Richard Dawkins and Lalla Ward as always. Keeo on the good work. Brilliant.