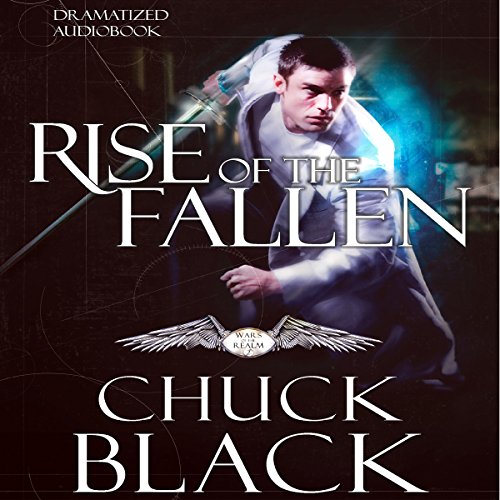 Rise of the Fallen

By: Chuck Black
Narrated by: Michael Orenstein,Leanne Bell
Try for £0.00

A 6,000 year war rages and now the demonic Fallen are coming for him, the one man shrouded in mystery. Only Validus stands in their way. Validus is the last and least of God's angels, but he's seen much across the millennia since his creation. Empires have risen and fallen as angelic and demonic forces battle in a raging war that will determine humanity's fate - and the fate of his defeated brothers.

Eventually called to be an earth-bound warrior, Validus rises to a position of power and respect, commanding legions of angels through impossible battles and overwhelming odds. But when orders arrive from the creator's most elite messenger, he finds himself suddenly demoted to a task of apparent insignificance, considering the fierce war they are waging against the demonic Fallen - the covert protection of one unbelieving man.

What listeners say about Rise of the Fallen

Where does Rise of the Fallen rank among all the audiobooks you’ve listened to so far?

What about Michael Orenstein and Leanne Bell ’s performance did you like?

wish that it didnt have to end. i have always woundered at the majesty of GOD's different creations and their possible interactions with our world.

Great gook!!!!
I have read the other books Chuck Black has written and this is my favorite.

Fascinating, a view of biblical history like no other. A call to serve God faithfully.

This book took a whole new view of how things might really be! Very fun and really makes the Bible come alive!

Rise of the Fallen (War Of The Realms)

WOW these book's blow me away in this installment we learn more about the Fall and what lead too it through the eyes of Angles who lived through it . This book is amazing it takes us through time from the creation of Earth to some of the most pivotal moments in the Bible . We also find out just how important Drew is in the Grand scheme of God's Great Plan I'm looking forward to the next book in this series Can't wait too see what happens next .

This 2nd book was absolutely awesome !! Fantastic story and charter line. I loved it. I have listened to hundreds of times. Never gets boring. Rich with feeling, drama, storyline and believable !! Almost believable !!

wonderful! loved this book even more than the first. I really thought the dramatization was just enough

Love all of Chuck Black's books and the narrators are SO good! After the first book, I had to get my hands on the second right away! Such a great story that I bought all three of these books!

Chuck Black is now my favorite author! I hope he adds on to this series!

Not a series to miss!

Chuck Black has written another wonderful story relaying the important message of God's love for humanity, His plan for our salvation and the power made available to us through Him. He expertly threads in the history of God's relationship with humanity inside this compelling story.

The story is gripping and Chuck draws us into the world of Drew Carter and the raging battle of angels and demons for the souls of humanity. His storytelling ability is fabulous and appeals to all but especially little men, who need strong characters in literature. My 5 year old son loves all the books by Chuck but especially this series.

It was an adjustment for us to listen to the narrator for this story and his style as it is different than most audio books we have listened to. However as we progressed through the books it became clear that he narrator was a great choice and really highlights the militaristic tone of the story. The narration was slow for us so we increased the playback speed to 1.1 which was perfect for us.