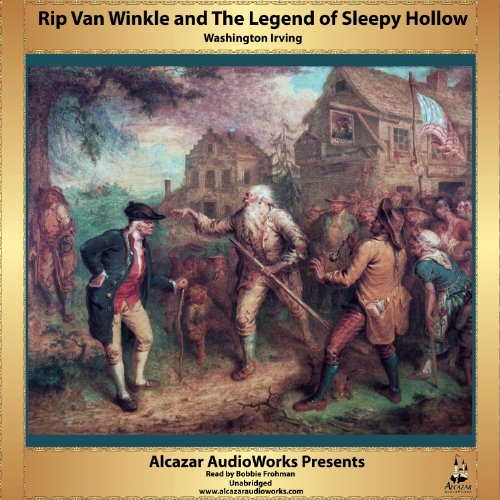 Rip Van Winkle and The Legend of Sleepy Hollow

By: Washington Irving
Narrated by: Bobbie Frohman
Try for £0.00

Washington Irving's two most famous stories are combined here. One tells of Rip Van Winkle who escaped the dreadful life of a hen-pecked husband by magical means and the other of Ichabod Crane and the Headless Horseman on their midnight ride. Experience the fright of poor Ichabod when assailed by the headless horseman and laugh at poor Rip who spends a lot of time sleeping to try to escape the headache of a nagging and ungrateful wife.

Born in Manhattan at the end of the American Revolution, he was named for George Washington, whom he met as a child of six. As a teenager, Irving lived further upstate and became familiar with the surroundings that provided the setting for his best known works, "Rip Van Winkle" and "The Legend of Sleepy Hollow"

Read well but only has only one story

This version is not as advertised. It is only Sleepy Hollow, not Rip Van Winkle.

I enjoy the classics but the down load didn't work. I was able to get a good download for Sleepy Hollow but Rip Van Winkle didn't download properly. I called to report the issue but they said it was fine. I still haven't gotten to hear it. I would like to still hear it.

Would you ever listen to anything by Washington Irving again?

Would you be willing to try another one of Bobbie Frohman’s performances?

The only thing wrong with this audiobook is that it's not Rip Van Winkle and The Legend of Sleepy Hollow. Rip Van Winkle is totally missing. If it had been both stories, it would have been at least 4 stars.

The narrator reads it quite well. I think a male narrator would have fit a little better, but Bobbie Frohman wasn't bad by any stretch, and the female voice probably helps to keep the narration feeling lighter for a child audience (more like "grandma" telling a story). The story is Washington Irving's classic Sleepy Hollow, and I think most kids will find it easier to understand and enjoy as an audiobook than in print, as the vocabulary is a bit antiquated and quite advanced. I really just wish it had included Rip Van Winkle as it said.

This audio book will not play

Would you try another book from Washington Irving and/or Bobbie Frohman?

Was looking forward to this story, but it did not play.A waste of time and money.