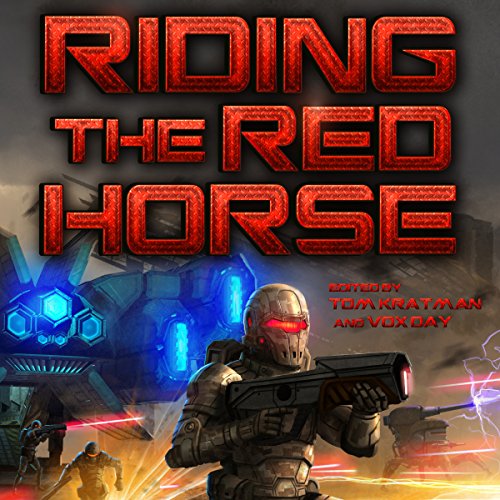 The spectre of war once more looms on the global horizon. A new generation of writers and military theorists are addressing the new forms of warfare that now challenge the nation-state's monopoly on war.

Terrorism, technology, fourth generation warfare, the decline of the Pax Americana, and the rise of China are among the issues contemplated by the 20 contributors to Riding the Red Horse, the new annual anthology of military science fiction.

Riding the Red Horse is a collection of 24 essays and short stories from technologists, military strategists, military historians, and the leading authors of military science fiction. From the Old Guard to the New, the anthology features some of the keenest minds and best-selling authors writing in the genre today. Three national militaries and three service branches are represented by the contributors, the majority of whom are veterans.

Edited by LTC Tom Kratman, US Army (ret), and Vox Day, Riding the Red Horse covers everything from real-world lasers, intelligence ops, threat assessments, and wargame design to space combats, fleet actions, and ground operations taking place in some of the most popular future universes in science fiction.

What listeners say about Riding the Red Horse

the fiction is excellent, but the nonfic makes the difference here. The only complaint I have is a lack of "pause" between different portions of story and the different stories themselves.

I really liked some of the stories, well done. Will look faward to the next one