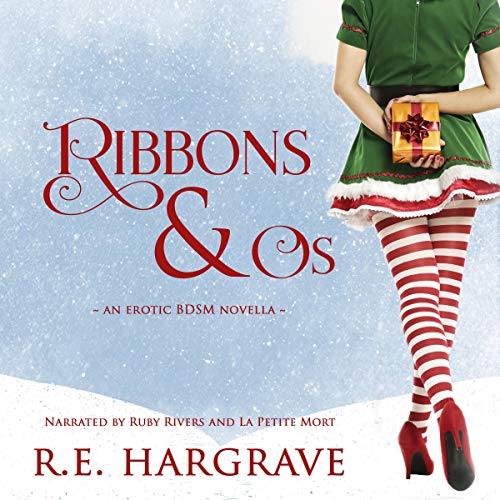 Carina Anderson has had a craptastic year. From losing her parents in separate freak accidents to finding her boyfriend and BFF engaged in kinky sex games, her general enthusiasm for life has evaporated. It's not a surprise that by the time Christmas rolls around, she's ready to lock her doors and hermit the season away - until a chance encounter forces her outlook to change. With her newfound attitude, Carina takes a wild leap and lands herself in a world she never dreamed of. A world she'll soon find she can't get enough of.

Dr. Elijah Davies has been counting down the days until he can return to England - and the creature comforts of his playroom. Now used to the hustle and bustle of London, he's only come back to Hooksett as a favor to his eccentric uncle. But when an adorable and oh-so-sexy elf crosses his path, Elijah decides his visit to the small New Hampshire town might not end up being so boring after all.

Never underestimate the magic of the season...or the power of attraction.

What listeners say about Ribbons & Os

This sexy holiday short was steaming hot! It is definitely the kind of book you read in the winter while snowed in with a special person! I love everything by R.E. Hargrave and this one may have gone to the top favorite spot!!!

The narration was amazing! I love this duo and all the steamy work that they do!

My first story from this author was delightful and sinfully delicious.
Well written characters and good storyline made the time fly while listening
No unnecessary descriptions of surroundings and good dialogues, just as I like it.
The scenes was tasteful but steaming hot.

Narrators is making the experience even better with their smooth voices and clear pronunciation. I felt like they put a lot of feelings in the reading which makes the listen very enjoyable

This is a short hot as hell listen. Both La Petite Mort and Ruby Rivers are fantastic with the narration of this little gem! I would like to hear more from this couple.

This story was just pure heat! Wow, R.E. Hargrave can certainly pack a punch into a novella! Then we get La Petite Mort and Ruby Rivers to narrate in duet and take it to a whole other level of HOT! Definitely recommend this! If the weather outside is frightful, this audiobook will turn your night delightful! 4 Stars.

R.E. Hargrave is a new author to me but this and I will be looking at further books by this author as soon as time permits.

This was a steamy listen and although not a long book I thoroughly enjoyed the story by
R.E. Hargrave and the narration from La Petite Mort and Ruby Rivers was spot on.

Ribbons & O’s was was full of fabulous scenes and honestly I was disappointed when it ended. The narrators did an awesome job narrating and bringing this story to life.

This is a sinfully seductive short story!

This story maybe short but it is a smoking Hot read! I recommend this book.
The narrator’s are a great duet that click very well together and do a wonderful job.

The hottest story ever! It made this old woman blush.

Quite simply, child, this story will melt your clothes and curl your toes.

Mama might need to listen again (and again and again!). Happy Holidays to me! Thank you!

Holy hotness! This story starts off hot and only gets hotter all the way until the end. If you want to listen to a kinky Christmas story then this is it!

Ribbons & Ohs was a great read y R.E. Hargrave. Carina has had a terrible year, she not only lost both of her parents but found her boyfriend cheating on her with her best friend. She doesnt have much holiday cheer but she finds herself with dozens of cookies at a shelter where she meets Dr. Elijah. I loved reading this short novella and loved Carina and Elijah's story.

These narrators have such s e x y voices. A great performance by both!

5 Star Audio Review
This may be a very quick listen or read but this is one very naughty very hot Christmas story about a sexy elf and a hot British doctor......
The story was perfect for the holidays and the narration was perfection including the very British accent from La Petite Mort.

Quick hot listen. Delicious narration as usual for La Petite and Ruby! The duo of combustion in my ears!!