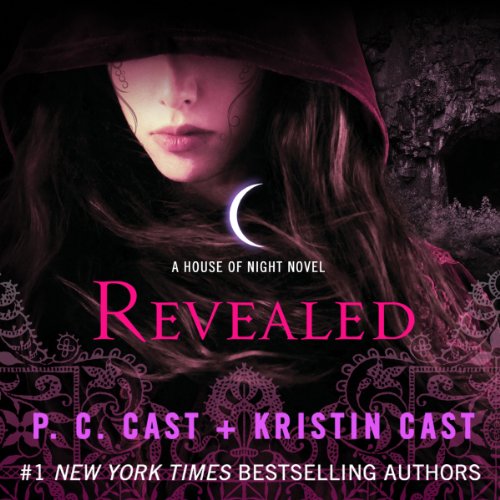 Revealed is the spellbinding eleventh and penultimate installment in the #1 New York Times best-selling vampyre series by PC and Kristin Cast.

Drastically altered after her fall at the end of Hidden, Neferet is now more dangerous than ever - and her quest for vengeance will wreak havoc on humans, as well as Zoey and her friends. Chaos is loosed in Tulsa and the House of Night is blamed. Can Zoey stop Neferet in time to keep her anger from escalating to full-on war? Or will someone else have to step in to take the fall?

The House of Night series is an international phenomenon, reaching #1 on U.S., German, and UK best-seller lists, and remaining a fixture on The New York Times Children’s Series best-seller list for nearly 150 weeks and counting.

With more than 12 million copies in print, rights sold in 38 countries to date, and relatable, addictive characters, this series is unstoppable. Now, in the eleventh and penultimate installment of the series, the action is more intense and the stakes even higher as Zoey and her friends battle to protect their school and home from devastating evil - all while balancing romances, precarious friendships and the daily drama of the House of Night's halls.

What listeners say about Revealed

When will this series finish?

Unfortunately the characters in this series seem to be battling with life threatening circumstances but where everyone else seems to be growing up, the main character Zoey aka 'Z' is very childish and very annoying. I can't really tell you what relevance this instalment has in the House of Night series because there isn't any. This series needs to end and Zoey needs to grow up as her childish terminology is getting really tiresome.

the performance if the reader is always great and the book gets every chapter darker. ready for the next one!

A good listen for YA readers

A good read, well written & preformed, I recommend it to all who enjoy YA novels.

Little Off for the writers


This whole book seemed rushed. It seem to lack a great deal of the normal for this series.
While the series in whole is remarkable. This one is lacking so much. I like many can't wait for the next of the House of Night books, and rush to get it soon as I can. Then want to read/listen to it all the way at once.
However, that being said, take your time with this one. As its not so much a novel, but a novelette. Of course there are parts to enjoy, and yes a cliff hanger ending is what one expects in a series. However, this ending felt like it should be the start of the next chapter.
This is a sad edition to the series, I'm not sure if time, or just the desire to get the next book out made a rush job of it. Either way, I expected more.

Would you ever listen to anything by P. C. Cast and Kristin Cast again?

At this point, I'm really not sure.

Have you listened to any of Caitlin Davies’s other performances before? How does this one compare?

Caitlin Davies does wonderful in this one, as she does in all others.

What character would you cut from Revealed?

Cut? I'm not sure the book could stand if anyone was cut from it...

I was so disappointed I wanted to cry. After waiting almost 2 years this is what we get? I have really loved the House of Night Series--until this one. Whats up Casts? The story went on and on, almost boring at times. If the ending had been sooner in the story with some of the issues resolved, then we could have looked forward to another great story. Instead you have clearly set up to sell another book, and some of your fans may choose to avoid another disappointment.

I'm truly torn. I had stopped getting excited about the new House Of Night books by book 8 but I can't seem to skip them either. The plots keep dragging on & the characters I had enjoyed so much I now find annoying. However the last 2 chapters made up for the rest being so so. They really ended off on a high note with Neferet finally showing off to everyone how evil and yes, at times how cool she is. It's these kinds of moments that keep me coming back. But so happy there's only one more book left to go.

End It - Make the next book the last. PLEASE!

They need to end this series. I loved this series, but the last few books keep dragging. It is time for the final farewell, and the authors really need to step it up for the ending so all of the readers who have lasted this long get the finish they are hoping for and deserve.

I absolutely enjoyed the narration, very nicely done and engaging. I recommend this book to anyone interested in an interesting and engaging speaker. This is not my favorite book of the series, but it was still enjoyable.

I love the House of Night series. I felt the narrator did a great job. Loved it. There was nothing I disliked

love this series, I have read the series twice, also love the narration by Caitlin Davies.

there better be another book to make up for this

this book was not what I expected. I feel like I've wasted my time reading all 9 books just for the 10th book to be a let down. I'm mad at zoey n the writers

for the book to continue its natural course. for zoey and her nerd herd conquer all

Was Revealed worth the listening time?

Zoey is not the character I thought she was. She has become very annoying. She overreacts over everything. I no longer follow her logic. This was my least favorite book so far:(

I feel like this one fell a bit flat compared to the rest of the series's.With that said they haven't lost a fan :) going to move on the the next and hope it reels me back in.