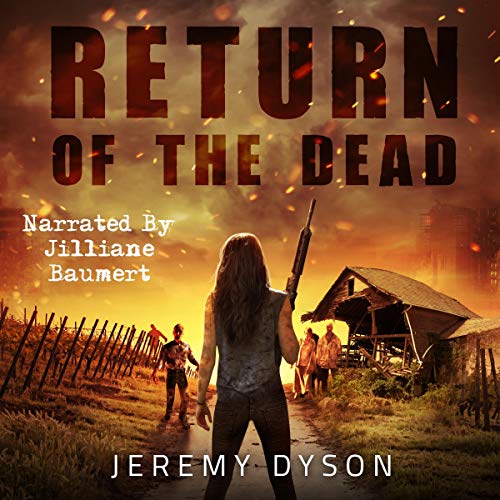 Return of the Dead

By: Jeremy Dyson
Narrated by: Jilliane A. Baumert
Try for £0.00

A violent disaster has caused the dead to rise, but that was only the beginning. Now, society has broken down, the dead control the cities, and what is left of humanity is entangled in a fierce struggle for survival and control. Even facing extinction, mankind still struggles to overcome the ideological differences that have divided the world for years.

When Scout Johnson comes across another group of survivors, she soon finds herself in the crossfire of a bloody battle between opposing factions. One group seeks to find a cure and restore order, while their enemy sees the outbreak as an opportunity to destroy the corrupt system and grab control. Scout must align herself with the lesser of two evils in order to survive, protect those around her, and fight to save what remains of humanity.

With a mix of new and familiar characters, Return of the Dead takes the series into the next phase of the apocalypse with a fresh narrative perspective, while staying true to the classic zombie genre themes.

What listeners say about Return of the Dead

I really enjoyed this book, it was fast paced and action packed, the story progresses seamlessly between books. The characters were enjoyable, some more than others, this series is addictive, I can't wait for book 3, the narration was wonderful. I received this book in exchange for my honest review.

I liked the story for this book. the characters were believable and the plot easy to follow. worth a listen.

this book had it all. action and great story line. the characters were well written and kept me wanting more. I enjoyed this book thoroughly.

I really liked this book. It was nonstop from the beginning. I enjoyed the way it focused on a different band of survivors than the first book, then employs a great twist toward the end.

The first book in this series was very good. After 3 years, Dyson writes a sequel—sort of. The writing isn’t as good. The characters and the plot are pretty basic/stereotypical. Of course, it was difficult to gauge because of the poor narration. Baumert has a pleasant voice, it’s just not versatile. Furthermore, most of the book is read in monotone. Her voice doesn’t always match up with what is going on in the book. I gave up about half way through.