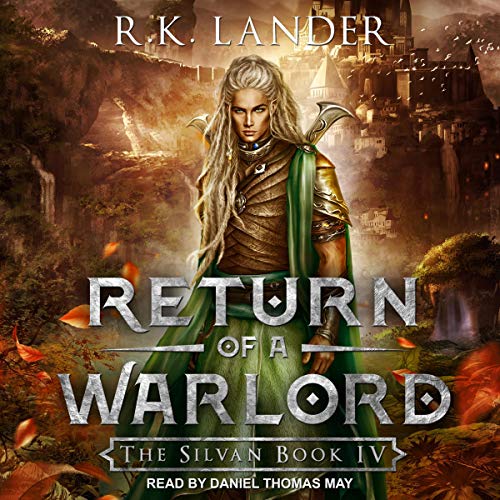 Return of a Warlord

From a new dawn, a Warlord rises.

After the Battle of Tar'eastor, the Great Forest waits for the one the Silvans claim as their Warlord. With his past unveiled and his future destiny clear, Fel'annár and The Company journey home together with Prince Handir and Gor'saden, the commander Fel'annár has named father.

With documents that incriminate the enemy, they must travel in secret to protect their treasure and Fel'annár from those who seek to kill him. Meanwhile, the forest king struggles to maintain his throne under the final onslaught of Band'orán and his Alpine purists.

Raging rivers and treacherous cliffs. A perilous sea and ruthless assassins await Fel'annár and The Company as they approach a forest on the verge of civil war. Can they make it in time for the final showdown? Can the crown prince hold the enemy at bay? Long enough for the return of his brother? For the return of the Warlord?

What listeners say about Return of a Warlord

After reading the first three books of this series, I was eagerly anticipating the continuation of Fel'annár's story, and could not have been more delighted with the result.

This is probably the most action-packed book in this series so far, with an excellent balance between pacing and detail. What may have surprised me the most was how much I started to better understand and maybe even sympathize with characters who until now had been supposedly clear-cut villains. R.K. Lander has a true talent for bringing the reader into the hearts and minds of her multi-dimensional characters.

awesome! well written, I am now looking for the next book on audible.
I am hopeful there is a fifth book.

i wish book four would have been longer and a bit more in the wnding. other than that i truly enjoyed the whole series and the narater

I love this series it’s so underrated!! It’s fantastic and unique!
I can’t wait for the next book!!!!

Great series, looking forward to the next book. Very well written. Really draws you in.

I read all the 4 books within 4 days and i am hungry for more. R.K Lander- Please I can not wait for book 5&6 !!!!❤️exceptional performance by Daniel Thomas May!! Thank you so much.

One of the best series I listened to. Great story. This is the fourth time to listened to all four books. can't wait for book number 5 and 6. Its like I am right there with the Company.

One of my favorite series I found this year.

Well thought out and cleverly written story, amazing relatable and deep characters and relationships, unpredictable yet satisfying narrative and story throughout.

The story line and characters continue to develop. The writing is excellent, fully equal to the last two volumes. And Thomas May’s narration adds depth and nuance to the prose that you just don’t notice when you are racing through the kindle book.

GREAT SERIES
Have read and listened to all 4 books . Anxiously awaiting next one