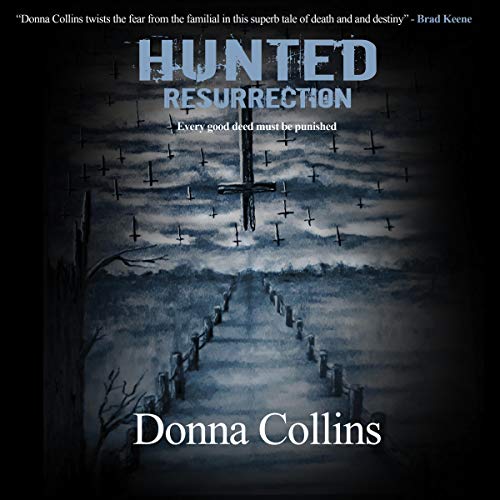 By: Donna Collins
Narrated by: Andy Stevenson
Try for £0.00

Having brought Eliza back from the dead, Roman's unsanctioned resurrection has revealed his whereabouts to the same people he has spent a lifetime hiding from - and now, he needs to get as far away from the Hamilton mansion as he can. Alone.

The hourglass has turned, and time is slipping away, but Roman can sense that things around him are not how they should be. Now, he has a decision to make. Does he take off before his hunters arrive - keeping Eliza from harm but leaving her to deal with the aftermath of the night before? Or, does he take her with him and pull her into further danger that could ultimately cost her her life?

What listeners say about Resurrection

I had listened to the first book in this trilogy – ‘The Sacrifice’ – and loved it, so I was particularly looking forward to the release of this one – ‘Resurrection’ – which is book 2. I wasn’t disappointed!

Donna Collins writes so uniquely and I marvel at an imagination that can come up with such intriguing plot-lines and vivid characters.

The love-hate relationship between Roman and Eliza leads to a lot of sparkling and often humorous dialogue, with the tension increasing as they try to keep one step ahead of the evil Sherriff, who is determined to take Roman back to Purgatory.

Andy Stevenson’s narration is amazing. The way he captures the personality of each character and provides them with an instantly recognisable and unique voice shows great acting skill. The Sherriff, in particular, doesn’t sound human – which is appropriate, because he isn’t!

Even if you’re not a fan of the horror genre, give this series a try because I can’t imagine anyone not finding it entertaining. But make sure that you listen to Book 1 first, otherwise you might struggle to understand the opening sequences of Book 2.

After Roman saved Eliza and got her soul back from purgatory he realises something isn’t right with her . When her soul was taken from purgatory a psychopath attached himself to her . With her brother Billy in purgatory the sherif of purgatory hot on their heels and the psychotic hitchhiker keep taking over her body Roman doesn’t know which way to turn. Another amazing book this series is so good and Andy Stevenson narrated perfectly I am eagerly awaiting book 3 .

I was given this free review copy at my request and have voluntarily left this review.
Story well written & great narration.

Andy Stevenson narration was perfect for this book.

Great sequel. The characters and storyline are brilliant. Roman and Eliza are making a great team. Roman is obviously not quite what you first think. Things get even more harrowing and cruel. There’s new enemies after Eliza and Roman, a brother stuck in Purgatory.
Horror elements not for the faint-hearted.

with our main characters on the run from the underworld sheriff after them and with Eliza suffering from side effects from the resurrection, the sheriff isnt there only problem they have to deal with while also figuring out how they can get Billy out of purgatory.

I was given a free copy of this book and I'm leaving an honest and voluntary review.
Book 2 picks up from the 1st book. it's just as thrilling, exciting and full of extremely well writing adventure. there's a new sherif in town, making the listening all the more enticing. the usual characters are perfectly suited, the introduction of new characters melds superbly in this thrilling tale.
The narration is flawless, capturing the emotional and essence of each character. A definite winning combination.
I would highly recommend this serise to anyone. 5 STAR easy.

Another thrilling story to this series! I was very intrigued throughout the book and the cliffhanger ending just left me wanting the next book to see what happens next to them. Narrator did a great job for the male characters but the female characters still throws me off some, but overall a wonderful book.

I found this book very intriguing. A very interesting take on Pergatory, where people can’t die but they can feel pain. So were torchered over and over. Interesting, twisted, horrifying, thrilling, heartbreaking, all in one.

absolutely loved this story it was captivating and mesmerizing. looking forward to many more

The action is non stop and the tension is high throughout the whole story. There isn't a minute to rest or take a deep breath. Eliza is so unreasonable and hard headed, that, I wanted to throat punch her at the very least. I don't know how Roman can put up with the insanity that is her, let alone be attracted to her and put her before himself!!???? The cliffhanger ending had me bawling. I need the next book. I voluntarily listened to a free copy of this and am giving an honest review. The narrator did an excellent job with voices and expressions bringing the characters and story to life.

Resurrection is an intense book that is full of action and suspense. The tumultuous relationship between Roman and Eliza is running hotter. I love the back and forth banter between the two major characters because the chemistry just keeps intensifying the more they argue. Andy Stevenson as the narrator just adds to this intricate story because he is phenomenal. I can't wait to see what happens next. I highly recommend this book to anyone who loves intrigue, suspense and the paranormal all wrapped up together.

I was given this free review copy audiobook at my request, and have voluntarily left this review. I really enjoyed this book. It's a dark tale, with a very interesting plot and an unique plot. Roman once again proves "no good deed goes unpunished", the events after he brought Eliza back to life spiral out of control. The Sheriff appears to take the spirit hitch hiking in Eliza body back to purgatory. The race against time is started for Roman and Eliza. Well written characters with a fast paced plot that will keep you listening longer then you intended. I'm looking forward to book 3.

Eliza and Roman are on the run while being hunted by the sheriff looing to bring them both back to purgatory. Eliza discovers she has supernatural abilities, but also has an evil within her...

This book surprised me. I didn't expect to enjoy it as much as I did, but I found myself eager and excited to hear more. Why did it end? I must get my hands on the next one in the series!

The narrator was brilliant with energy and passion through his performance. He expertly varied his tone and tempo to match the emotion of the scenes. It was a truly entertaining listen.

I highly recommend this book! Expect to be surprised!

Note: This book was given to me for free at my request and I have left this objective review voluntarily.