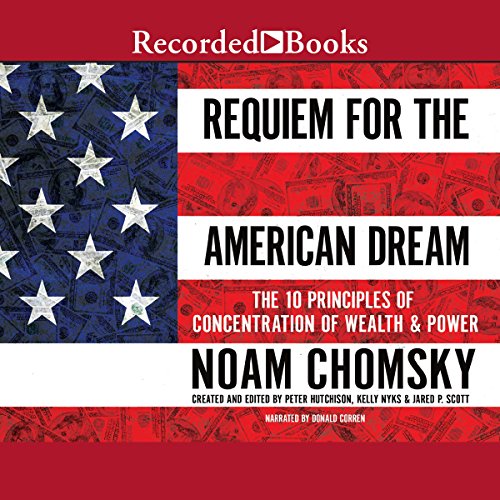 Requiem for the American Dream

By: Noam Chomsky
Narrated by: Donald Corren
Try for £0.00

Noam Chomsky is widely regarded as the most influential thinker of our time, but never before has he devoted a major book to one topic: income inequality.

"During the Great Depression, things were much worse than they are today, but there was an expectation that things were going to get better. There was a real sense of hopefulness. There isn't today.... Inequality is really unprecedented. In terms of total inequality, it's like the worst periods in American history. But if you refine it more closely, the inequality comes from the extreme wealth in a tiny sector of the population, a fraction of 1 percent.... Not only is it extremely unjust in itself, inequality has highly negative consequences on the society as a whole because the very fact of inequality has a corrosive, harmful effect on democracy."
(Noam Chomsky, in Requiem for the American Dream)

Requiem for the American Dream is not an essay collection but an entire work of some 70,000 words, based on four years of interviews with Chomsky by the editors. Chomsky considers these to be his final, long-form documentary interviews. It is a book that makes Chomsky's breadth and depth accessible and at the same time gives us his most powerful political ideas with unprecedented, breathtaking directness. It will go down as one of his greatest and most lasting contributions.

Requiem for the American Dream is being produced in tandem with the film of the same name that was recently released in selected theaters to rave reviews and standing ovations. It will be on Netflix and touring colleges prior to the book's release.

What listeners say about Requiem for the American Dream

Documents how US plutocracy oppresses citizens

I have read/listened to this book, in my case Audible and Kindle versions
twice, and plan to read it again. This book, an expanded, edited version
of the documentary by the same name is an important and well put together
compendium of Noam Chomsky's ideas on America's political order. It is
an important book to read if you are concerned about contemporary trends
with American politics and the 99%.

Many of Chomsky's ideas are in opposition to conventional thinking that they
seem strange at first, and take a while to sink in. This book is Chomsky distilled,
a concise clear summary of ideas most of us are too busy to think about or too
distracted to perceive, the "red pill" that clues the reader in to see the "Matrix".
Agree or disagree, you will never see this country the same way.

Noam Chomsky has spent his lifetime studying history and current events and
has passed on his insights in over 100 books and countless lectures, but this
book is an edited collection of the main criticisms of American politics. Our
system calls itself democratic, but works by keeping working citizens out of
the loop; without the information, tools and connections to understand our
common interests as citizens to fulfill the promise of our Constitution. Chomsky
shows that 85% of government policies go against what the people want when
they are polled.

An important point in this book is how in our society/economy we are
trained in what Chomsky calls the "vile maxim", morally evil rules of conduct
as being normal. The vile maxim is described as "All for ourselves and
nothing for anyone else" or care only for yourself and forsake all others.
How this is programmed and promulgated in our country makes the difference
between the US and the rest of the developed world - widening gulf.

We've ended up with a morally bankrupt society that harms many of its people
while telling them they live in the greatest country in the world and pay to have
our military secure resources and power for the tiny elite who do not serve the
interests of the American people. In other developed countries they have
sustainable social systems that support and help their people, and their citizens
are better off than Americans on many dimensions while our media tells us the
opposite.

The book is put together in elegant order, well written; a handbook for understanding
the American tragedy. The "plutocrats" have worked efficiently to direct wealth and
power to the top and to disempower citizens and trick them with propaganda.

The Audible version is done well. The reader's voice is a bit harsh and cold
reminiscent of a college lecturer, but it is clear and the sentences are clear
and intelligible.

Requiem For The American Dream by Noam Chomsky 5/5

Book is great, Narrator is terrible

Definitely. Very insightful analysis with support from historical references. But I would recommend that they read this book rather than listen to Donald Corren narrate.

This book really doesn't have an "ending", just a scholarly analysis of various points.

By choosing anyone else as the narrator. Book itself & content is excellent. However, the narrator frequently substitutes words that change the meaning ("was" for "is", etc.). In fact there is such a substitution in the very first sentence of the forward note ("subjectively" for "objectively"). Clearly, no review was done of the Audible recording.

Did Requiem for the American Dream inspire you to do anything?

Read more books by Noam Chomsky, and never to listen another book narrated by Donald Corren.

Another narrator should be found, and the narration should be re-recorded using a new narrator. Noam Chomsky would be a good choice to narrate this book.

Book version of the documentary Requiem for the American Dream
Very well structured and well written.
Important references give support to the conclusions
Highly recommended for those interested In understanding the American today reality

I wish I could get my friends and family to read this book!

As always his books are very educational. I'm am also glad his view where straight forward and backed by facts. I enjoyed all of the book but the last chapter was my favorite. I don't think he meant to move anyone to tears but I was.

if you liked the movie, you'll love the book!

the structure is the same as the movie, but the analysis is more detailed. also, there are few updates, including Donald Trump.

A swift but comprehensive summary of the neoliberal phenomenon over the last 40+ years and cultural repercussions as a result. Chomsky writes in clear, plain language so as not to alienate readers who are just starting to gain insight into the political system and beyond. Must read!

The outrageous take over of humanity

As Voltaire once said the one thing about common sense is it's not so common.

Chomsky makes so much sense, yet no one is doing anything. The divide between the haves and have nots has never been so great with the Majority of the wealth controlled in 1% of 1% of the population while things becoming so bad for the rest, and yet nothing is being done other than enrich the wealthy and bailout the banks.

A believer in the Edmund Burke school of thought where everyone needs each other to prosper. While things are broke, what we need is incremental change. Besides those at the top will still need the rest to afford their products.

I am now slowly beginning to understand that the system is rotten to the core. Individuality has morphed in to a selfish, self-centred, no one matters but myself to the point of absurdity. May be Thomas Paine was right. The need of a total overhaul, which unfortunately will not come quietly is the natural state.

It is a case of too little, too late. When people are outraged it will be too late to try and fix things, and it seems we are very close to this. A scary future ahead of us.

Must read for everyone!

I learned quite a bit.

I learned things about the beginning of the USA I didn't know. Sever things about classes I wasn't aware of. It helped remind me that our country has a lot to work on. I'm more aware an better educated after reading this book.

Pure Noam in a nutshell....unvarnished truth. of how we got here...unvarnished. If we don't know our true history, we will relive it.

the documentary with footnotes

this book did well at representing the whole of Chomsky's works which was summarized in this book and the documentary by the same title. the book I found (though much of the words used are quite the same as that of the documentary) to be better than the documentary because it came with the footnotes from which his information is founded which is important to reinforce points and help clarify some daunting questions.