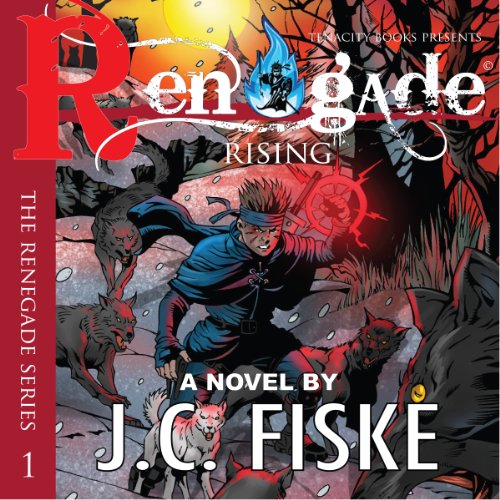 Life's tough if you're a boy named Gisbo. Besides having a name that means "dog" in a barbaric tongue and being forced to live all alone in a manure shack outside the city walls, Gisbo has also never soared on a flying sword, raised a boon animal, or made a single friend.

When he isn't washing the graffiti off his shack, Gisbo's time is spent dodging insults from his spoiled classmates and fighting for his life against the city's arrogant clash team. But all of that is going to change. Gisbo is finally sixteen and ready to try out for Elekai' training in hopes of becoming an Elekai' warrior, his biggest dream. However, when the tryouts go terribly wrong, Gisbo is whisked away to a life he never dreamed possible and learns that sometimes, truth can be stranger than legend when you're Renegade born.

Worst piece of narration that I have suffered through to date!

Good story, but will not continue the series due to the narrator

It's just what you want in a hero

If you could sum up Renegade Rising in three words, what would they be?

The age old but never cliche hero that comes from nothing but finds out he's so much more.

Which character – as performed by Sonny Dufault – was your favorite?

In this book it's Falcon.

The part where even though Falcon is covered in crap he still manages to give Gisbo some fantastic fatherly advice. It was humorous and moving.

J.C Fiske starts off his series with a BANG. Fun characters and an interesting story will keep you coming back for more.

I heard about this series through a friend and I am so glad I did. If you are into action/adventure/fantasy books, then this is the right book for you!! I don't want to give anything away so I will just say this- if you are looking for a book to entertain you and one that you wont want to put down- look no further than this one. Enjoy!

Starts with anticipation of a wonderful coming of age adventure but soon degenerates into a poor YA fantasy that leaves me cold and disappointed.

This book is awesome and really cool.

This book is awesome and really cool. I loved it a lot. I loved this book

Wouldn't recommend even on a sale

The narration for this book is one of the worst I have heard on audible. Sonny Dufaut is simply a horrible pick for this book and sadly his name is on the four sequels at this time. The voices do not fit the characters very well, but it is hard to tell because the writing was not that great either. There are some elements there which make it seem like this could be a good book. The story is about a world full of meta humans who have out lawed and hunted down a certain class of their kind. The main character is an orphan that was left to the care of a society who suspects he may be one of those outlawed classes. The writing was a little immature and there were too many parts that made this feel like a children's book. What is worse is the dialog that doesn't seem to fit right for these character. But most importantly for me is I didn't care much for the main character. He came off too brutish and appeared to have a chip on his shoulder.

Terrible narration and simply not a book made for audio

Would you try another book from J.C. Fiske and/or Sonny Dufault?

It's hard to say when they both seem to be made for each other... And in turn ruin the whole thing so throughly. But yes I would. Not sure I'd pay money for it though...

First you noticed how terrible the narrator is and his choice in voices. Then you start to realize that the he is also being hampered by the odd writing... There are so many phrases that shouldn't ever be said by a child or a grown man... It's nearly embracing to listen to too loudly. I'm amazed the narration ever was finished... Sometimes you wonder if a narrator can do his job and dislike the book.

Possibly a good story... in there somewhere. I listen to a lot of not so good audio books and like them for what was done right. I try to ignore what I don't like. I also keep the stop button far from me, to prevent me from quitting out of impulse... Even so I've tried ten or more times to listen to this book and finally found a day when I couldn't get to the stop button.

I first wanted to believe this book was written in the 80s or earlier. But it seems it was first published in 2011. I can accept older books for their flaws if they were wrote before computers were widely used. Meaning unbiassed criticism was harder to come by. But 2011 is simply unacceptable. For this reason I'm writing this review.

Where does Renegade Rising rank among all the audiobooks you’ve listened to so far?

With in the top ten

What other book might you compare Renegade Rising to and why?

The chronicles of luminaries series, and maybe king of swords: the starfolk

He was pretty good

Maybe a two or three sitter

I really like the idea and plot but it was hard to follow the narrator sometime I couldn't tell wen he wen from one person to another like I usually can.

I was hoping for more.

I was very hopeful that this book would be good, based on the other reviews. I even bought the second book and was looking forward to a new series. Unfortunately that was not to be. I found myself a few chapters in and hating the main character and not caring about anyone else. Narration was really quite bad.

The prologue was mildly interesting but confused, and the overly melodramatic way which flowed straight into the first chapter with no pause in narration but with a huge scene jump. The Cloak was BLUE! yes and? so apparently a blue cloak means something, I will never know. The child is wearing RED! everyone freaks out, except they didn't notice until they are in the presence of some guy in charge of something (very very unclear)

The setting is supposed to be a fantasy setting but the use of modern idioms and terms as well as concepts kept making me wonder what was going on. For Example, the main character lives in a run down shack, alone as a young child, no parent figure or apparent source of income. Yet he attends school, and the shack has a key and they spray graffiti on the walls, which is being cleaned off by a random janitor. These elements were so disparate that they broke the suspension of disbelief for me.

The book seriously felt like it should have been set in modern times as the author has no clue how to set something back in time or into a fantasy setting. The author obviously wants a high school student to be snubbed by the football team and he wants to be a SEAL or something, who gets magic powers. I might have been able to get through that story, but not this one. ​

I was very disappointed and really could not get through the first few chapters. I hope that the series gets Much better, I won't find out unfortunately.

if you need a good laugh along with your fantasy

Don't know what happened to my previous review but I am happy to write a new 1 in hopes the author will continue his writing
I have probably listened to this book no less than 2 dozen times.
I dont wright short 2 word reviews, i dont believe thay telling someone "loved it" does anything the star system doesn't already do.
I loves this book and the whole series, it is not my usual sort of fantasy, I usually go with urban or epic, but I am glad I took a shot on this, because it has the ability to change my mood for the better, there are certain parts of this book that not only male me smile, but to laugh out loud and that is something very rare for me. I could deceive this book as a fantasy aimed at the ya audience, not being a member of said audience would go to show how meaningless that would be, so I will give it a short sum up: There is action, superhuman abilities, young love along with other life lessons and a healthy dose of toilet humor, this book is just plane fun and a break from the doom and gloom that seem to be all to abundant in fantasy, there are times when I get engrossed in a heavy story, but as engrossing as this book is, it leaves me lighter. Hope you enjoy it as much as I continue to and I hope this review has helped for better or worse