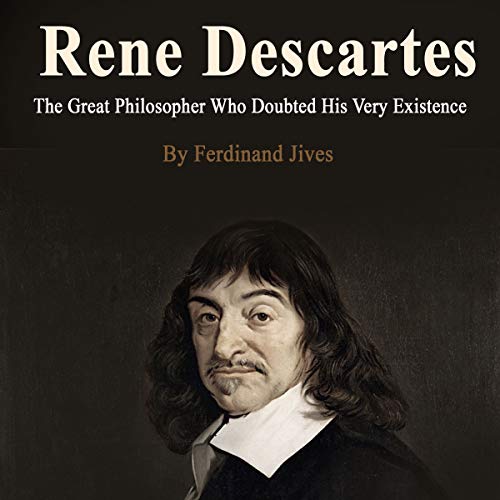 Rene Descartes: The Great Philosopher Who Doubted His Very Existence

Rene Descartes: The Great Philosopher Who Doubted His Very Existence

By narrowing down everything to the last proof of life, he came to the conclusion, “I think. Therefore, I am.”

Hear more about the genius man who used logic and evidence to figure out the realism of life and laid the foundation of 17th-century Rationalism. He drew conclusions based on reasoning that makes sense. His rhetoric included statements about God, the universe, and our perceptions of reality. Theories from this works have contributed greatly to the philosophical stage the people were at during his life.

Subtopics of this book include:

Regarded by many as one of the most intelligent philosophers with the most logical conclusions and detailed, analyzed theories, you cannot miss the thought pattern he has given humanity. Enlighten yourself and start listening now!

What listeners say about Rene Descartes: The Great Philosopher Who Doubted His Very Existence

I think, therefore, I am

Being one of my favorite philosophers, Rene Descartes was a logical thinker who was not afraid to stretch concepts all the way to God and the universe.

I was interested in the philosopher who doubted his own existence. His conclusion is that he exists because he thinks. Pretty smart.

I mean, listening to this ancient's philospher's ideas made me take another look at life and ponder its significance.

I love the ideas and concepts of Rene Descartes. If you ask me, this is one of the best philosophy books out there, no matter how short it is.

I looked at some other books from Ferdinand Jives and decided to go with this one. No complaints. Lovely info.

I am always interested in learning more about philosophy and Rene Descartes is one of the most interesting ones out there.

Rene Descartes was a genius and it's nice to listen to a book that describes his main ideas and lifestyle.

The life, ideas, and main works of Descartes are being described in this brief book, and I liked it.

The philosopher of all times

By far one of the best philosophers of all times, Rene Descartes nails it, and this book goes a long way explaining what he was all about.

The best philosophers were described by Ferdinand Jives, and this book adds to his genius. Great author.

He was a genius

In my opinion, Rene Descartes was a smart philosopher. It's worth listening to some of his ideas and background.