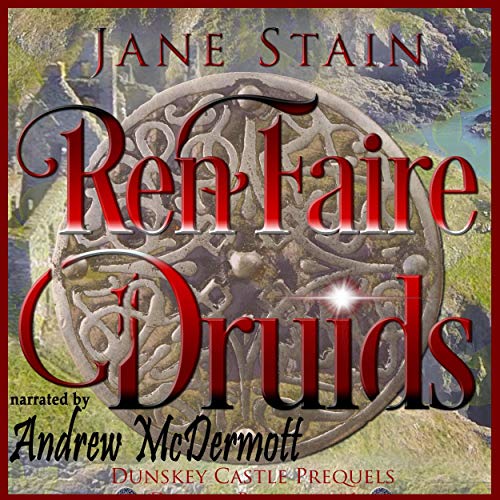 When Emily and her best friend buy dresses at the Renaissance fair, a magical romantic world opens up. One of the Highlanders is obviously the real deal. And he’s flirting with her. But now the fair people keep sabatoging her attempts to talk to him. By poking around all summer, she finds out the Druids are sending him home to 16th century Scotland in the fall. She’s determined to go with him.

RenFaire Druids: Dunskey Castle Prequels (Druids Bidding Book 1) is a little bit different as a time travel fantasy since it includes a smartphone app that apparently works in the past as well as the present to facilitate time travel backwards and forwards and was developed by Druids! Well, let’s face it, anything is possible in fantasy and sci-fi as it is a suspension of reality and a dream of other possibilities, so why not? OK – this is not in the league of Outlander – not even close. Let’s face it, Diana Gabaldon’s work is a masterpiece and she does a lot of background research for authenticity so I would always want to give her work 10 out 5 if it was possible. However, it doesn’t stop me enjoying other time travel romances such as this one. This box set has action, adventure and romance as well as the time travel – and there aren’t any graphic scenes so it makes it suitable for YA and upwards. The Audible book is superbly narrated by Andrew McDermott and I thoroughly enjoyed listening to it.

I read Renfaire a few years ago and loved it then. But to hear it from a person with a true brogue made me just enthralled with the story. It really made all that I read come more to life than it did before. Andrew McDermont did one wonderful job in reading this great story.

Two books in one! Emily buys a dress at the Renaissance Fair and falls for a real deal Highlander who is about to be sent back to 16th century Scotland Andrew McDermott brought this story to life brilliantly.

RenFaire Druids is a time traveling story packed full of action and adventure! This story follows two different hero/heroine tales. First we meet and follow Dall & Emily as they fall in love & fall thru time. The second half of the book has us listening to Peader and Vange on their adventure. Since there are two heroes and two heroines, this story could have been divided into two separate stories, but since it’s packaged together it is a great “bang for your buck” or Audible credit! 😜 I am a big fan of this narrator! Andrew McDermott really brings the story to life with his accent. I always enjoy hearing his range of voices for the different characters. So glad to see him doing more romance novels! 📚 💕

I enjoyed this story. There are a few places where the suspension of belief is a little hard - like taking an iPhone back in time, but overall it is a good fantasy story! I love RenFaires, having been a character actress in one several years ago and I enjoy Druid stories, so it couldn't go too far wrong for me! I absolutely love Andrew McDermott's narratives and would willingly listen to him narrate the dictionary! In this case, the Irish accent really accentuates the story and helps you fall into the world much deeper than just reading it would! I highly recommend both the book and other works by this narrator!

I'm sorry to say that this book was not for me. The beginning was fine, the concept of how the characters met was fine, but the problem I had with the plot of the book is: Emily just assumes from the beginning that Dall is a time traveller; there was no conversation by anyone of this, no mention of what year he was from; she just assumes - he's Scottish, so, because I like Outlander, he's a time traveller and I'm going back with him to 1540 .... when was there a mention of what year he was from? And when she goes back in time, she brings a functioning iPhone? No technology that will allow it to work in 1540, but it's a functioning iPhone. So, I have to say, I got about 2 hours into the book and stopped. I hate giving bad reviews, I think everyone who puts their work out there for others to read are very brave, and maybe it's partly due to the fact that I'm not much into romance novels, but I couldn't finish it .... this book was not for me. I'm not saying that others will find it bad; I hope others enjoy it a lot

This is my first time listening to this author and must be my third time listening to this narrator and both were great. RenFaire is set at a Renaissance Festival controlled by Druids. It's at this festival that Emily and her friend Vange meet Dall who is hiding a secret curse placed upon him by the druids (Obviously time travel...since its a time travel romance). The way they time travel was a novel idea that had me smiling and despite having an interest in the highlands I hadn't actually heard of Kilchurn castle before (Shame on me). All in all a great listen with enough passion, fights between the couples and ups and down to keep me waiting on the next book coming out. As this is a bundle/omnibus there are two books inside. The second looks at Emily's friend Vange and Dall's son Peader. Both stories were great and I actually preferred Vange and Peader's story as there was a little more action and drama. Book one seemed to set the stage and book two with Vange etc seemed to light the fireworks. I'm trying to think of what story this is comparable to. To me, it's more innocent than Outlander which I read it being compared to. The only stories I can think of would be (although different genre) Stardust or The Chronicles of Narnia due to the great story and romance but little heat.

Do I Want ti Time travel??

I have read Jane Stain's Renaissance Fair books and I am so glad I listened to this audio book. It brings it all together for me. At first the accent of the reader was a bit hard to follow, but it is very right for this story. Love the whole concept of time travel, but it is not my wish to travel. I do love to hear the stories o the ones that do.