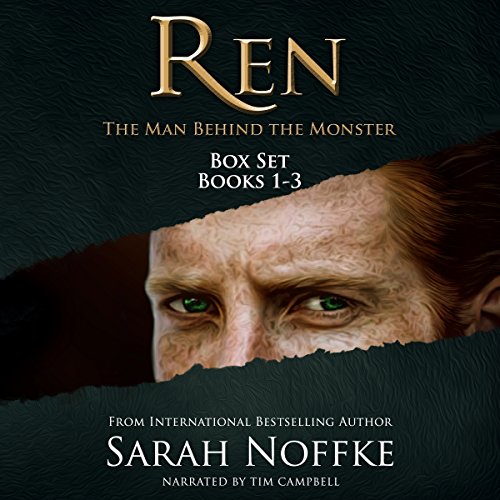 A bordering psychopath must face the monster inside him before it tears him apart.

Born with the power to control minds, hypnotize others, and read thoughts, Ren Lewis is certain of one thing: God made a mistake. No one should be born with so much power. A monster awoke in him the same year he received his gifts. At 10 years old. A prepubescent boy with the ability to control others might merely abuse his powers, but Ren allowed it to corrupt him. And since he can have and do anything he wants, Ren should be happy. However, his journey teaches him that harboring so much power doesn't bring happiness; it steals it. Once this realization sets in, Ren makes up his mind to do the one thing that can bring his tortured soul some peace. He must kill the monster.

this series has a great amount of character development. The main character Ren begins his story at an early age and alludes to other stories in this authors repertoire. many of us have followed him through the other stories. We were all dying to hear where he came from, why he did what he did, and why he is who he is. And now we know. We see the evolutionary development of a character who is the most natural and Human of all the characters I've ever read. He is irritated, he doesn't care about things but yet he still puts his life on the line everyday to help the world as a whole. He doesn't care for people but will save Humanity. I, personally, absolutely adore his utter snark throughout every scene he has ever been it.

this man is an British a**, and it's brilliantly perfect. delightfully sarcastic with a twist of arrogance that by about half way through the 2nd book you'll be thinking about what ren would be saying every time someone irritates you. I love the way his mind works lol. I read the Lucidite series 1st and it fills out some of the details that are hinted at in the 1st book as a bit of it runs along the same time frame. there is lots of cussing, some violence, and some sexual content. I highly recommend this book for anyone who doesn't offend easily and is looking for something blunt with a bit of unusual humor.

Even a monster can learn to love

Awesome all of it

Ren Lewis likes his life the way he likes it, no changes, no surprises. But in this book he gets both in a big way. In this world of dangers for dream travelers, this is really a big distraction for Ren to get used to and it just gets worse from there.
If you read or listened to the first Ren Book: Ren Man Behind the Monster you will love this one. Narrator Tim Campbell is back with the audio version. If you are new to the series, well I don't often say this, but this is one series you really should listen too. Tim Campbell makes the most awesome Ren Lewis, think Stewie from Family Guy all grown up. Snarky, narcissistic, funny, genius and awesome.

Wow the voice actor for Ren was exactly how I imagined him to sound. He was stolen right out of my head! I love being able 2 listen to the three stories all consecutively.

Sarah created an amazing universe with the Dream Travelers. So glad she is sharing it with us!

Ren Series Boxed Set (Ren #1-3) was a great read by Sarah Noffke. This box set consists of; The Man Behind the Monster, God's Little Monster, and The Monster Inside the Monster. The Man Behind the Monster (Ran #1) was a good read by Sarah Noffke. Ben Lewis was born with the power to control minds, read people's thoughts, and hypnotize others. Ben knows that no one should be born with so much power. At ten years old, he received his gifts and a monster awoke within him. He allowed the powers to corrupt him. Ben knows that in order to find some peace, he must kill the monster. God's Littler Monster (Ren #2) was a good read by Sarah Noffke. Ben has everything he's always wanted but still feels miserable. He blames this on the monster buried inside him. He doesn't know that his life is about to be intensely transformed. With all this change he finds out how flawed and vulnerable he is. The Monster Inside the Monster (Ren #3) was a good read by Sarah Noffke. Ren feels like this next challenge will be the thing that undo's him. He discovers his daughter is hiding that she's pregnant. He avoids family responsibility by throwing himself into his work.

what if a hero is a monster?

this book is about a monster of a different type. this monster also happens to save people by being a monster. very interesting book to listen to.

I love Ren Lewis even though he is a jerk in the highest order. I catch myself laughing out loud and getting looks from people who can't hear what I can through my ear buds. "Did he seriously just say that?" That is a question I find myself asking often. I'd recommend this series to anyone who is not offended by the language and or actions of a first class jerk.

Ren started as someone you love to hate. But soon it becomes just love. ❤