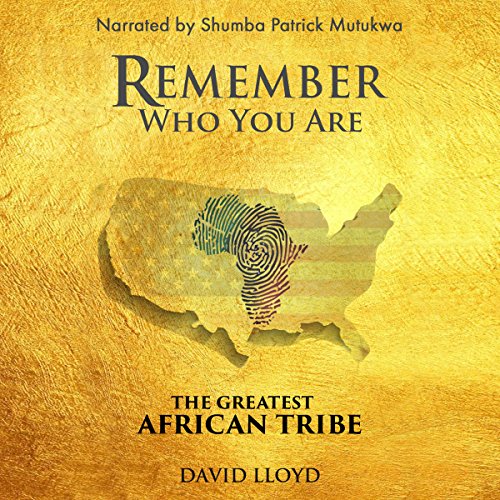 Remember Who You Are: The Greatest African Tribe

Remember Who You Are is the profound awakening of African-American intellectuals as a collective African tribe.

The message centers on African-Americans taking pride in their many cultural and political achievements as arguably “the most influential culture the world has ever seen”. The author, originally from Africa, expounds on the extraordinary culture, appropriately labeling African Americans as “The Greatest African Tribe” based off their African ancestral roots and astonishing accomplishments in spite of numerous racial challenges.

It presents a forward thinking hundred-year vision, advocating for economic freedom rooted in support of Black-owned businesses in the United States and Africa.

It stresses that the respect of African decendants all around the world is directly linked to economics and African continental perception. It campaigns for “absolute respect” achieved through self-love and economic empowerment as being the only true remedy for racial suffering.

What listeners say about Remember Who You Are: The Greatest African Tribe

A must read for anyone interested in gaining understanding of what it means to be black, African or black in America. It fully explores the disconnect between Africans and African Americans and gives an in-depth analysis on how to bridge the gap. Highly recommend for anyone who wants to use his/her African roots to build wealth for generations.

The author speaks from his personal experience having lived on both continents. He gives a much-needed wake-up call to African Americans to remember their triumphs, as they have endured many years of oppression. He politely shows, as if holding a mirror up to Af-Ams that they have their own identity and culture and need not only identify with their ancient African roots. The African American tribe may stand on its own and if they can only forget the White Man's programming they will embody their greatness with sovereignty. Motivational & Inspiring!

Interesting perspective of someone with both native African and African American roots. The author makes a compelling case that African Americans may very well be the greatest African “tribe” considering every they have gone through over the last 500 years. He correctly states that AA need to connect economically with the motherland. And asks a very serious question? Where will Africa (plus other black peoples) and African Americans be in 100 years. My biggest criticism is it is a bit too simplistic and he did not discuss the impact of religion in the continued exploitation and brainwashing of the African American and African communities alike. Still it is well worth the read and I would recommend it.

The author draws you in with the story of his life and his experiences. Narrator's voice is captivating! After you listen to this book you will want to go, seek, and conquer!