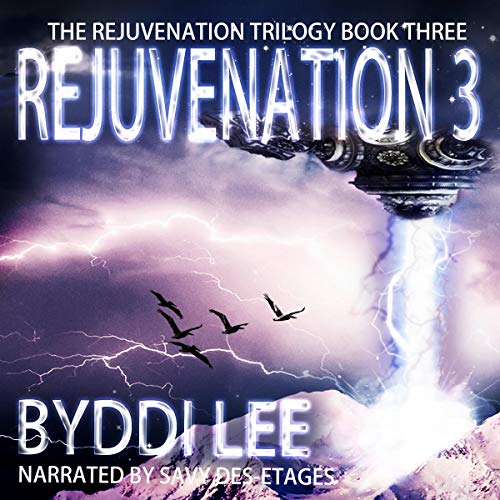 Out of a clear, blue sky, a mysterious alien race wreaked havoc on planet Earth, thus beginning the Melter War.

Alien energy weapons struck the Polar ice caps. Oceans rose, drowned huge swathes of land, swallowed up great cities and left much of the earth as an irradiated wasteland.

But a savior emerged; Lisette Fox and her Belus Corporation supplied the weapons and technology to defeat the Melters and brought peace back to the world.

Some two decades later, Bobbie Chan, a child at the outbreak of war, now works as a doctor caring for the ultra-elderly. Bobbie encounters a previously unidentified disease, Rejuvenation, which makes the old young, but has homicidal side effects.

In this gripping final installment of Byddi Lee’s Rejuvenation trilogy, Bobbie discovers the shocking truth behind the Melter’s attack and Rejuvenation. Bobbie faces a decision with untold consequences, not only for Bobbie, but for the entire human race.

What listeners say about Rejuvenation Book 3

The best book in the trilogy

Good final book, I enjoyed it. Lots of action and unlike the other books in this trilogy the storyline wasn't so predictable which was great. It was sad what happened to some of the characters, but a good ending. The narrator's accents went a bit weird in this book though which was a bit distracting. But overall a recommended read.

I was given a copy of this book for free of my own choosing and have voluntarily left this review.