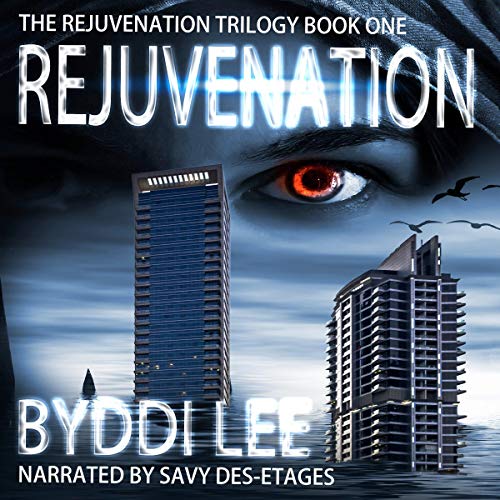 The Melter War has left the Earth's surface devastated, leaving humanity to survive on what little land is left between the Scorch Zones and the rising oceans, where towering subscrapers dot the dystopian shore lines.

Bobbie Chan is a doctor caring for the ultra-elderly in one such subscraper when she notices a mysterious new disease afflicting her patients; some show signs of age reversal before a catastrophic, and often fatal, cardiac arrest strikes.

Bobbie begins to wonder if she is witnessing a bio weapon in full force. A Melter attack? Are they destined to finish the war they started?

Belus Corp, the "savior" of humanity during the Melter War, whisk the afflicted away, including Bobbie's grandmother. But Bobbie is terrified. The "Rejuvenees" are getting younger, but they are also becoming increasingly aggressive, uncontrollably so.

Bobbie begins a race against time to rescue the Rejuvenees and uncover their true enemy.

What listeners say about Rejuvenation, Book 1

This reminds me of the film 'Cocoon' with elderly people mysteriously and physically becoming younger in age, but with a dangerous twist. Not a bad story but it's not so hard to predict where the story is going. I found it to be a very slow build with a little action right at the end. It was just ok.

I was given a copy of this book for free of my own choosing and have voluntarily left this review.

Bobby's twin sister had long ago died of an aging disease, then her father and grandfather were killed in the molten wars which destroyed great swathes of the world's surface as we?l as billions of the lopulation. Now she was a doctor, primarily treating the elderly, who were mostly deemed unproductive and expendable especially since life expectancy had been raised well above 100. Then something strange began to happen. Some of the more ancient of the patients began to lose their aches and pains, apparently growing physically younger before sudden death from heart attack. But a few did not die...

An intriguing tale, well and simply told, not overloaded with medical or technical jargon, and with a lead character who is both believable and reasonably well developed. Narration by Savy Des-Etages is also good, her well modulated voice clear with a fairly crisp English accent and pleasant to the ear, although being set in Ireland, an Irish accent would have been more expected. But given that this is an universal story, it really does not intrude. Her character voices are also distinct and differentiated.

An enjoyable story, the first in a trilogy, which is suitable for all ages with just a little light sexual banter. My thanks to the rights holder of Rejuvination, who, at my request freely gifted me with a complimentary copy via Audiobook Boom. It does raise interesting questions for the reader to ponder, also, I look forward to book two.

Something that could be real in the future, makes it slightly more thought provoking.

Very easily slipped into the book, so much I listened to completely on my day off.

Hoping a follow up is out, so I can listen to now.! Will be putting the author on my tbr list.

I did receive the book for free, and the above is my unbiased review.

This is the first book I have read/listened to by this author and I look forward to the second book. One part of the science near the end of the book didn’t seem realistic, but otherwise most of it was. The society’s technological advances are intriguing, as is the reverse aging. The Melters are a gap in the story I’d love filled. In it seems to be a whole other book needing to be written. It almost feels like this should be book two instead of book one. I am very curious where the story is going.——-

This is the first book I have listened to by this narrator ( Savy Des-Etages ). She did very well with different accents/ voices for the different characters. She added emotion and personality to the character portrayals and and read the narrative parts so it felt I was watching the story happen. ——-

There are no explicit sex scenes, excessive violence, there is swearing. ——-

This is a very futuristic dystopian book. The world is ruled and controlled by corporation Belus Corp. Dr. Bobbie Chan is a Geriatrician and finds the elders appear to be physically rejuvenating, but finds it is a virus where their eyes change as well as their personality. It is very complex but enjoyed the characters of Bobbie, Grannie and Joy disliked Bobbie’s fiancé. Recommend if you enjoy futuristic medical thriller. I was given this free review copy audiobook at my request and have voluntarily left this review. Thank you