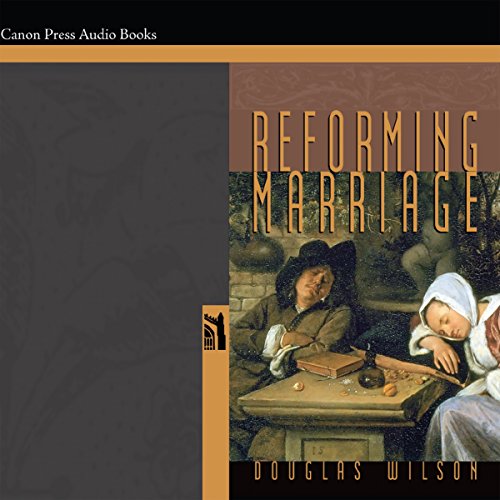 How would you describe the spiritual aroma of your home? The source of this aroma is the relationship between husband and wife. Many can fake an attempt at keeping God's standards in some external way. What we cannot fake is the resulting, distinctive aroma of pleasure to God.

Reforming Marriage does what few books on marriage do today: it provides biblical advice. Whether it has to do with respect and love, confession of sin, sexual fidelity, or even the gnarly issues of divorce and remarriage, Douglas Wilson points to the need for obedient hearts on the part of both husbands and wives.

This audiobook is part of the Canon Press series of books on the family, which has helped many people trying to deal with the on-the-ground messes that come with sinners living under the same roof. Godly marriages proceed from obedient hearts, and the greatest desire of an obedient heart is the glory of God.

What listeners say about Reforming Marriage

The book is fantastic and would highly recommend. however, the audio quality leaves something to be desired but does not, by any means, make it unintelligible.

Excellent in truth and strengthing encouragement!

The foundational content and clear examples help guide the not yet married, married and those who would offer biblical counsel.

Doug is a boss!

Gold all the way through. If you need to enjoy your marriage this book is for you.

I just listened to it, and I think I’m going to listen to it again. Plus I have now bought the book so that I can go back and look at the pages. I think he might’ve just punched me in the mouth... in a good way of course.

End of chapter two is missing. Brilliant book though! My single favorite book on Marriage

My favorite book on Marriage period! Get this book and take its message to heart.