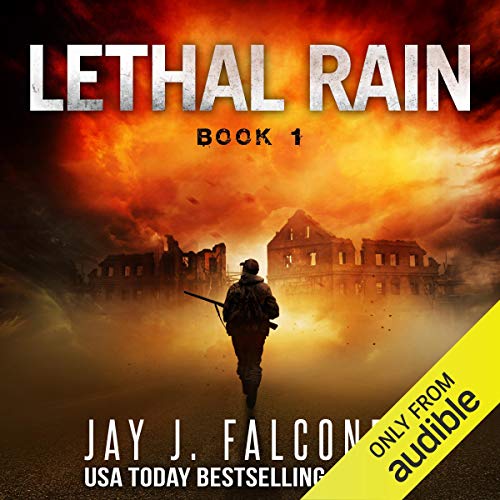 Society will collapse in days...and that's the good news.

Former special ops and survivalist Simon Redfall has lost everything: his wife, his fortune, and his future. Despite being hunted by angry mobs and his own bankrupt government, Simon arrives in Washington, DC, to attend the first ever pay-per-view execution of someone he loves.

Then red storm clouds appear and begin to spread their potentially toxic rain across the planet. The mysterious weather phenomenon grounds all travelers, knocks out communications, and threatens to take down the grid, sending civilization back to the Stone Age.

As society tumbles into chaos, Simon joins a group of like-minded preppers to unlock the secrets behind a terrifying global conspiracy. What he and his band of freedom fighters soon learn will put their lives - and the lives of everyone else on the planet - at risk.

For humanity, time is running out.... When the red rain stops falling, it will be too late to stop what's coming next.

Another USA end of the world tale, easy read but nothinh new.
felt that this was not a complete book,

Redfall is the first installment of what should be a great new series. I am a big fan of the apocalypse/society breakdown/zombie stories, and this fits right into that genre. The story takes place in a future where the world has transformed into a more dangerous place. Government corruption and additional controls are working to clamp down freedom in this new world.
Jay Falconer did a wonderful job painting the picture in this future landscape. He gives a great twist to future society without going off the deep end and making it completely evil and dark. The plot of book one revolves around some new technology that is unleashed, and Jay does good job explaining it in a believable way.
The characters are well developed and behave in a very believable manner.

Gary Tiedmann (Narrator) does a very solid job. I enjoyed the way he changed his pitch and tone between characters so that you easily understand who is speaking.
Overall I really enjoyed this book and am excited to listen to book 2.

This is a very interesting book and it is hard to describe. It's hard to classify this book because I could almost see a lot of these things happening from this book - like public executions on pay-per-view. If you like adventure, conspiracy, special-ops, mystery, and so on, this book may be your book. I honestly had difficulty pausing and going to sleep. This is a very good start to a series and if the other ones are even half as good, they would be worth listening to the end.

This audiobook was provided by the author, narrator, or publisher at no cost in exchange for an unbiased review courtesy of Audiobook Blast. However, the book is actually better than the introduction and I loved listening to it.

Nothing Predictable About This Book

I really liked this book.The author created a unique world and cause for the collapse of society.I appreciate when an author provides flawed characters trying to survive in a untenable world.I have read a lot of predictable apocalyptic fiction and was quite pleased that the author has something unique to add to the genre.The book ends with a bit of a cliffhanger which i expect with a series. Gary Tiedemann did a great job narrating the book and has a pleasant voice,which is really important when listing to an audiobook for hours.I plan on keeping this author on my radar and finishing the series.I received a copy of this book from the author in exchange for an honest review.

I could not put my phone down. Amazing Story start to finish. Can't wait to start the next book

The curtain opens on Simon Redfall's wife's execution. She was found guilty of committing a terrorist act by gunning down a dozen or so scientists and families. The execution was a pay-per-view media circus. Upon completion Simon tries to slip away, but is recognized, chased down, and beaten. Simon's rescuer, a young female who leads a group of idealistic preppers and has been tailing him, appears from the shadows and gets him to safety. It is at this time that the blood red rain begins to fall. The story proceeds from this point with Simon being accepted into the group, it's mission to determine the origin and purpose of the red rain and identify the person(s) behind it. I'm looking to book two "Freedom Fighters" to fill in missing info that might have/should have been included here. Three.point.five (purchased 4/10/2016)

First I need to say wow! This book is pure action from the first word. It is smart too. By this I mean that every character is knowledgeable & intelligent. I'm not use to that. So many authors dumb down their characters or make you feel like they think their readers are stupid. This is not one of those books. I'm amazed at the about of research done &/or general knowledge the author has of just about everything. This story ends with one hell of a cliffhanger. I'm ready for the next one.
I want more.... More back story....more current story. I really want to know if the wife of Redfall is actually guilty. How will he deal with his guilt & sorrow if she is innocent?
The characters are well fleshed out & intriguing. Ian hooked.


This audiobook was provided by the author, narrator, or publisher at no cost in exchange for an unbiased review courtesy of Audiobook Blast.

I really started getting into this book and then...BAM..."To be continued!"

Book one seems to be focused on tandem timeline storytelling and follows several different characters as it establishes the basic plot of the story. There are definitely some early action scenes and and they are written very well to convey a sense of drama and frenzy. Got my adrenaline pumping in a few spots. I like that we started to really get to know Redfall. I really felt for the guy and hope that he's the hero that he appears he'll be in this series.

The setting is in the not too distant future, and the situations described by the author seem plausible. The writing was very good and descriptive. The dialogue was well done. I really liked the flow of this book.

The narration was also well done. The voices of the different characters were distinct. Dialogue was done smooth and well with good emphasis and modulation, bringing the voices to life.

I'm looking forward to reading the next book in the series!

This book was awesome!!! I absolutely devoured it.

We start with seeing Simon Redfall at his wife's execution. She is being put to death for terrorism. He is in disguise so no one knows who he is. The execution is a major event that has the feel f a carnival! It's also televised. Simons wife maintains her innocence right up to the end, and Simon suffers through it, never quite believing she did what she is accused of, but also wondering how is she innocent? He tries to leave quietly but is recognised by a reporter, angry people turn and start chasing him. He runs but is trapped when suddenly red rain starts falling, the crowd is distracted when a van with some kids come and save him. What follows is a plot of mystery, intrigue subterfuge and the lengths people go to to win.

Character wise, this has a lot of different ones but they were all well written and developed. I particularly liked the group of youths that have the compound in the Amish country called Pandora. It's refreshing to have a book that has young people as preppers and not just the adults. These kids are also incredibly smart and capable. They know there's a conspiracy afoot and are willing to do what's needed to uncover the truth, the first being finding Simon Redfall!!

The author has definitely captured my attention with this book. It sets the scene for what seems to be an amazing series. He has created a unique an addictive book and one that will bring you on a roller coaster, edge of your seat ride! One thing though, be warned that this ends in a major cliff hanger, not even a cliff hanger per say, it kinda just ... ends! We are warned about it at the start, but it still feels abrupt. Yet despite me not liking cliff hangers, I didn't mind this because it has made me want book 2 even more. I've become invested in this story and can't wait to see where it goes.

This is the first book I've listened to being read by Gary Tiedemann and it won't be the last. He was so easy to listen to and really brought the story to life. He had plenty of distinct tones for each character and knew when to bring the extra tenseness needed to make it thoroughly enjoyable.

*I received a copy of this for review. This inn no way affected my thoughts.*

This book is good look at a dystopian future. The author does a fantastic job explaining new technology while referencing our current technology, and explaining how we got there. This book will also target your inner conspiracy theorist. A few of our current conspiracy theories end up coming true in the book. I really enjoyed hearing the author explain all this, because he does it in a plausible way. The author also spends a lot of time building up a lot of questions in several different story arcs, and it will be interesting to see how it all comes together. My biggest complaint is that the author leaves you hanging by not answering any of the questions. That’s to be expected since it’s the first book in a series. The narrator, Gary Tiedemann, does a fantastic job with this book. He does distinct voices for all the characters, and I enjoyed all the voices he used. Overall, it was a good book and definitely worth a listen, and hopefully I’ll start getting answers in book two. If book two is as good as the first one, this could end up being a great series.

This audiobook was provided by the narrator at no cost in exchange for an unbiased review.

What did you love best about Redfall: Fight for Survival?

Overall this is more than your average post-apocalyptic book, and I’m really glad that it was

All. I enjoyed the way he changed his pitch and tone between characters so that you easily understand who is speaking