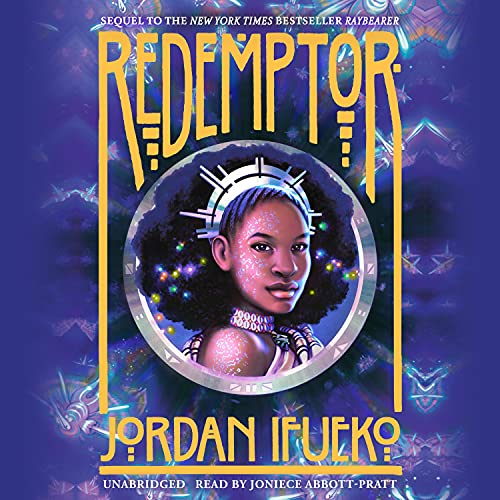 The hotly anticipated sequel to the instant New York Times best-selling YA fantasy about Tarisai’s quest to change her fate.

For the first time, an Empress Redemptor sits on Aritsar’s throne. To appease the sinister spirits of the dead, Tarisai must now anoint a council of her own, coming into her full power as a Raybearer. She must then descend into the Underworld, a sacrifice to end all future atrocities.

Tarisai is determined to survive. Or at least, that’s what she tells her increasingly distant circle of friends. Months into her shaky reign as empress, child spirits haunt her, demanding that she pay for past sins of the empire.

With the lives of her loved ones on the line, assassination attempts from unknown quarters, and a handsome new stranger she can’t quite trust, Tarisai fears the pressure may consume her. But in this finale to the Raybearer duology, Tarisai must learn whether to die for justice...or to live for it.

What listeners say about Redemptor

wonderful ending to a great duology

This book is handles a lot of heavy topics in such a rich new manner. I wish I had read it when I was younger. It's moved me on a deep level.

I loved it just as much as the 1st one. I couldn't stop listening.

Loved this book. There was a lot of singing but I enjoyed it. I do wish we got to find out what happened in their future. I was looking forward to their love lives but I guess they were happy with who they were with.

I adore this story!

First I love that such a vast story was told in just two books and wasn't drug out. Such a satisfying conclusion. Author was perfect for this book!!! For me she brought the story to life with her emotions. Good pacing and kept me entertained throughout. I felt the perfect push and pull of frustration and admiration for the main character. I can't wait to see what else this author comes up with cause I will definitely be reading or listening.

With everything going on in the world, this book gives you strength to continue on, peace being the ultimate prize.

I fell in love with the first book and even though this was the continuation it felt like an amazing stand alone book. The very adult situations that the main character faced was vastly different from the first novel. I felt like I was on the edge of my seat the entire time. Every time the actress depicted the songs about their history I got teary eyed even when I didn’t fully understand what they meant. This book and it’s previous one spoke to my heart and soul on an Ancestral level. I was happy that this wasn’t another book about empty sacrifice and being a martyr. That would have made me very sad and disappointed. However the end solved a lot of problems and broke generational curses and I was absolutely here for it. I can’t wait to hear more from this author and especially from this voice actor. She was brilliant in her delivery.

Tarisai emerges from the nightmare of the new agreement with the underworld exerting her will on current events. She fails miserably and her confidence plummets. Once sustained by her council siblings, she begins to pull away. Voices and visions of long-dead redemptor children are never far from her. Perhaps she is mad. I recommend this imaginative, frustrating, illuminating, soaring tale to anyone who’s felt invisible or overlooked, exploited or trampled and to those who care enough to act on their behalf.

This author has produced another fantastic book! I loved it! It was entertaining and thoughtful.

best story ive ever read.ever.in my. entire life. read it and your welcome love

Everything I wanted in a story.

I thoroughly enjoyed these books from start to finish. I wish we could visit the worlds we read. But this was the very next best thing. 💕