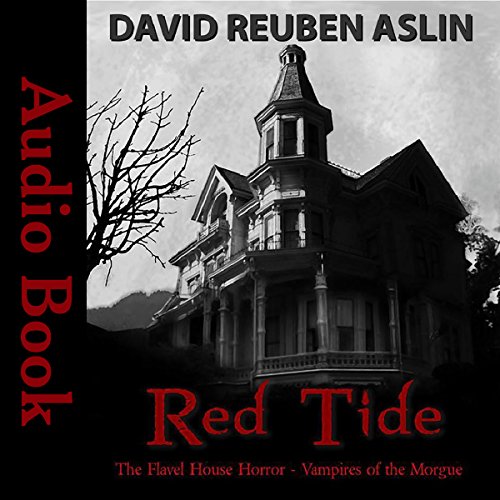 Red Tide - Vampires of the Morgue: The Flavel House Horror

Red Tide - Vampires of the Morgue: The Flavel House Horror

Paranormal Investigator Ian McDermott has come to the small coastal river city of Astoria, Oregon, to investigate a rash of recent slayings, that in their wake, have left the banks of the Columbia River littered with horrifically mutilated, completely exsanguinated rotting corpses.

Ian, along with his four-legged friend, Scout, and his financial benefactor's niece, Zoey, finds himself in way beyond his depth, caught up in an unimaginable web of extreme danger, malevolent evil, and demonic deceit in this terrifying tale that will leave you breathless at every twist and turn; as you dive deep into the cold hellish abyss that is...Red Tide - The Flavel House Horror: Vampires of the Morgue.

What listeners say about Red Tide - Vampires of the Morgue: The Flavel House Horror

Would you consider the audio edition of Red Tide - Vampires of the Morgue: The Flavel House Horror to be better than the print version?

This is not my usual forte. That being said I found the book entertaining, and very fun to listen too. The Narrator reads it perfectly. I am looking forward to book three!

I was so looking forward to this as I absolutely adored book 1, but to be honest, it's a bit of a let down!

This time we see Ian in Astoria, Oregon. He is investigating the grizzly murders that are leaving people mutilated and drained of blood. He has an idea of what may be causing the murders, and after what happened in book 1, he now knows that the things that go bump in the night are real, but how can he find the Vampires and stop them? Just what lore is real and what is not?

As I said, I loved book 1 and was really looking forward to this. I eagerly started it but for about half to nearly three quarters of the book, I found my attention wandering. I didn't think it was as fast paced as I was hoping, and the dialogue between the characters became quite annoying! It seemed like they had to say the persons name, whom they were talking to, multiple times during their talk. It was repetitive and very very tedious. About half way through I was going to put it aside for later but I persevered as I wanted to see what would happen.

Now it wasn't all bad. The characters were all well developed. Ian was as awesome as always and along with Scout, his trusty dog, they make a great team. In this one, they meet a prolific writer and his niece and I enjoyed the twist the author put on for them. I also enjoyed the Vampire lore and mythology., it showed that the author did his research well. I enjoyed the club they were investigating but did think the author could of made the villain a little more mysterious. We know kind of from the start that it's Vladimir Drago Salizzar that is the vamp, but I wished we had a bit more suspense before finding this out.

In all, it's a good read and has me very curious to see where the author takes the story. I still love Ian and definitely want to continue the series but I hope the author can fix the issues with the dialogue because it really has the potential to be a great series.

S.W. Salzman did a great job again with the narration. There wasn't as many sound effects in this as in book 1 but there were still some, and they were all well placed. He had plenty of different tones for the characters and made the book a little more enjoyable.

*I received this for review from the narrator via AudioBook Boom. This in no way affected my thoughts.*

Not really a paranormal investigator

I don't know how i feel about the story. For a paranormal story, we don't see anything paranormal until the end of the book. For a PI story, there's no investigation. In the beginning of the story, Ian decides he needs to go to the Morgue, a distasteful vampire-esque night club. He spends the middle of the story lounging around and flirting with a girl. Then finally at the end he goes to the night club and we reach the climax. On the way, he meets a fiction writer once, who acts as the story's wise-old-man trope. Suddenly the author gives him a lot of money and calls them friends. I don't buy it. Without giving spoilers, I didn't buy the end of the story either for similar reasons. I felt ian really didn't do much for the town as a paranormal investigator. 3/5

As for the narrator, i thought he was fantastic. He was great with the hysterical Sally and older author and radio messages. He uses some sound effects like music, dog barking, and door opening. He didn't convince me he was a sexy 20 year old girl, but to be honest, I'd be a little creeped out if he did. 5/5

This book is about a Paranormal Investigator on the hint for vampires.
this is the first book of the series I have listened to. I was not lost, so these books can be read of out order.
I love Ian! and his puppy dog! they have a lot of fun and bring joy into the book. its a great story, and the S.W really brings it to life!
A good listen!
I was provided this audiobook at no charge by the author, publisher and/or narrator for an unbiased review via Audio Boom..

What was one of the most memorable moments of Red Tide - Vampires of the Morgue: The Flavel House Horror?

The big fight scene at the end. Scared the daylights out of me!

Which character – as performed by S.W. Salzman – was your favorite?

Main character, Ian. He's very down to earth and likable. Ok, love the dog too haha

The ending was very tense.

The book had a lot of unexpected elements that kept you guessing until the end. Overall, it was a very pleasant novel.

this book was given to me at my request for review

I enjoyed listening to this book and was entertained the whole time I was listening. The narrator did a super job.

Our protagonist Ian McDermott is a paranormal investigator. In this tale, Ian is investigating the possible existence of vampires. Bodies drained of blood and some missing internal organs have been showing up in and around Astoria, Oregon. Specifically under suspicion is a new nightclub called The Morgue; tastefully modeled and decorated after a 16th-century castle. The owner, Vladimir Drago Salizzar is a self-proclaimed vampire, which helps attract those of the Gothic and vampiric persuasion. This puts the police and FBI cross-hairs directly on Salizzar. This is the account of Ian’s encounter with the vampires and his narrow escape. It also describes his budding literary partnership with Clayton Collins, the local celebrity author. The characters are great and quite likable. Zoey is the love interest and she added personality to the tale. A good story with excellent narration. I was given this free review copy audiobook at my request and have voluntarily left this review.

I must say I found myself kind of wondering when the vampires were actually going to arrive. This was more of an investigation into weather they exist or not. Of course they do finally show up and in this series they are defiantly the bad guys. I loved the name of the night club. The Morgue was so fitting. I also love how the author wove in how the vampires were supporting themselves. Ian's author friend is quite the character and the things he reveals to him at the end were quite interesting and made the whole story. The narration is nice. I received this book through Audiobook boom in exchange for an honest review.

I really enjoyed this book and the performance! This is an exciting, suspenseful story that is even better by having a dog as a major character! I will be listening to the series!

Hope theres more to this series!

I really enjoyed this book and anxiously await the next! I also enjoy the author and sound effects