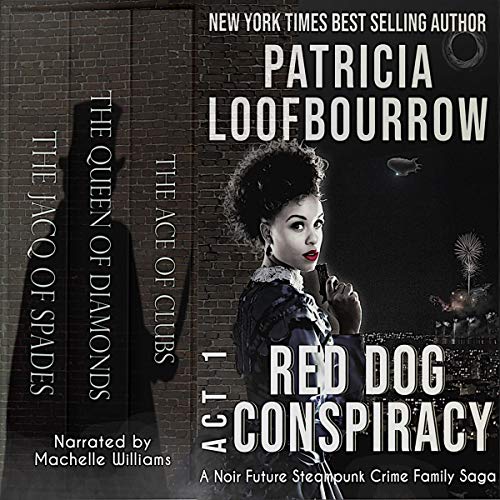 Five hundred years ago, inventor Benjamin Kerr founded the domed neo-Victorian city of Bridges on the barren plains at the center of the former US. After the overthrow of the Kerr dynasty 100 years ago and several decades of street warfare, Bridges is now split between four crime families, who control everything from the courts to the papers. In the midst of crushing social disparity and a failing steam-driven infrastructure, a new faction rises: the Red Dog Gang.

The Red Dog Conspiracy follows the story of 22-year-old private eye Jacqueline Spadros beginning from her first major case: the missing little brother of her best friend, whose murder 10 years before in front of her still haunts her nightmares. The only clue? A Red Dog stamp across the alley from where the boy was last seen.

From the very first moments, Jacqui is dragged into a web of lies, secrets, and betrayals which both endangers her life and the lives of those she loves.

This digital box set comprises Act 1 of a 13-part serial novel. Included in this set:

If made into movies, this set would be rated R for bad language, graphic violence, smoking and alcohol use, child kidnapping, teenagers murdered (a serial killer is on the loose), and sexual content (Jacqui is married, after all).

Order your box set, and begin the adventure! Welcome to the Family.

A Powerful Exploration Of Human Motivations

In setting, this is an interesting story in the spirit of Neverwhere and Palimpsest (or, more recently, Carnival Rowe). In spirit, it's a powerful exploration of the myriad pressures that tug the human soul, seeming to resonate with classical Russian novels in tenor. Melancholy and loyalty. Blood and love. Violence and tenderness. They're all tangled together in this powerful series of stories,
At the center of the story is Jackie, a woman with bottomless resolve, a quick mind, and a heart like a candle flame. She's not so much a heroine as a protagonist: flawed, making mistakes, but never ceasing to strive.
The characters around her are equally powerful and complex, wonderful in their strengths and weaknesses.
This story was one that kept me listening with bated breath. And the reader has done a wonderful job of bringing this disturbing post-apocalyptic clockwork world to burning life.
This is a series to watch.