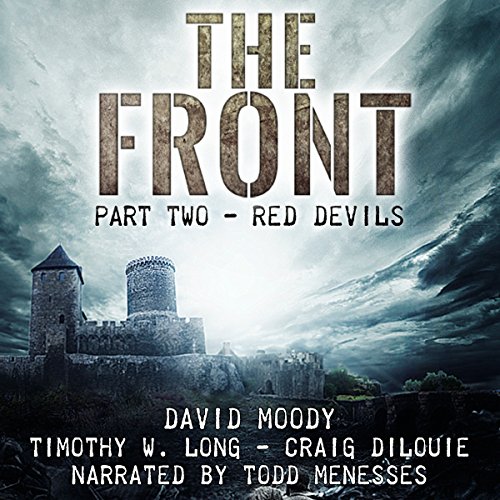 The undead Nazi army continues its march across Europe in the thrilling sequel to Screaming Eagles!

The German stranglehold on the town of Bastogne has been released, only for the living dead to rise up and take their place. A ragtag group of men fight their way out of the chaos and make a frantic escape from the rubble and ruin. One of them, British soldier Lieutenant Robert Wilkins, uncovers crucial information about the source of the zombie scourge. Along with a crack team, Wilkins is dispatched to where the outbreak began - the ominously silent concentration camp at Polonezköy, Poland - to try and find a way to halt the undead advance.

The fate of the entire world rests on the shoulders of just a handful of men.

This is fantastic. if it were a tv show I'd tune in every week. nazzombies!

The first book in this series really drew me in and this book was definitely a continuation of that feeling. The Front Part Two: Red Devils is the continued story of what would happen if, during World War II, the German’s were able to make a “super soldier”, but an unfortunate side effect of making this soldier was that when they died they came back to life as strong and insane killing machines. Super soldier zombies if you will.

The story itself was a little different than the first one (where we find out that they are zombie super soldiers). This one follows a group of soldiers as they are trying to figure out just what to do when you have to kill a Nazi soldier twice.

I liked the interplay between characters and honestly, I liked the way that the authors wrote each character’s reaction to the zombies and having to work alongside Nazi soldiers (sometimes). It made the story interesting and feel a little more dynamic.

Overall, if you’re looking for a good bloody/gory Nazi Zombie story — look no further. The Front Part Two: Red Devils will definitely give you everything you are looking for. Good old American’s kicking butt, Nazi’s being Nazi’s, and Nazi Zombies trying to ruin the day of anyone around them.

Todd Menesses has a really easy to listen to voice and he was able to give different soldiers different voices and was able to throw in some accents to make things interesting. Sometimes accents can really throw you off in an audiobook (because they’re not good or are hard to listen to) but Menesses is really good at them and they do not take away from the book at all. The only dialect that he spoke in that was hard to understand was cockney — and that dialect is hard to understand in general, so it wasn’t a problem from Menesses.

I received a free copy of this book - this has not affected my review in any way.

If you enjoyed this review, please vote for it!

Picks up right where the other one left off

Where does Red Devils rank among all the audiobooks you’ve listened to so far?

I like zombie books and you can't beat Nazi zombies so this one was pretty good for me.

I like that we got a better view into how the virus was created by the Germans and also more of the British view in this one.

Good pacing again like first one, more animated in this one as the story moved a little faster than the first one. Good with the British and German accents all distinct.

Yes, kept waiting for a point to end but also kept wanting to see what would happen next.

Can't wait to see what happens in the next book.