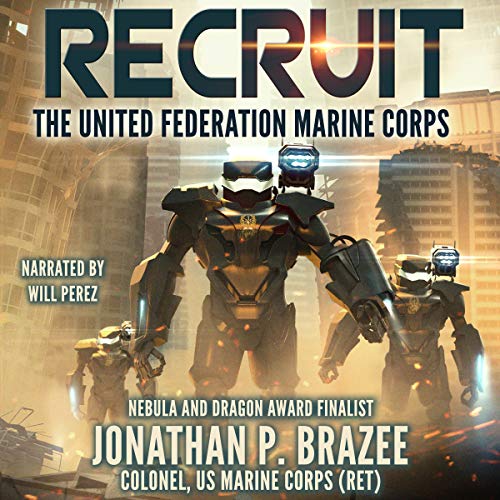 Desperate to escape a life of poverty on his desolate home planet, Ryck Lysander enlists in the United Federation Marine Corps, hoping to make a better future for himself. However, Ryck soon discovers that the Corps is more than a means of escaping his former life as he is pushed beyond the very limits of his strength and willpower.

From bootcamp brawls to skirmishes with galactic pirates, Ryck's new life presents him with unimaginable adventures and forces him to prove his mettle as he forges his new identity and fights to earn his place as one of the Brotherhood of Marines.

What listeners say about Recruit

Too much junk describing but good story

I liked the story and the characters but everything was way over described, way redundant.

The story was weak.....
The narrator was ok, the sound quality was poor. I listen on a late model iPhone with $900+ headphones. Generally, the sound quality is good to great, but from the first 3 minutes I was checking my connection and tried high quality speakers and the sound was just poor.

Started off pretty well and I almost thought this could be another Starship Troopers. Sadly, it turned out to fall apart after the first couple of chapters. It could still have been ok, but for the tidal wave of minute detail about arms and equipment that totally swamped character development and story line. What set Heinlein's classic apart was the deep development of characters. The situations in which they found themselves simply explored their reactions to them and their growth during each challenge. In this book the hardware and the situations are the stars. If you like that, cool. Personally I like to meet and learn to like the central characters in the story. At the end of Starship Troopers I was sad to realize there was no more story. At the end of Brazee's storty, I found myself relieved to be done with it.

He made a horrible book even worse! Way too much was spent by the author on background fluff weak science, not enough action...I could go on, but why bother?