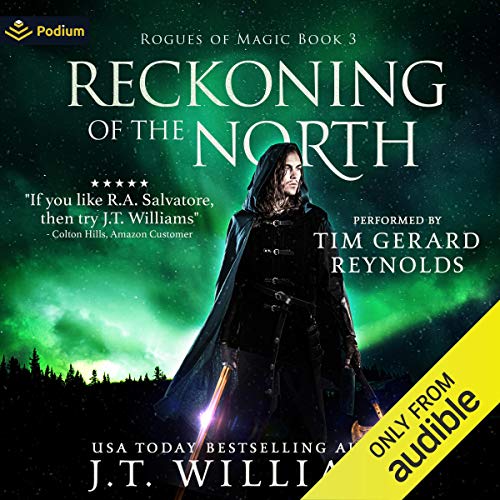 Reckoning of the North

By: J.T. Williams
Narrated by: Tim Gerard Reynolds
Try for £0.00

The world falls towards darkness.

Magic is awakening in the north and the Grand Protectorate retreats after its bloody defeat at Srun. Sviska stands with the Island Nation against the evils of The Order and the Itsu Priest as the allies of magic make plans for their push against the capital city of their enemy. But all is not as it seems.

The Itsu Priest is tightening his grip on the legions of the north changing them from men to unholy beasts. The Saints of Wura must move quickly to save Garoa's daughter from his evil clutches but some fear she could already be dead. Furthermore, hundreds have been kidnapped as sacrifices for a dark ritual and the time for the incantation draws near.

Sviska is moving closer to unlocking the powers of his Dwemhar ancestry but as the blood curse ensnares his mind, he can only pray he is powerful enough to resist the will of The Order.

He made a stand against a dark evil in the icy mountains of Elinathrond but now his life, and that of those he has grown to call friends may be forfeit.

What listeners say about Reckoning of the North

The story had potential and I actually read all 3 even though by the second book I was done. Characters were underdeveloped, arcs were incomplete. There were many hints more significant revelations that were never followed through. Instead the writer spent time with senseless descriptions. Svifka’s power is never revealed. His prophesized greatness falls shorts since it was someone else’s sacrifice and much more. It was a waste of time and money