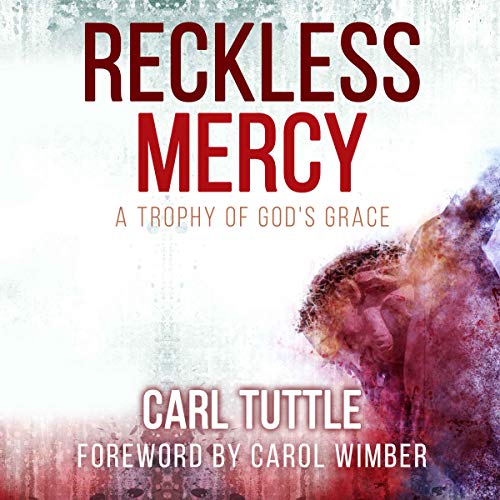 My world came crashing down around me in 1997. It was entirely my fault. While it was an utterly devastating experience, followed by equally devastating years of slow rebuilding, I also realize that it was a beautiful act of God's reckless mercy toward me that brought me to such a place.

At age 11, I walked into a church gathering for the first time and immediately felt the welcoming embrace of a new family of faith that could fill the holes that my natural family could not. Among the many emissaries of God's mercy to me was John Wimber. I was in my early 20s when an accidental revival put a guitar in my hands, song on my lips, and birthed what would eventually become the Vineyard Movement. As I continued to grow in worship abilities, songwriting, and leadership, I also grew in mounting shame. I didn't deserve the recognition I was receiving. I certainly didn't deserve to work alongside John Wimber and participate in the overwhelming grace God was pouring onto the Vineyard. I felt like a fraud, and the only way I knew how to deal with that shame was to mask my insecurity with a veneer of confidence and charisma.

In 1995, when I was asked to take over the role as senior pastor of Anaheim Vineyard, my wife, Sonja, and I somehow deluded ourselves into believing that this tremendous addition of stress would be good for our disintegrating marriage. I convinced myself that being in this position would miraculously relieve me of my shame and I would finally feel at home in my own skin. A sudden onslaught of anxiety attacks proved those hopes to be false. I spiraled downward, at times indulging in unhealthy behaviors to escape the stress. My marriage continued to disintegrate, and eventually Sonja and I divorced.

The narrative I had spent years constructing, the façade of control, shattered into a million pieces. Years of heartbreak, exile, and loneliness followed. Through that painful journey, I discovered that Jesus is enough.

a raw, candid, and transparent story of grace

In Reckless Love, author Carl Tuttle writes “I was a broken little boy who grew up to a broken man.” This book from Tuttle is authored is simply a raw, candid, and transparent story of the way God’s mercy redeems the broken places in our history, the places we hold out from him, and the various hang-ups we have in life. Or, as Carl defines it “God crashed in with His reckless mercy to fashion those broken pieces into something beautiful.”

Some of you will remember me blogging about Reckless Mercy when it was released. In that post, I also shared how Carl Tuttle and I crossed paths. It was a book that I took to reading this book as soon as it was released. This simple read is far from exhaustive but it quickly captivates readers with a humble look both into the early years of the Vineyard Movement and the journey of Carl Tuttle.

If you are not familiar with Carl Tuttle, allow me to offer a brief introduction. Carl became a follower of Jesus in a Southern California Quaker Church during the mid-1960s, as the result of the witness of John Wimber. By the mid-seventies, a small group of spiritual seekers started meeting in the house of Carl Tuttle’s sister. Carl Tuttle quickly became the worship leader of this group, as the group grew under the leadership of John Wimber. Over the next few years, this group would become one of the most important foundations of the Vineyard Movement. Carl Tuttle found himself becoming a worship leader, church planter, and pastor in the movement. Eventually, he would even replace John Wimber as the pastor of the Vineyard Christian Fellowship of Anaheim. In those years, Carl brought much to the church and it’s movement. However, what too many people know was not his ministry, but the ways both pressure and unaddressed brokenness in his life would lead to the fall from ministry. Years later after being exiled from the movement that brought him to faith, God has redeemed his journey and restored his life with his extended church family.

In many ways, readers will witness that Carl’s lifelong journey is exactly what C.S. Lewis writes about in The Problem of Pain; “God allows us to experience the low points of life in order to teach us lessons that we could learn in no other way.” You don’t need to know who Carl is, or what the Vineyard Movement is, to enjoy this story. Every reader will be able to watch how God weaves his mercy into the lives of his followers to redeem their histories, hold-ups, hold-outs, hang-ups, and their afflictions. As I have pointed out before, Reckless Mercy is a contagious, courageous and consistent reminder of God’s deep and compassionate mercy for us, despite our deep brokenness.

This year, the Audible Audiobook was released as a companion to this book. At first, I wondered if an audiobook version could be as good as the book in which I had recommended to many. On a recent trip to Nashville, I hit ‘play’ on this Audible Audiobook I was instantly amazed at the dictation, quality, and emotion of the narrator.

Truthfully, this story in this new audiobook format actually made it feel like a completely different story to me. In each chapter, I found countless aspects of Carl’s confessions and his story sticking out to me that didn’t hit me in the same way when I read the book. Honestly, as the story was read before me, there were several times that I was moved to thundering laughter and yet other times I was moved to tender tears.

Carl’s transparency helps me be honest and open about some of my own ‘stuff.’ In that opening reality, I found the promise that God’s love shows us that “broken shards of a life can be reassembled into a story of love and mercy,” as Carl confesses. This book is more than just a story, it is full of important experiences, doctrine, autobiography, and the history of a movement.

God longs to be present in the lives of his people when they are surrendered. Despite whatever the drama, disgraces, and doubts are that might be inhabiting your life, this book will offer you a firsthand glimpse at the heart of God’s mercy. I suggest you purchase this book on Amazon. Even more, I suggest you also buy it and listen to it on Audible Audiobook.