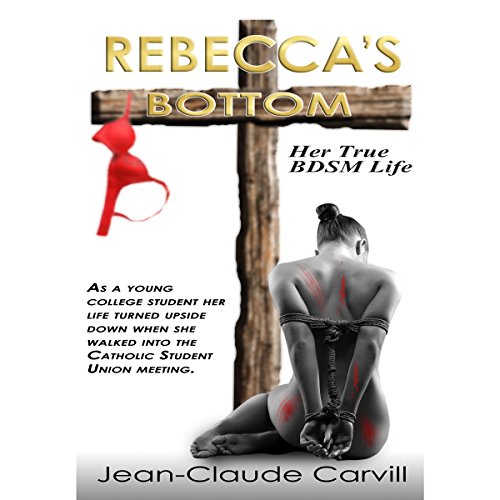 As a young college student, her life turned upside down when she walked into the Catholic Student Union meeting.

David was handsome and charming, but he had a secret. As he starts to reveal a world of forbidden pleasures to Rebecca, she is captivated by its fantasy.

Catapulted onto a deviant path full of surprisingly honorable and mannerly people, Rebecca is forced to confront the fact that the world at large is much less structured and respectable than that of the secret underground. Through the juxtaposition of her encounters with kinksters and vanilla individuals, Rebecca finds herself being jaded by the "normal" crowd and unexpectedly gaining freedom and security in sadomasochism.

With this newly found world, Rebecca's paradigm begins shifting in new and exciting ways. Above all, she struggles to free herself from the constraints that she has allowed others to put on her and become what she has always wanted to be: naughty.

This took some wrong turns.

They were so bad an addition that after the first two I got fed up with them and forward winded from about a third through the third letter and all of the fourth.

Also, the first third of the book was very slow in my opinion and was rather dull to listen to.

Have you listened to any of Marie Hélène’s other performances? How does this one compare?

Only one of hers I've heard I think, but she got the job done and was good to listen to.

If the movie cut some of the junk and so on then maybe I'd rent it to watch.

I also will say the best scene in the book for me was Rebecca's first one with Baby. It's a good combination of sweet and hot.

Not at all, just not a very interesting or engrossing story.

Who would you have cast as narrator instead of Marie Hélène?

I would absolutely listen to this program again because I enjoyed the dynamic plot and I liked the characters.

The sex scenes were really memorable because they were really descriptive leaving nothing to the imagination.

I haven't listened to any of her other performances before, but I enjoyed this one so much that I will look into more of her work.

I was moved by Rebecca's strong personality and her ability to try new and different things.

They were all top notch scenes that I really enjoyed.

Loved this audio book and would recommend to others.

Not your usual mindless sex games

Woth The Time TO Say The Least

If you’ve listened to books by Jean-Claude Carvill before, how does this one compare?

No, But I plan to

half the book is a nice story

story would be better if half the book wasn't 20 minute definitions of the bsdm lifestyle. The end is excellent.

That is an wonderful and interesting audio book. I always enjoy this audio book when I listen it.

I never read any book such this one. So you will enjoy this book so much.

I should not compare with any other books because this is the best book for me.

I always want to listen full books because it's so enjoyable book for everyone.

Highly recommended for you!

I personally prefer the audio version of this book because of the seductive voice of Marie Hélène and I can just listen to audio from my device while on trip and so on.

The story line was captivating and I love erotica book but this book was WOW!!!!!!!!!

This audiobook is in the adult options, so I would say it is a different type of book, but I would rank it in to top audiobooks I have listened to.

I cannot compare as this one is very differnt in a good way.

It kept my attention

This audio book is very seductive and descriptive. Rebecca and David are great characters in this audio, it was sexy, and made you want to continue listening as to not miss anything. Very good.