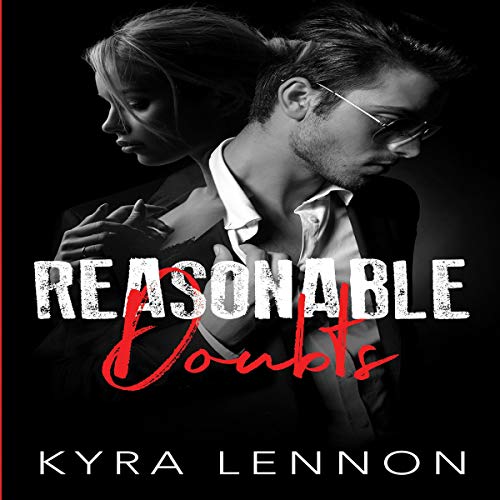 Darcy Ryan is a woman on a mission. A mission to take down the corrupt cops who ensured her best friend, Matteo Torres, went to jail for a crime he didn’t commit.

Darcy is willing to do just about anything to prove his innocence, including getting up close and personal with lead detective Finn Drake.

She knows she’s playing a dangerous game, but it gets more dangerous than she could have ever imagined when she discovers everything she thought she knew about Rebecca Torres was wrong, and Finn Drake isn’t the man she thought he was either.

Darcy’s life and her best friend’s freedom are on the line. With her entire world turned on its head and time running out, she has to decide. Should she take a chance on Drake and go against her gut instincts, or go it alone and pray she can find the killer before he finds her?

What listeners say about Reasonable Doubts

A murder mystery. I really enjoyed it and was filled with anticipation as the plot progressed, I wanted to know who had framed Darcy's best friend as much as she did.

​
Matteo Torres was convicted or murdering his wife, he's innocent but all the evidence is pointed to the scorned husband and his best friend Darcy vows to prove his innocence and in doing so is prepared to put her life on the line by trying to get close to one of the investigators on the case who she thinks is corrupt and had a hand in putting her friend behind bars.

From the moment Darcy sets off on her miss Marple investigation journey, even her relationship with the Detective Finn takes a surprising turn and the hero becomes someone she believed to be the villain but who did it?.

Reasonable doubts is a gripping story full of twists and turns, Its a page turner with an unpredictable plot.

I listened to Reasonable Doubts in audio and I have to say this is the first audio I have listened to where the whole book is narrated by a man. I liked it. The narrator didn't try and make himself sound like a woman with Darcy's pov which can be annoying when a male narrator does that but he softened his tone.

TRYING TO HELP HER FRIEND DARCY IS WILLING TO DO ALMOST ANYTHING, EVEN BEFRIEND THE DETECTIVE FINN WHO SHE BELIEVES PLAYED A PART IN THE CRIME. A GREAT STORY OF NOT ALL IS AT IS SEEMS. A WELL WRITTEN BOOK THAT HAS THE READER GRIPPED.

This story is great and I like the narrator

Reasonable Doubts is my favourite Kyra Lennon book to date.
I've had the paperback for a few weeks and let me tell you I was sitting on a treat. I actually listened to this book, rather than read it. My first audiobook and it totally added to the experience.

Darcy wants to right a wrong. Her best friend is in jail for a crime he didn't commit. She's determined to find a way to get him out. All she has to do is work out how the cops got the wrong man. Her plan isn't stellar but it's worth a shot. Showing a man a bit of attention could open the door to a corrupt system. The problem is she has underestimated Finn.

Darcy is a beautiful woman and any man would be a fool to not notice her. Finn likes to think he's a good cop. He puts in the hours and wants to find the bad guys. When Darcy enters his space he cannot help himself. A taste of a woman like that could set his soul on fire. She's playing a dangerous game.

Two people both with a rough past want to undercover the truth and may just find something else along the way.

It's simple I Loved it! Henry Gray had the perfect voice for the beautifully crafted book. It's high praise from me. I liked both leading characters and the story had me hooked to the last sentence.

I am an avid audiobook reader, listening to hundreds of books a year, so I am critical of narrators since they can make or break when a great book goes to audio. I prefer books with multiple narrators, so there is less chance of character voice confusion, and voices that are 'easy on the ears'. The narrators in this book has a great voice for male characters, but I did not care for the female one. It just wasn't 'female enough' for me. That said, his voice overall was very easy on the ears and the story itself was enough to keep me listening, and I say that very seldom since I am one that will return a book because of a bad narrator.

Next is the story. I am not one to give a lot of specific story details since I feel you should read the story for that, and in this case, you won't be disappointed. This book has great characters that you want to keep listening to see how they develop. The storyline was captivating and kept me guessing, which also doesn't happen very often. I am looking forward to listening to more of her books!

I received a free review copy of this audiobook and am voluntarily leaving a review.

This is my first listen for both the author and narrator. This author wrote a story that will grab your attention, it’s full of faith for you to have for a new person. It is fast pace full of action and mystery .
Heroine is Darcy.
Darcy wonders how Matteo was convicted for a crime he didn’t commit and landed in jail . The crime is murder , murdering his wife . Darcy has a plan , cosy up to the policeman that put Matteo in jail. Finn is the policeman that arrested Matteo . Darcy needs to get cosy with Fin and see how he got the evidence. Fin is a dirty cop , so why did he want to see Matteo in jail .

Henry Gray voice is strong , smooth and clear. First time I heard him

this was an excellent book

I totally enjoyed reading this book. It’s well written and the characters were fantastic. I would suggest this book to my friends that like this sort of genera.