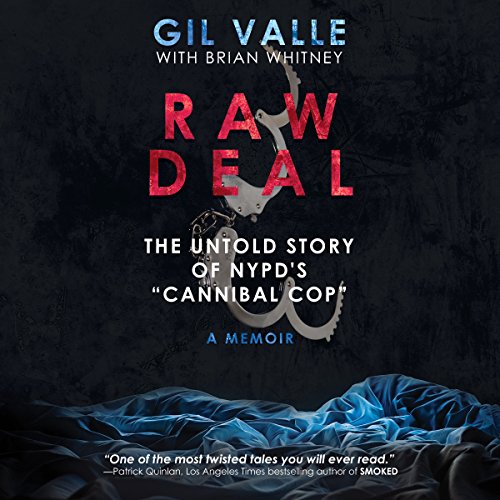 By: Gil Valle,Brian Whitney
Narrated by: Gregg Rizzo
Try for £0.00

"When, if ever, does a thought cross the line and become a crime?"

Raw Deal is the untold story of former New York City police officer Gil Valle, who in 2012 became known throughout the world as "The Cannibal Cop." It is the controversial saga of a man who was imprisoned for "thought crimes", and a look into a world of dark sexuality and violence that most listeners don't know exists, except maybe in their nightmares.

After Valle's arrest, media coverage exploded in a frenzy of lurid tabloid headlines and stories about the cop charged with planning to kidnap, torture, rape...and eat...women, including his own wife. But here's the fascinating part: There was no such plan in reality. Valle was simply engaging in his own private fantasies, albeit fantasies that are abhorrent and grotesque, and for that he was thrown into prison. Valle faced life in prison for his charges, and served 21 months for nothing more than having online chats about his fantasies. He was finally exonerated of all charges.

Raw Deal raises the question: When does thought become a crime? It will challenge the listener's beliefs about free speech, the right to privacy, and government's role in watching over us.

Warning: This audiobook contains graphic fantasy material of a sexual and violent nature. It is intended for mature audiences.

What listeners say about Raw Deal: The Untold Story of NYPD's 'Cannibal Cop'

The Questions We Must All Ask Ourselves

No matter how disturbing we may think a person's thoughts are, they are not a crime in the absence of action. Beyond the tragedy suffered by Mr. Valle, the blatant misconduct of those responsible for his suffering is a serious threat to our justice system, and ultimately a threat to every innocent person that may ever be accused of a crime.

Couldn't Understand Narrator, So Who Knows.

Narrator mumbles and doesn't enunciate well. It's very frustrating to listen to. I've never had to slow a book down before, and I'm really struggling to catch the story.

What a shame that a person’s thoughts can get you into so much trouble. This trial was pre- Christian Grey otherwise hoping this never would have happened, but who knows. Great story, but so sad. Thank you Gil for sharing. I’m on your side.

One of the Very Best

Well written, great narration, and a stunning look into broken aspects of our justice system.
This book shows what can happen when hysteria, and over zealous law enforcement and prosecutors, turn away from the rules and turn to persecution of innocent people in order to railroad someone just to get that all important conviction , so they can be re-elected or rewarded for "success"