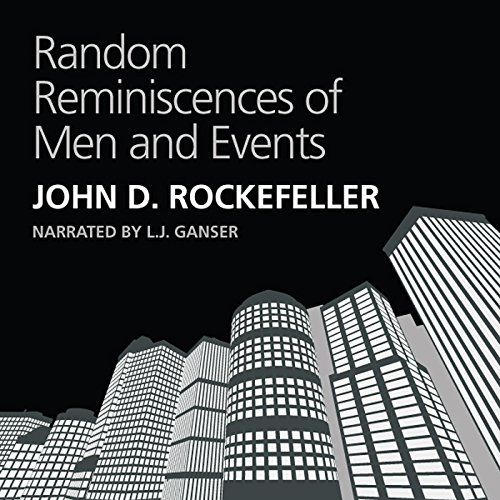 Random Reminiscences of Men and Events

Posh American icon John D. Rockefeller gifts his audience with aristocratic and erudite prose. Rockefeller invented the modern petroleum industry, and he set the template for philanthropy in America. Of course Rockefeller met the most interesting people possible in a variety of exciting contexts. And what he learned of and from fueled his gigantic philanthropic acts. Rockefeller does not quibble or deal in ambiguities, he knows much and he shares his knowledge with authority. L. J. Ganser narrates in a brisk, busy manner, making listeners feel as if they are overhearing Rockefeller holding forth among swanky cohorts. Like Rockefeller, Ganser sounds engrossed in what he is discussing. Ganser so convincingly channels Rockefeller that listeners will want to find recordings of Rockefeller and hear them for comparison.

"Probably in the life of everyone there comes a time when he is inclined to go over again the events, great and small, which have made up the incidents of his work and pleasure, and I am tempted to become a garrulous old man, and tell some stories of men and things which have happened in an active life.

"In some measure I have been associated with the most interesting people our country has produced, especially in business - men who have helped largely to build up the commerce of the United States, and who have made known its products all over the world. These incidents which come to my mind to speak of seemed vitally important to me when they happened, and they still stand out distinctly in my memory.

"Just how far any one is justified in keeping what he regards as his own private affairs from the public, or in defending himself from attacks, is a mooted point. If one talks about one's experiences, there is a natural temptation to charge one with traveling the easy road to egotism; if one keeps silence, the inference of wrong-doing is sometimes even more difficult to meet, as it would then be said that there is no valid defence to be offered."

What listeners say about Random Reminiscences of Men and Events

This book was very good. Let's you know the what really happened. And how Rockefeller really was. Instead of how the new generation has painted him out to be a villain. And also vintage words from how life used to be back in the old days.