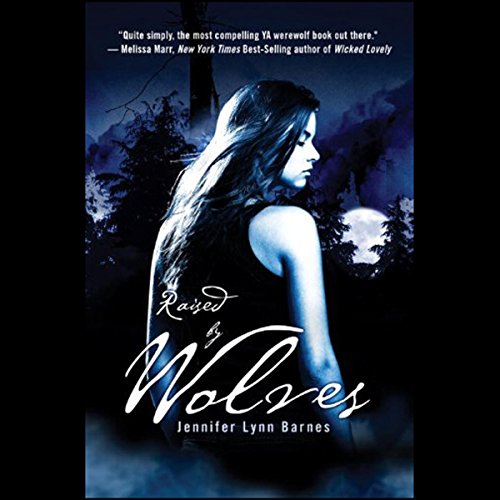 Adopted by the Alpha of a werewolf pack after a rogue wolf brutally killed her parents right before her eyes, 15-year-old Bryn knows only pack life, and the rigid social hierarchy that controls it. That doesn't mean that she's averse to breaking a rule or two. But when her curiosity gets the better of her and she discovers Chase, a new teen locked in a cage in her guardian's basement, and witnesses him turn into a wolf before her eyes, the horrific memories of her parents' murders return. Bryn becomes obsessed with getting her questions answered, and Chase is the only one who can provide the information she needs. But in her drive to find the truth, will Bryn push too far beyond the constraints of the pack, forcing her to leave behind her friends, her family, and the identity that she's shaped?

What listeners say about Raised by Wolves

I was caught up in this story pretty much from the start. Told in the first person from the point of view of the heroine, Raised By Wolves is the story of Bryn, a human girl brought up by a werewolf pack. The author brings Bryn's voice across perfectly, and the reader is soon immersed in the dinamic's of pack life and the struggle of one girl to gain independence in a culture where the alpha's word is law. Raised By Wolves is not like the usual paranormal teen romance, which, insidentally, I love. It's a compelling tale of loyalty, friendship, self discovery and betrayal, and above all, a person's struggle to do what is right. Bryn is a strong heroine that any woman of any age can love. The werewolf genre is not perhaps as prolific as the vampire genre, but I believe this is one of the better additions. Bring on the sequel!

This is the second time I’m reading this book - though this is my first time doing it through audible. Coming to this book after years, I love it just as much as I loved it then. 100% recommend it to anyone who loves this genre. This is definitely something I will read again and again and again. The narration was flawless too, and only added to the overall absolutely amazing experience of the book.

We enjoyed parts of the story and other parts we just couldn’t wrap ourselves around. The story revolves around a girl named Bronwyn (Bryn) who was raised by a pack of werewolves. She seems like a typical teen, but has extra restrictions on her because she is around a bunch of werewolves all the time.

So, one of the major things we couldn’t wrap ourselves around is the punishment dished out on this girl for disobeying pack rules. Sorry, even for an adult, being beaten until you’re almost dead is a bit extreme.

One of the other major things we couldn’t wrap ourselves around was the ending. I am not going to spoil it here for anyone, but we just couldn’t accept the ending. She is human, she will always be human therefore the ending just couldn’t be accepted.

We think Eileen Stevens had an age appropriate voice for the main character, but the male characters seemed to sound almost all the same.

When I looked at this book on Audible.com I was very cautious at buying it - but my Daughter was more eager than any teen could imagine. She is werewolf crazy! She listened to it all in one day while it took me a few. The beginning was a little slow but as I got into it, I couldn't help but be at the edge of my seat! The author and the narrator were amazing. The end of the story was far from disappointing. This book is meant for all age groups and audiences. I would recommend it for anyone!

I hardly made it to the middle of the book and I'm not one to leave a book (or audiobook) without finishing it. Maybe I shouldn't be writing this. But I need a reminder of some kind about the narrator (Miss Stevens). It was awful! The voices were ridiculous, maybe she thought she was reading for very, very small children.
And the story? I won't even go there.

Maybe I'm just a little tired of werewolves.
This isn't a bad story, but I think it is most suitable for teenagers and early twenties.

What a pleasant surprise!

I purchased this book knowing nothing about the author, narrator, or series, but because it was on sale. I am so happy that I did. I'm not a huge fan of YA books, but this one was quite well done. The narrator does a great job of conveying the emotions of the characters. The best thing about this book was the twist the author threw in. I thought I saw where she was going with the story, but I completely underestimated her. I was as shocked and surprised as the main character. I highly recommend this one to fans of werewolves and YA lit.

Young readers. I think I might have outgrown this one by 14 or 15 at the most.

Would you ever listen to anything by Jennifer Lynn Barnes again?

Her male voices were pretty odd. And she did not have much expression. She mispronounced a couple of words.

If you could play editor, what scene or scenes would you have cut from Raised by Wolves?

I found the whole first part to be a bore - middle school rants against parents rules went on and on and on. Not much of a plot all that time - no action. Should have condensed it. I did not listen past the first hour and a half. And I like YA books most of the time, if they are good ones.

Author doesn't understand what irony is - misused it. At that point, I shut it off.

I could not put it down. OMG. LOVE LOVE LOVE. this is the third time listening.

I loved the story, but could only stand to listen for so long. the Narrator has a thing with like a gulping or swallowing noise as she reads and it detracts from the listening. Maybe I am just sensitive to the wierd little noises...

Didn't finish due to spoilers, but still loved it.

What made the experience of listening to Raised by Wolves the most enjoyable?

I love how strong Brynn is;mentally and physically. She doesn't let her disadvantages take over. She knows she is just human, but she makes the best out of it. The narrator was great as always, I love Eileen.

Have you listened to any of Eileen Stevens’s other performances before? How does this one compare?

Yes, its pretty good. She does a really great job at narrating. I love the diversity she adds to the characters. You can tell a difference in all of the voiced characters.

This book gave me a lot of feels. The parts where she would wolf out and would be all "blood. blood. blood" would weird me out, but i love the moral of it. I loved the story and kind of wish and didn't wish that i would have read spoilers.
SPOILER BELOW****

I wish I hadn't because I would have liked to read the series in its entirety; I'm glad i did read the spoilers because I am a happy ending kind of girl. I like for the books I read to end somewhat decent. I loved Divergent, and when Tris died I cried for DAYS! Call me what you will, but i just hate it when they off a main character. I seen in the spoilers that Chase died :,( I probably shouldn't have read them, but alas, I am a very impatient person. Knowing that he dies makes me not want to read the series further. Why can't authors just give us the dang ending we want, however cliche it may be. I read to experience a different level of adventure and these epic love stories are what keeps me going. I am a hopeless romantic and the fact that Chase dies and Brynn will have to live without him makes me sad.

Other than what is mentioned above, i did like this book. I will say this. If you are like me and want the nice predictable happily ever after, this series isn't that.

What did you love best about Raised by Wolves?

What was one of the most memorable moments of Raised by Wolves?

The bonding scene between Chase and Bryn. Very intense.

She made Bryn accessible. Though I will say her Callum voice was odd.

Yeah, I really liked it!

Why doesn't Audible have books 2 and 3 for purchase? They've been out for a while. Not very fair to leave us hanging...