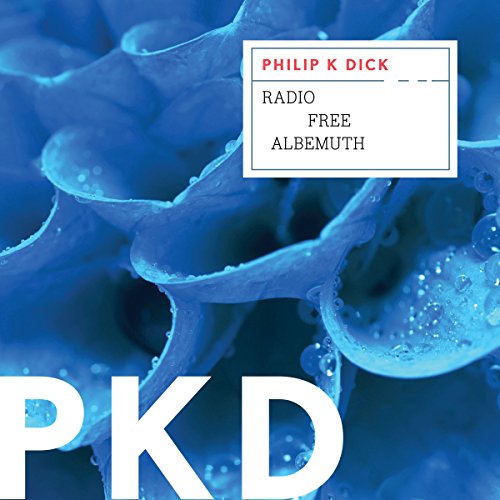 In Radio Free Albemuth, his last novel, Philip K. Dick morphed and recombined themes that had informed his fiction from A Scanner Darkly to VALIS and produced a wild, impassioned work that sounds like a visionary alternate history of the United States. Agonizingly suspenseful, darkly hilarious, and filled with enough conspiracy theories to thrill the most hardened paranoid, Radio Free Albemuth is proof of Dick's stature as our century's greatest science fiction writer.

A lot of semi-autobiographical elements

While this is not PKD's best science fiction, the fact that much of it comes from his own experiences makes this an interesting read.

From being burgled, by what PKD believed to be an FBI covert operation, to hallucinatory visions, this posthumous book reveals much about his thought processes at the end of his life. Although this novel was written and scrapped, it was released in 1985 and has similar themes to his Valis series. In this, PKD plays a main character himself as a science fiction writer, while Nicholas Brady, a quirky record shop clerk, is his friend although he represents parts of the author himself.

In this dystopian science fiction, an alternate reality shows the US being run by a secret Communist regime despite appearing to be the opposite. Brady one day starts seeing visions in which he is controlled and he is able to communicate with an outer being who is trying to change the course of the country. His sceptic friend, PKD follows him wherever he goes only to find that there are some truths to his ravings.

It's quite a horrifying ending, and it does make you wonder how mentally stable PKD was at the end - but it definitely shows why PKD is still the master of sci-fi.

Can P.K. Dick please stop being so damn ahead of his time?! I promised myself I wouldn't read any more books about the current depraved political landscape, and I just wanted some nice trippy escapism. Somehow I forgot how poignant this 1976 book would be...

Get this: In Radio Free Albemuth (the sort of 4th book post-script of the VALIS trilogy), there is a dystopian present in which the president is below average right-wing idiot who has used the lowest common denominator of paranoia to claw his way to the top. He's actually a secret Russian agent though, and has a lame son named Don!

Somehow Dick was able to predict that the worst America could offer wasn't some highly intelligent dictatorship, but a pathetic state where misinformation and fear would dumb down the public enough that the most cynical fascists could easily take over. It all comes across as very familiar, sigh~

Ostensibly, Ferris F. Fremont is an analogue of Nixon. Although the 666 aspect seems like Ronald Wilson Reagan as well. The politics of Radio Free Albemuth are all over the place, in excellent P.K. Dick schizo fashion, with satires of Berkeley radicals. And the take on how intelligence agencies actually prefer corrupt politicians as easier to exploit is extremely fascinating. It's about sci-fi Gnosticism as much as anything else, with "God" as a pink light feeding information in order to save the world, and all the mindfucks therein contemplating such.

I happen prefer the first half of the book, which is pseudo-autobiographical in which Phil narrates and talks about his crazed friend Nick. Then it gets into Nick's point of view which has far more theological ranting. And, being that this is Dick, the writing isn't always polished but it does have a certain brilliant energy so don't overly nitpick.

Essential reading for latter-Dick cannon, but do ignore if you are in the mood to ignore the daily onslaught of Prez T****.

The Pistol to the Head

"This, I realized, is how a man becomes what he is not: by doing what he could never do"
- Philip K Dick, Radio Free Albemuth

My brother and I were discussing how PKD would absolutely lose his shit to see how much the world has become what he wrote. I think he would AND wouldn't be surprised by Facebook, the NSA, the surveillance state, cellphones, robots, talking refrigerators, fake news, pharmaceuticals, Trump, perpetual war, fake news, virtual reality, corporatism, etc.

For me this book was a bit of post-Trump-election therapy. Well not therapy. No. Perhaps, acquiescence? Resignation? The resemblance between Ferris Fremont seemed uncanny. Even the relationship between the election of Ferris Fremont and the Russians seemed a bit too close to reality:

"Why should disparate groups such as the Soviet Union and the U.S. intelligence community back the same man? I am a political theoretician, but Nicolas one time said, 'The both like figureheads who are corrupt. So they can govern from behind. The Soviets and the fuzz, they're all for shadow governments. They always will be, because each of them is the man with the gun. The pistol to the head."

The second part of this book that was fascinating was the semi-autobiographical presentations of Dick's own 2-3-74 experience with the "vesicle pisces" and the "pink beam". This experience in February - March of 1974 lead to PKD's gnostic trilogy (VALIS, The Divine Invasion, The Transmigration of Timothy Archer) and his later assembled The Exegesis of Philip K. Dick. This novel was the first he wrote AFTER his visionary experiences of 1974, and every work after seemed impacted by this experience. There is a part of me that thinks the probability of a PKD religion coming into existence is fairly high. Hell, if Hubbard's Scientology can exist, why not one that worships a Vast Active Living Intelligence System?

Written in 1976, still relevant...PKD !
Thank you Phillip, still very much alive...one with our lord and savior...see you soon.

Not a mental place I Like to be in

This is a rehash of the same material that appears in the VALIS trilogy and in his Exegesis. I don’t know what happened in his private life 1974. He may have had a true series of supernatural experiences, he may have had delusions, or intentionally have been making things up, for whatever reason. I'm not that interested in what happened. It is a bit like watching an automobile accident in progress. You know what is going to happen, there is nothing you can do about it, and you can't stop watching. But, this book along with the Exegesis are the prolonged work of a man who was engaged with the world around him and the history of ideas. There is something to that...even if it does go on and on...

I recommend this book to people who are interested in everything written by PKD or for those who are interested the ramblings of a character who is probably paranoid and probably living in a fantasy world in which he is the center of huge supernatural conflict and national controversy. Be prepared for lots of Gnostic Christianity.

Dont be too disappointed.

If you read this as a "remedy" for Donald Trump you might find that this is another case where the side-effects of the "cure" are just as bad as the disease.