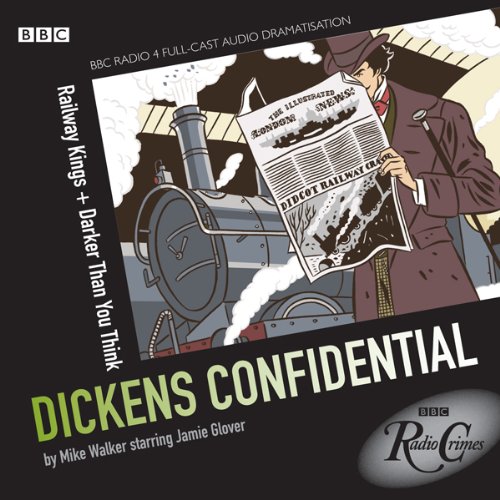 Charles Dickens was, for a time, editor of a daily newspaper. This series takes an imaginative look at how Dickens would have tackled bringing the news to the masses.

'Railway Kings'
As editor of a new campaigning weekly, The Herald, he has just appointed a chief correspondent - Jack Marshall, an eager and rather handsome young man. Agnes Paxton (daughter of Joseph Paxton, Railway King, and part-owner of the paper) is in charge of petty cash.

The first lead that Jack needs to chase up is who, or what, is responsible for a tragic railway accident. An awkward investigation when a Railway King and his daughter are so close to home!

'Darker Than You Think'
Bodies are being discovered in the Rive Thames with dreadful injuries. The rumours abound that it's Spring Heeled Peter - but the Inspector in charge of the case just wants the culprit found before anyone else is killed. Chief Correspondent Jack is sent to investigate but Agnes seems rather more interested in her new beau, a pioneering and seemingly philanthropic doctor, than following the progress of his leads.

If you like your Charles Dickens you should find these enjoyable.
Full cast productions with professional actors who bring to life the the characters taking the listener back in time to the acrid Victorian era with its city sounds and humid smells.

The editor needs to run a news paper of truth, bringing the real world of the poor and the rich to the forefront of society. Young Will keeps the paper on its toes as he goes hunting full charge ahead looking for the the real London hidden behind the closed doors of the elite rich who own the City, but as with everything in Victorian days, decorum must win the day. Challenges ahead for both the editor and his two young charges who fight for what they believe Londoners should read on their front page. That is 'putting the people on the page with the aim of making Real Change.

My only quip is - we WANT MORE of these programs. Many were made but why are they not available on audiobooks?

The plays are a bit short and the storyline is a bit thin. I feel that these 3 plays are part of a series and if I knew the rest I would have enjoyed them more. Dickens seems not to have such a starring role though, which I felt was slightly misleading. They were entertaining but not excellent.