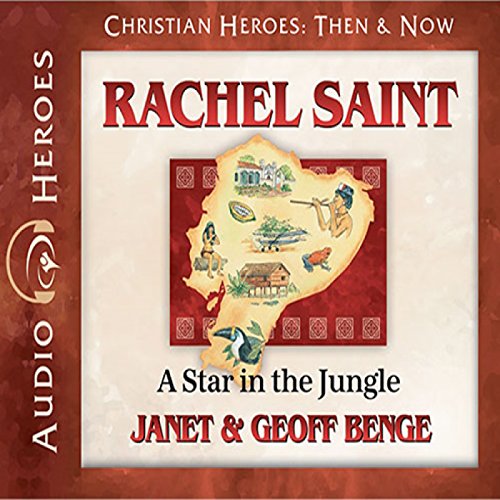 Rachel Saint: A Star in the Jungle

By: Janet Benge,Geoff Benge
Narrated by: Rebecca Gallagher
Try for £0.00

Aboard the Aquitania, Rachel became aware of something strange happening to her. It was as if she were not on the deck of the ship anymore but was instead in a jungle clearing, looking at a group of brown-skinned, half-naked people. The people beckoned her to come. Suddenly the scene vanished, and Rachel fell to her knees and prayed.

When young Rachel Saint surrendered her life to God, she began an unimaginable journey that would span decades and radically transform a dying culture steeped in revenge. Against all odds, God would lead her to Ecuador's Waorani Indians - known as Aucas, or savages, and infamous for murder.

Despite the martyrdom of five missionaries by Waorani spears, Rachel boldly persisted in following God. In one of the greatest testimonies to God's grace and power in our time, this pioneering Bible translator would live for two decades with her own brother's killers, for the joy of seeing them become brothers and sisters in Christ. (1914-1994)

What listeners say about Rachel Saint: A Star in the Jungle

Incredible story of the Salvation of headhunters!

This is such an amazing story of how God gave a young woman a vision of the people who needed the salvation of Christ, and eventually how God used her to fulfill that vision in bring Salvation to those who killed her brother!

This is a beautiful story! Rachel Saint loved her people and did a great work for the kingdom.

What an eye-opening account of God’s ways. God can change anyone’s heart. I can’t wait to listen to Nate Saint’s book.

a life with purpose

a challenging story of a life surrendered to God. Well
written and easy to listen to.