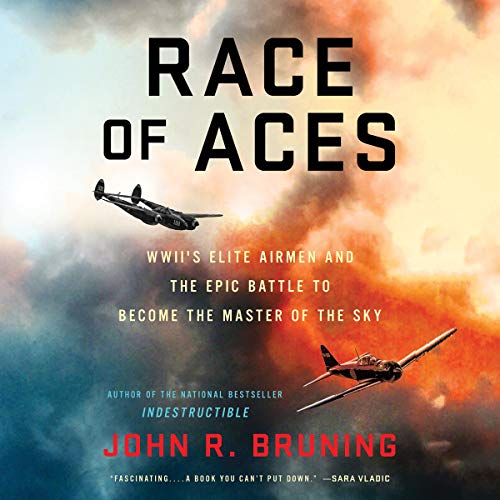 WWII's Elite Airmen and the Epic Battle to Become the Master of the Sky
By: John R. Bruning
Narrated by: Brian Troxell
Length: 16 hrs and 52 mins
Categories: Biographies & Memoirs, Memoirs
5 out of 5 stars 5.0 (1 rating)

"Brings you into the cockpit of the lethal, fast-paced world of fighter pilots...Fascinating." (Sara Vladic, New York Times best-selling coauthor of Indianapolis)

"Extraordinary...A must-read." (US Navy Captain Dan Pedersen, founder of the Topgun program and best-selling author of Topgun: An American Story)

"Vivid and gripping...Confirms Bruning's status as the premier war historian of the air." (Saul David, author of The Force and Operation Thunderbolt)

The astonishing untold story of the WWII airmen who risked it all in the deadly race to become the greatest American fighter pilot.

In 1942, America's deadliest fighter pilot, or "ace of aces" - the legendary Eddie Rickenbacker - offered a bottle of bourbon to the first US fighter pilot to break his record of 26 enemy planes shot down. Seizing on the challenge to motivate his men, General George Kenney promoted what they would come to call the "race of aces" as a way of boosting the spirits of his war-weary command.

What developed was a wild three-year sprint for fame and glory, and the chance to be called America's greatest fighter pilot. The story has never been told until now.

Based on new research and full of revelations, John Bruning's brilliant, original book tells the story of how five American pilots contended for personal glory in the Pacific while leading Kenney's resurgent air force against the most formidable enemy America ever faced.

The pilots - Richard Bong, Tommy McGuire, Neel Kearby, Charles MacDonald, and Gerald Johnson - riveted the nation as they contended for Rickenbacker's crown. As their scores mounted, they transformed themselves from farm boys and aspiring dentists into artists of the modern dogfight.

But as the race reached its climax, some of the pilots began to see how the spotlight warped their sense of duty. They emerged as leaders, beloved by their men as they chose selfless devotion over national accolades.

Teeming with action all across the vast Pacific theater, Race of Aces is a fascinating exploration of the boundary between honorable duty, personal glory, and the complex landscape of the human heart.

"Here is a true story with something for everyone. Love, war, treachery, adventure, and above all an intimate portrait of the made-for-Hollywood life of a man who broke all the rules and remade them to his liking...Bruning shows us a big-hearted man determined to save his family - and a brilliant scientist-pilot who was determined to win the war along the way." (Adam Makos, New York Times best-selling author of A Higher Call and Devotion)

"This is a beautifully told story of a family separated by war, and of an extraordinary father, driven to avenge his family, who by sheer force of character changed the nature of warfare. A superbly told tale of love, honor, courage, and devotion." (Alex Kershaw, New York Times best-selling author of Avenue of Spies)

Enter the aviation world of the Ace.

Very well told story. Full of historic fact and heroic deeds in the air. Tinged with the sadness of a competitive breed that unfortunately leads too sorrow and loss. A must for all those into the history of aviation within the sphere of war.

It reads like fiction. It bleeds like history. So appreciative of the research John Bruning put into this masterpiece.

This topic holds a special interest to me. It is something I have studied most of my life as my father was in many of the places the 5th AF traveled to. It is an assembly of a lot of research on the different fighter groups and meshing them all into a timeline. With familiar characters and places the book does tell a really interesting story and lends perspective on exactly what pilots were willing to do in order to become the Ace of Aces. While the story is great, the narrator is not. He made the book very hard to listen to and struggled with many of the pronunciations of places. The book was very well researched is still well worth the listen or read. You will not regret purchasing!

I was unaware of this epic Fighter Ace competition. Dick Bong was a name I'd never heard of before this book. I'm glad this book is available so that his an all the efforts of the WWII veterans don't get forgotten.

Defines the Term. “The Right Stuff”

One of the finest literary works of our era. Take a peek at the lives of our Air Aces of The Southwest Pacific during WW2

Very interesting. Enjoyed the readers voice. Good historical account of brave fighter pilots in ww 11 and their families. Would make a good movie. Recommded to the audio book fans. Carolyn

This is book brings history to life!

I first heard about this book on Facebook from one of my Facebook friends who flys world war two aircraft at air shows. He posted that his friends new book was amazing. Let me tell you it is! The way this book is written brings the ace race to life and the narrator does an amazing job reading it.

This listen was one of my favorites the narrator kept me riveted and eager to hear the next part of the Ace race!

Just as good as Indestructible! I highly recommend this for anyone who enjoys reading about World War 2.

Really enjoyed this book. I’ve read many books on WWII and this fits in the excellent category. I was not aware of the race described in the book. Sheds a lot of light on an often overlooked theater of operations. Highlights the challenges and tragedy that is war while still focusing on the amazing accomplishments of brave men doing an increasingly dangerous job.